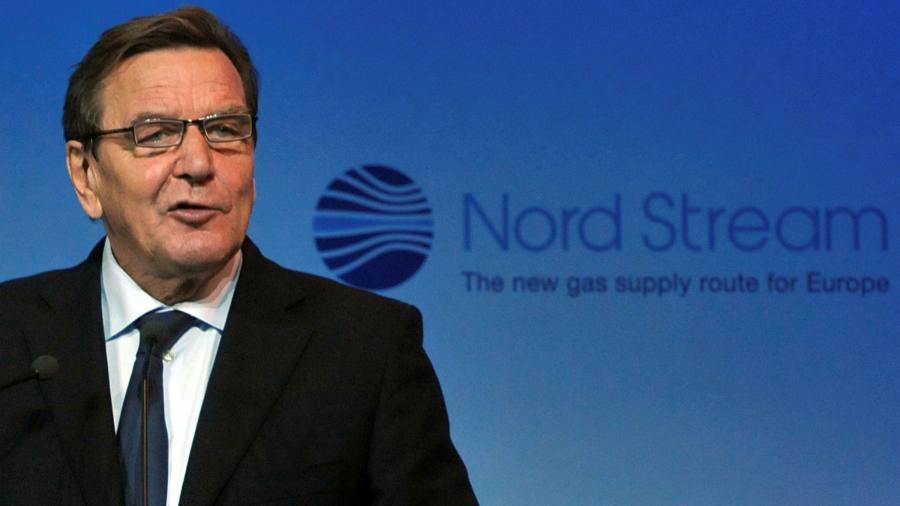 Gerhard Schröder, the former German chancellor, has been nominated to join the board of Russian energy giant Gazprom, fueling scrutiny of his close links to the Kremlin-controlled company as tension mounts between Moscow and the west over whether Russia is preparing to invade Ukraine.

Gazprom is also facing criticism over whether it has stoked a gas crisis in Europe by sending fewer supplies than in prior years. The group on Friday said it had proposed Schröder as a candidate to be appointed at its annual shareholder meeting on June 30.

In the list of 11 candidates to the board, Schröder is set to replace Timur Kulibayev, the son-in-law of Kazakhstan’s former long-serving president Nursultan Nazarbayev.

Schröder served as Germany’s chancellor during the early years of Vladimir Putin’s presidency in Russia. He joined the board of directors of Rosneft, Russia’s top oil producer, in 2017.

He also has close ties to Nord Stream, the Gazprom-controlled pipeline bringing gas from Russia to Germany. Schröder became head of the shareholders’ committee of Nord Stream shortly after leaving office and is president of the administrative board of Nord Stream 2, a new branch of the pipeline that will double its capacity. The new pipeline is still awaiting regulatory approval in Berlin.

Berlin’s allies in the US and Europe have harshly criticized both pipelines for potentially making the EU even more dependent on Russian energy exports. Nord Stream 2 is at the heart of debate over potential western sanctions on Russia in case Moscow invades deeper into Ukraine.

Ursula von der Leyen, president of the European Commission, this week said Russia was “using gas supplies as leverage on us” and that Gazprom had “cast doubt on its reliability” by restricting supplies to Europe at a time when prices have soared to record levels.

Gazprom and Putin have repeatedly said the company has fulfilled all requests for supplies.

Schröder’s board nomination at Gazprom will prove controversial in Germany at a time when his defense of the Kremlin is proving increasingly embarrassing for his party, the Social Democrats, and Olaf Scholz, the current SPD chancellor.

Scholz is due to visit US President Joe Biden next week in his first trip to the US since taking office late last year.

Schröder is considered a close friend of Putin, whom he once referred to as an “impeccable democrat”. Putin took a Cossack choir to Hanover to celebrate Schröder’s 60th birthday in 2004 and 10 years later the former chancellor marked his 70th birthday in St. Petersburg, at the height of the crisis over Russia’s annexation of the Crimean peninsula.

He has also intervened in the Ukraine crisis, criticizing Kyiv’s requests for weapons from the west as “saber-rattling” and blaming NATO for Russia’s troop build-up on Ukraine’s border.

“Schröder acts like Putin’s lobbyist, he works and is paid for it,” said Norbert Röttgen, a prominent MP for the opposition Christian Democratic Union. “It’s a shame.”

Neither Schröder nor his office responded to a request for comment.

His nomination to Gazprom echoes the appointment of other former senior western politicians to prominent positions in Russian business. France’s former prime minister François Fillon joined the board of directors of Zarubezhneft, a Russian oil company, last year.