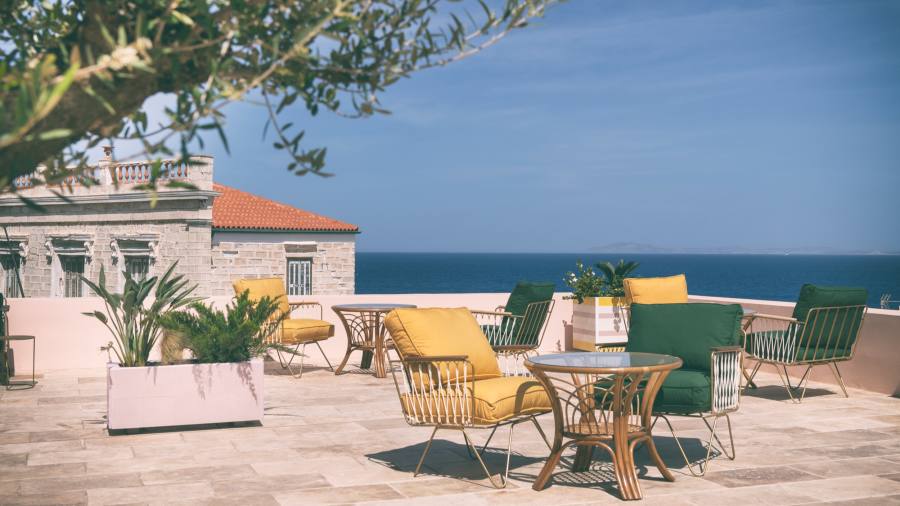 An artsy idyll on Syros

If the Cyclades is where you want to be this summer, consider the less-trod island of Syros. Avid readers of the FT Weekend‘s travel pages may recall a story last year written by self-described “accidental hotelier” Oana Aristide. In 2017, she and her sister fell for and purchased a large neoclassical mansion in Hermoupolis, Syros’s main port, leaving behind lives overseas to fill its lofty spaces with contemporary art and furniture – until the pandemic hit. Having completed just enough to stage a very soft opening over part of last season, the Aristide is now set to make its official debut as a full-service hotel on 1 April. Its six suites have expanded to the nine originally planned: three with private terraces, pools and Aegean views for days. There is also a rooftop restaurant (its kitchens provisioned by an organic smallholding just outside town) and a program of artist residencies, with a workshop and dedicated gallery space where they will exhibit. Bookings from 1 April, from € 240 per night; hotelaristide.com

Swim with gentle giants in Dominica

Sperm whales are the Bengal tigers of marine-mammalian species: huge, charismatic, alpha even when female. Their brains are about five times heavier than a human’s, and, like humans, they live and socialize in extended family groups. Dominica, the small Caribbean nation booked by Martinique and Guadalupe, is the only place on earth where sperm whales reside year-round – its deep-water canyons make it the ideal habitat for them. The UK-based eco-adventure fixer Will Bolsover has just added a handful of dates throughout 2022 to experience a seven-day swim-dive “safari” that puts his clients in the water with the whales (responsibly, in very limited numbers; only four people, plus a guide – who will also take photographs – are permitted at a time). From £ 6,740pp for seven days and six nights; naturalworldsafaris.com

From Homestead Modern – known for spare and chic vacation houses across Southern California’s inland deserts – comes a buzzy new venture: The Bungalows at Homestead Modern, a 14-room hotel spread across three single-storey buildings in the grounds of the Joshua Tree Retreat Center , just a few minutes’ drive from Joshua Tree National Park. Designed in 1960 by LA-based architect Harold Zook (a protégé of Swiss-born Albert Frey, whose work in Palm Springs made him one of the fathers of desert modernism), the bungalows have been rehabilitated by designer Brad Dunning. Dunning’s A-list clients entrust him with their landmarked Hollywood Hills houses; here, he has hewn to period, whenever possible using materials and fittings that would have been in production when the bungalows were built. Concrete floors have been polished and laid with natural-fiber rugs, furniture updated, patios extended: even the landscaping was cleared of non-native plants and replaced with the jojoba, creosote and saguaro that grow naturally across the Center’s 162-acre campus. Guests have access to all the activities offered by the Center, including guided walks and meditations, and yoga, tai chi and qi gong classes. From $ 250 per night; retreat.homesteadmodern.com

Ready to recoup that deferred villa holiday? Welcome Beyond, the design-centric lettings company, has some interesting propositions for 2022: among them SynVillan, a Thomas Sandell-designed glass-and-steel house on stilts in the Eriksberg Hotel & Nature Reserve on the southern Swedish coast. Its two rooms total 50sq m, sleeping four, and it is entirely solar-powered, with no running water and an eco-toilet; but it is also part of the larger hotel, to whose services SynVillan guests have full access (including meals in the hotel restaurant). Otherwise you’ll lack for no other comfort, and be spoiled by majestic sea and island views. If you’re after warmer swims (and a far bigger splurge), the team at Scott Williams – which excels at private Ionian-Island holidays – has a new cliffside three-bedroom house on Corfu’s north-east coast. Niris sleeps just six, but it goes long on luxe-villa amenities, among them two outdoor bars, one major outdoor dining terrace, a 25m stone pool, and various sunning / reading / napping terraces along meandering paths, all of which lead to private sea ​​access. SynVillan, from £ 438 per night half-board; welcomebeyond.com. Niris, POA (including chef); scottwilliams.co.uk 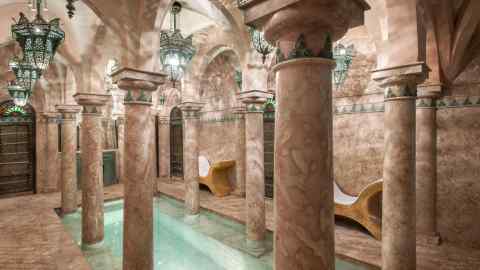 
Red Bull Racing’s Christian Horner: ‘My job is to push as hard as I can’