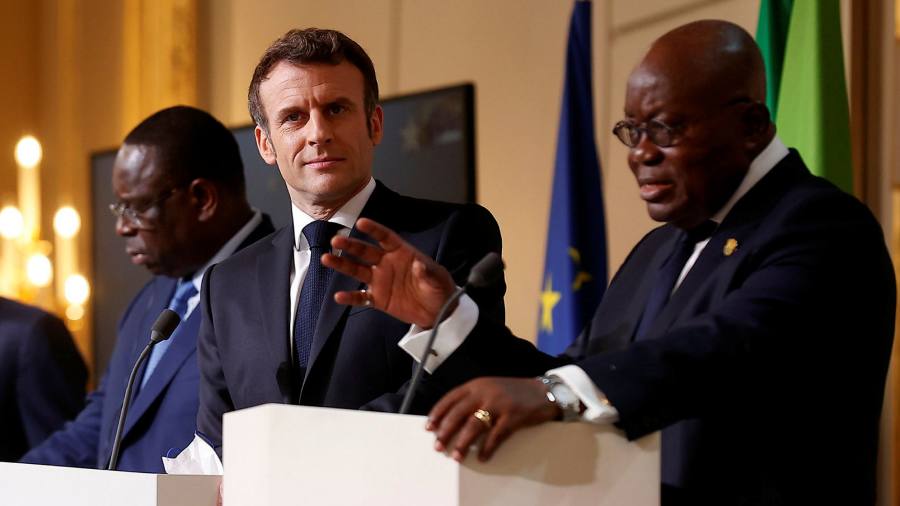 France and its European and west African allies have announced they will shift the focus of their anti-terrorism campaign in the Sahel eastward to Niger and south to the Gulf of Guinea after being pushed out of Mali by an unco-operative military junta.

“The two terrorist organizations al-Qaeda and Isis have chosen to make Africa – particularly the Sahel and now increasingly the Gulf of Guinea – a priority in their strategy of expansion,” French President Emmanuel Macron told a news conference in Paris on Thursday.

France and European countries contributing to a combined special forces group called Takuba that helps Sahel governments fight Islamists have said they can not work with Mali’s military rulers, who have rejected demands for a return to democracy and hired nearly 1,000 mercenaries from Russia’s Wagner group to protect themselves .

A joint declaration by France and its European, African and Canadian partners in the Sahel military operations said they were ready to extend their support to “neighboring countries in the Gulf of Guinea and west Africa”.

Macron said they would withdraw from Mali, which has been at the heart of the French-led campaign since French forces recaptured northern towns such as Timbuktu from the Islamists in 2013, over the next four to six months and redeploy across the border in Niger.

The French president was flanked by two west African allies, presidents Macky Sall of Senegal and Nana Akufo-Addo of Ghana, whose countries’ northern regions fringe the Sahel. Both said they appreciated French and European military support for the region.

French officials have said Paris has about 4,300 soldiers in the Sahel, of whom nearly 2,500 are in Mali. In all, there are 25,000 international military personnel in the region, including those with UN peacekeeping operations and an EU military training mission, both of which are expected to maintain a presence in Mali.

Islamist militants – long active in the Sahel region on the southern fringes of the Sahara – have recently been targeting coastal states such as Nigeria and Benin. Nine people were killed in three bomb explosions in northern Benin earlier this month. France later announced that its forces in neighboring Burkina Faso had killed 40 jihadis it said were responsible.

Speaking after Thursday’s announcement, Akufo-Addo said terrorists could not be allowed to “find a permanent home in west Africa”, having been chased from the Middle East and Afghanistan.

“All of west Africa, including the coastal states. . .[is]vulnerable to the penetration of terrorist outrages, ”he said. “We are therefore re-examining with our friends and partners the manner in which we can respond.”

Akufo-Addo is head of the Economic Community of West African States, which together with the EU has imposed sanctions on Mali. 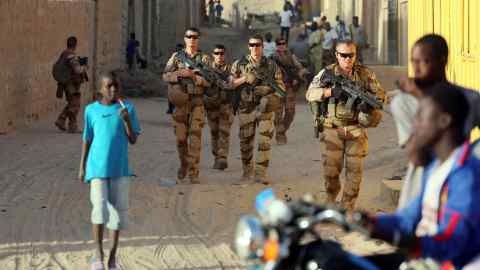 Sall, who is currently head of the African Union, said on Thursday: “We are glad that commitments have been renewed to stay in the region and reorganize the forces. The struggle against terrorism in the Sahel cannot be a matter only for African countries. ”

Mali’s armed forces spokesman Souleymane Dembele shrugged off France’s announcement. “I think there has been no military solution, because terrorism has engulfed the entire territory of Mali,” he said, according to Reuters.

A former Malian diplomat said: “I understand the French reaction and I also understand the frustrations that Malians have based on the perceived failure of a French intervention that has been going on for eight years.

“It’s clear France saved Mali in 2013 when terrorists were heading down towards Bamako. But we’ve come a very long way since 2013, ”the former diplomat added. “The French have exceeded their stay and their mandate. They have gone way beyond the military intervention they were asked and have interfered quite a lot in Malian politics. ”

Macron said he rejected the suggestion that French operations had failed, arguing that Mali would have collapsed or part of it been turned into a caliphate without the intervention nine years ago, while French forces had been successful in keeping terrorist groups at bay and killing their leaders .

But he did lay out new ways of adapting the operations, including a focus on the Gulf of Guinea, more investment in government services such as schools and a reduced military footprint with mobile support for national armies rather than large fixed bases.