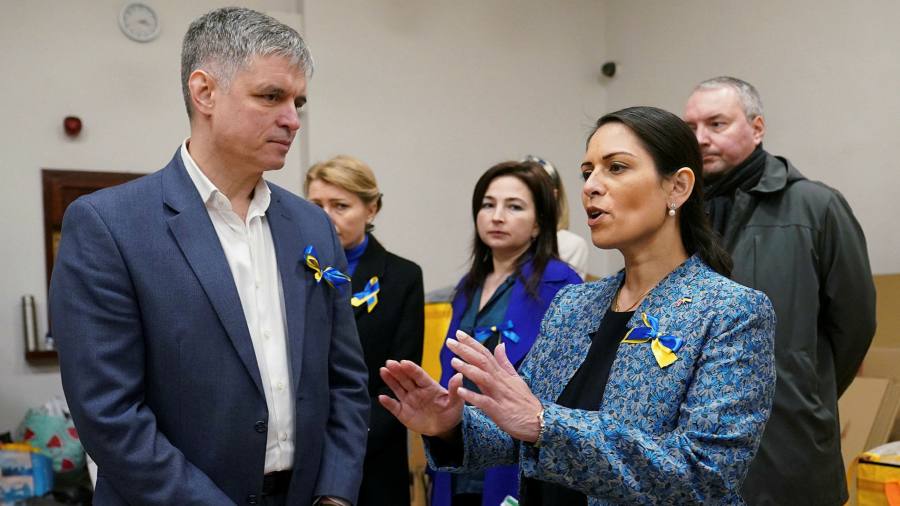 France on Sunday urged Britain to act quickly to solve a visa blockage stopping some Ukrainian refugees from reaching the UK from Calais, with French interior minister Gérald Darmanin calling the situation “inhumane”.

Darmanin told CNews TV that out of a total of 400 Ukrainian refugees arriving in the northern French port after the Russian invasion, some 150 had been unable to cross into Britain.

They had been told to go to Paris or Brussels to process visa applications, he added. Darmanin said he had asked Priti Patel, UK home secretary, to set up a special consulate in Calais to process their paperwork.

“These are exceptional circumstances, we have to stop this bureaucratic fastidiousness,” Darmanin said. He added he had a good relationship with Patel. “She will solve this problem. But she needs to do it quickly. ”

In a letter to Patel, Darmanin said the British response so far was “completely unsuitable” and showed a “lack of humanity” towards refugees who were often “in distress”.

In the letter, seen by Agence France-Presse, Darmanin wrote: “It is imperative that your consular representation – exceptionally and for the duration of this crisis – is able to issue visas for family reunification on the spot in Calais.”

Patel has insisted that Britain will not waive visa requirements for refugees seeking to join family in the UK, arguing that she fears hostile actors could exploit such a waiver.

However, Patel insisted people were not being turned back at Calais. The home secretary said: “Let me just correct what has been said by the French government. The British government is not turning anybody around or turning anybody back at all. ”

She added: “I have staff in Calais to provide support to Ukrainian families that have left Ukraine to come to the United Kingdom. It is wrong and it is inaccurate to say that we are not providing support on the ground. We are. ”

Some 2,500 Ukrainians had arrived in France since the start of the Russian onslaught, with some then looking to go to Spain and Portugal as well as the UK, Darmanin said.

Britain has set up an extended visa scheme for Ukrainian refugees with family in Britain, which Patel said could extend to as many as 200,000 people.

The UK government said it had sent extra staff to visa processing centers in countries close to Ukraine, including Poland, Moldova, Romania and Hungary.

The Home Office said on Sunday that “around 50” visas had so far been approved for Ukrainian refugees across all the processing centers. Patel said the UK was “doing everything possible” to speed up the processing of visa applications.

Asked whether it was acceptable that less than 1 per cent of submitted applications had been processed in the first 48 hours in which the scheme has been operating, Patel said: “Let’s be clear, this is the first scheme in the world that’s up and running in this short period of time.

“I’m surging staff across all application centers across the entire European Union as well as in border countries such as Poland, where I was the other day and obviously where huge numbers of people are coming through.”

Speaking on a visit to a Ukrainian social club in west London, she added: “This is an incredible scheme and we are doing everything possible, surging capacity across every single application center across the EU.”