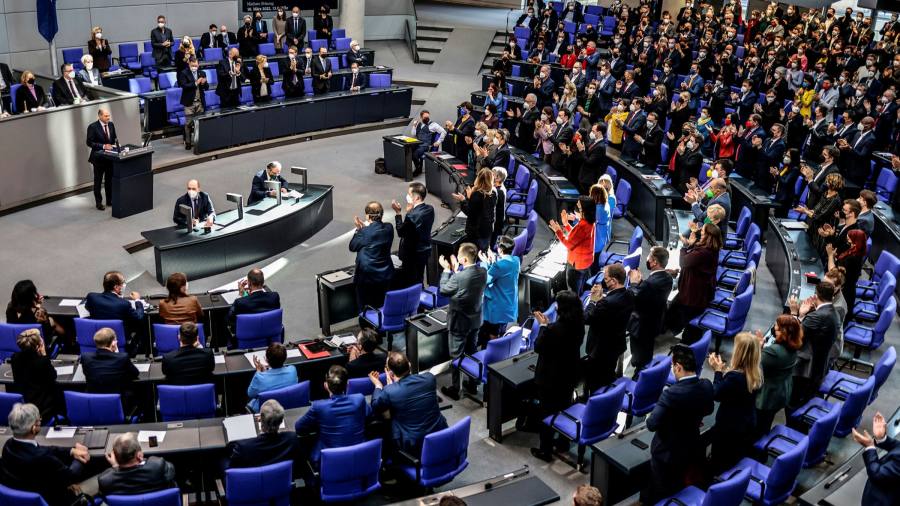 In the space of 30 minutes, Olaf Scholz overturned decades of German foreign and defense policy.

Speaking to the Bundestag in a special session on Sunday, the chancellor announced a massive € 100bn fund to modernize the military. He also vowed that Germany would finally meet its Nato commitment to spend 2 per cent of gross domestic product annually on defense – up from the 1.5 per cent currently spent that has long frustrated allies.

The plans could mark a watershed moment for the way Europe’s largest economy engages with the world.

Coming into office barely three months ago, Scholz’s cabinet had taken the reins from Angela Merkel with an ambitious plan of domestic modernization, and seemed reluctant to be sidetracked by a foreign entanglement or make any moves that could hit the economy.

“President Putin created a new reality with his invasion of Ukraine. This new reality requires a clear response, ”Scholz said. “We have given it.”

His words left observers reeling. Ukraine’s ambassador to Germany, who earlier on Sunday criticized the government for doing too little for Ukraine, called the Bundestag session a “truly historic moment”.

Images of the destruction visited on Ukraine – and growing public outrage over German hesitancy to act – have pushed Scholz’s cabinet to outline a plan of action that critics and allies alike had unsuccessfully demanded for years.

The new plan upends many traditional German policy dogmas – from pointing to its second world war legacy to justifying avoiding military expenditures, to its focus on trade and dialogue instead of tougher stances towards authoritarian states.

“There has been a lot of shock, but also a sense of shame and guilt – that we underestimated what Putin would do, that we believed our weapons would not make a difference,” said Thorsten Benner, head of the Global Public Policy Institute in Berlin.

For weeks, the government stood by a longstanding German policy of not delivering weapons to active conflict zones. Foreign Minister Annalena Baerbock said that sending weapons would only increase the likelihood of violence.

Scholz, meanwhile, sparked pundits’ derision and social media memes over his seeming refusal to utter the words “Nord Stream 2”, let alone threaten to halt it. He finally agreed to suspend the Kremlin-backed pipeline this week, after months of dodging US pressure and sticking to the line of his predecessor, Merkel, that it was purely a commercial project.

On Sunday, Baerbock acknowledged the country was making a “180-degree turn”.

“Perhaps it is the case that Germany is today leaving behind a form of special restraint in foreign and security policy,” said Baerbock, from a Green party long known for its pacifism.

“If our world is different, then our politics must also be different.”

The first signs of the shift came on Saturday night when Germany, the last big country to resist plans to suspend Russian banks from the international payment system, Swift, finally accepted the move.

That same evening, after weeks of dragging its feet over allowing Estonia to send some East German howitzers, it agreed both to allow the transfer, and for the Netherlands to send 400 German-made rocket-propelled grenades.

Soon after that, Berlin announced its own plans to send missiles, armored vehicles, and 10,000 tons of fuel.

The new proposals required the three parties that make up the German government to kill some of their most treasured policies.

Scholz’s center-left Social Democrats are relinquishing their more open stance toward Russia, a principle many of its stalwarts held dear. They will also bolster support for a nuclear sharing agreement with Washington many were long wary of.

The chancellor now plans on replacing Germany’s aging Tornado jets, which can be loaded with nuclear missiles, with US F-35 fighter jets. He vowed, however, that the next generation of planes and tanks would need to be built in Europe – and in particular, France. 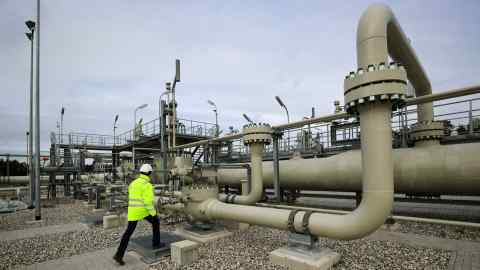 The Greens accepted a pledge to increase capacity for coal and gas reserves – as well as Scholz’s plan to build two liquid natural gas terminals to bring in LNG from Qatar and the US as a way to reduce its energy dependence on Russia, which provides Germany with 55 per cent of its imported gas.

From Germany’s pro-business and fiscally orthodox Free Democrats, finance minister Christian Lindner made an impassioned argument for taking on debt to fund the new plans: “It is not a debt, it is an investment in our future.”

The speeches on Sunday were met with bursts of applause and standing ovations in parliament.

But the real test is yet to come, when the aftershocks affect Germans themselves – whether they are cuts in Russian energy supplies, higher energy costs, or financial chaos for businesses resulting from the Swift sanctions.

“You can not change a world view overnight,” Benner said. “They will need to bring along the German public. . . and convince them the easy years are over, the good ride most of us have had since 1989 is something we will need to fight for again. ”

Scholz made a strong attempt in his Sunday speech.

The question facing Germans, he said, was “whether we allow Putin to turn back the clock, or whether we mobilize our power to set boundaries for warmongers like Putin”.