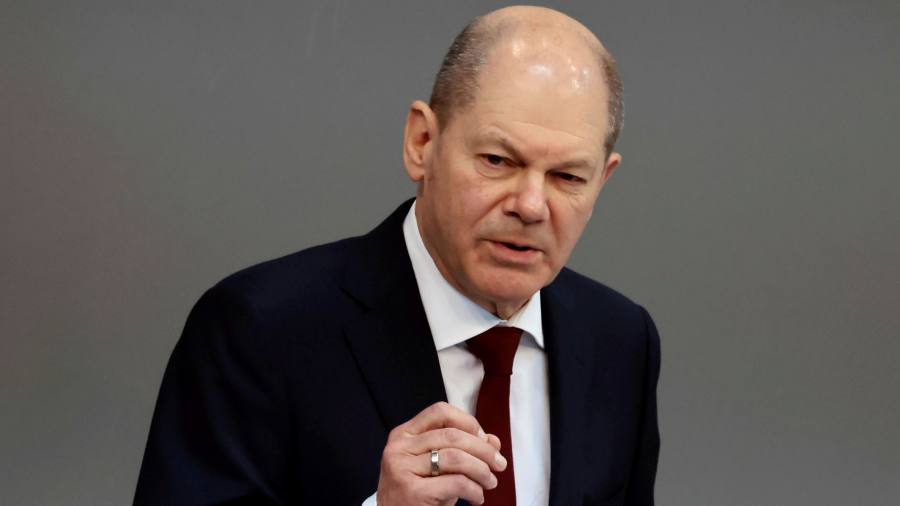 Germany has announced a big shift in defense policy in response to the Russian invasion of Ukraine, with Chancellor Olaf Scholz pledging a jump in military spending and a revamp of the armed forces.

“With the invasion of Ukraine, we are in a new era,” he told a special session of the Bundestag on Sunday, where many MPs wore yellow and blue in solidarity with Ukraine.

For weeks, Scholz’s government has withstood fierce criticism from rivals and allies over its reluctance to take a more aggressive position towards Russia. But he said recent developments and his own conversations with Vladimir Putin had convinced him the Russian president aims to build a new Russian empire, and that the defense of peace and democracy in Europe must be bolstered.

Scholz vowed to invest € 100bn this year in a special fund to modernize Germany’s military and, in the coming years, to boost annual defense spending above 2 per cent of gross domestic product.

As a NATO member, Germany has already pledged to spend 2 per cent of its GDP on defense but, like many of its European allies, it has almost never reached that target.

The pledges mark a critical turning point for Germany, which under Angela Merkel’s 16-year leadership pursued a policy of cautious engagement with Russia, for example backing the Nord Stream gas pipelines.

Merkel also resisted pressure from the US, in particular from then-President Donald Trump, to boost its defense spending. Germany refused to send weapons to Ukraine, strictly adhering to a restrictive arms export policy that bans weapons sales to conflict areas.

But Berlin has been forced to overturn those stances amid growing political and public pressure as Ukraine came under fierce attack. On Friday, Germany not only agreed to allow countries with German weapons to send deliveries to Ukraine, it also offered to send missiles, fuel and vehicles via Poland.

Scholz also vowed to bolster the German presence in eastern European Nato allies and to modernize the fighter jets needed for its nuclear sharing with the US. He pledged to purchase drones – long a contentious issue in Germany – and to build next-generation fighter jets and tanks that “should be built here in Europe, with European partners, especially France”.

The question facing Germans, Scholz said, was “whether we allow Putin to turn back the clock, or whether we mobilize power to set boundaries for warmongers such as Putin”.

Germany has also promised to speed up efforts to decrease its dependency on Russian fossil fuels. Scholz announced plans to construct two liquefied natural gas terminals as quickly as possible, and to build coal and gas reserves, buying more gas on global markets. But Scholz said he remained committed to Germany’s vow to become carbon neutral by 2045, and said he also wanted to build up renewable energy “as fast as possible”.

About 55 per cent of Germany’s gas imports come from Russia, a significant economic weak spot as it works with western allies to increase pressure on Putin.

Phil Mickelson is losing corporate relationships over his Saudi remarks