The risks cryptocurrencies pose to global financial stability could “escalate rapidly”, top policymakers warned on Wednesday, as they called for urgent action to ensure a crisis in the digital asset market could be contained.

The Financial Stability Board, which makes recommendations to the G20 nations on financial rules, said on Wednesday that policymakers must act quickly in crafting rules covering the digital asset market, given the tightening link with the traditional financial system.

“There is clearly a higher degree of urgency,” said Klaas Knot, the Dutch central bank governor who became chair of the Basel-based FSB in December, describing how the board had previously been “comfortable” saying there was no material risk from crypto because of its size and lack of connectivity to traditional financial markets.

“Now what we are seeing is. . . not only has there been a rapid increase in scale, but also, the touchpoints with traditional financial intermediation have increased and therefore it needs more focus from the FSB, ”he added.

The market value of crypto assets such as bitcoin and ether surged from about $ 350bn at the start of 2020 to above $ 3tn last year. It has since fallen to just over $ 2tn.

Some parts of the crypto market, and its connections with the rest of the financial system, are hard to assess because of “significant data gaps”, the FSB said.

So far, global regulators have greeted crypto with a patchwork of measures, including a severe crackdown in China, and the UK’s efforts to restrict crypto ads and register crypto companies for money laundering and counter-terrorism compliance.

The FSB is working on global standards for digital assets, which Knot said should “progress quite a bit in 2022”.

“There’s a strong push by all jurisdictions that feel that these risks are rapidly evolving,” he said. “If you have a server, you can take it under your arm and put it anywhere in the world and start issuing these assets, right?

“So this is truly of a global nature, a global business, that does call for a global and a globally harmonized co-ordinated response.”

In Wednesday’s publication on crypto risks, the FSB warned that the collapse of a big cryptocurrency could have an outsized impact by prompting a crisis in confidence in other asset classes.

Knot said it was impossible to predict the “destabilizing effect across the financial sector” of a run on even a single crypto asset such as a stablecoin – a type of crypto asset whose value is pegged to a fixed currency or basket of currencies. But he said the likelihood of contagion to other parts of the financial markets had “of course increased” in line with the sharp rise in the size of the crypto market.

The FSB also warned that big banks and other systemically important financial institutions were “increasingly willing” to gain exposure to crypto and pointed to global stablecoins as causing particular risks to financial stability.

“A disorderly run due to a loss in confidence on a [global stablecoin] that has reached significant scale could lead to disruptions in the real economy and spillovers into the broader financial system, ”the FSB said. 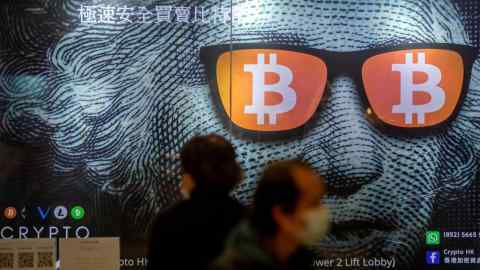 The FSB and other bodies are already doing work on how to address the risks from global stablecoins.

“Regulation is always a reactive business because innovation takes place in the industry,” said Knot. “We will always be in the second coach but I think the distance between the first and the second coach has become much smaller over time. There’s definitely more urgency now. ”