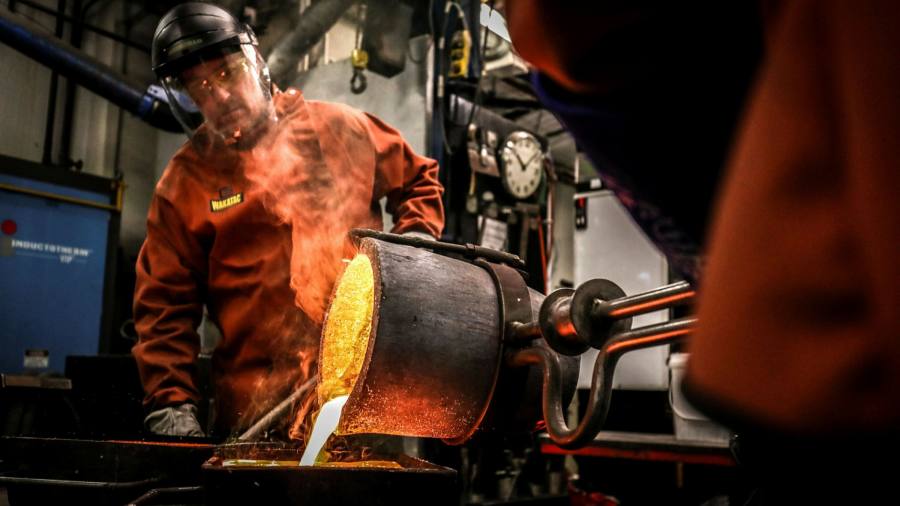 Gold has made a positive start to the year, outperforming bonds and equities as skittish investors scour the market for safe places to park cash.

The metal, used by investors as a store of value in times of stress, has climbed more than 5 per cent this month and broken above $ 1,900 a troy ounce on Friday before easing back to $ 1,888.

The crisis in Ukraine has provided the impetus for the advance, although analysts reckon gold is also benefiting from concerns that US growth could slow as the Federal Reserve is forced to act aggressively to get inflation under control.

“The potential for a [inflation-induced] monetary policy error and elevated recession risks are providing support, ”said Citigroup analyst Aakash Doshi, who thinks the yellow metal could hit $ 1,950 over the next three months.

Others are more bullish. Goldman Sachs believes gold could top its August 2020 record of above $ 2,000.

The US bank said the relationship between gold and inflation-adjusted “real” interest rates was starting to weaken amid concerns about the economic outlook and rising prices.

Typically, real rates are negatively correlated with gold. This is because higher interest rates make non-interest bearing assets such as gold less attractive.

But that has not been the case this year. As real rates have increased, the gold price has remained resilient.

“As weaker US economic data starts to come through, we would expect gold [exchange traded funds] inflows to accelerate as investors partly shift out of equities into gold, ”said Goldman Sachs analyst Mikhail Sprogis.

There are signs this is already starting to happen. After falling in 2021, gold held by ETFs has increased by 57.3 tonnes already this year.

Goldman reckons that ETF inflows could total 600 tonnes this year, comparable to the average inflows in 2016, 2019 and 2000, when recession fears were at the front of investors’ minds.

Central banks’ interest in gold is also picking up. Turkey added 1.6 tonnes to its holdings last month, while Poland has said it could add 100 tonnes this year.

“There is an increasing sense that the Fed is significantly running behind the curve,” said Ross Norman, a gold market veteran who used to be a trader for Credit Suisse. “The concern is they might have to move quite aggressively and. . . therefore the chances of a policy error are getting increasingly large. ”