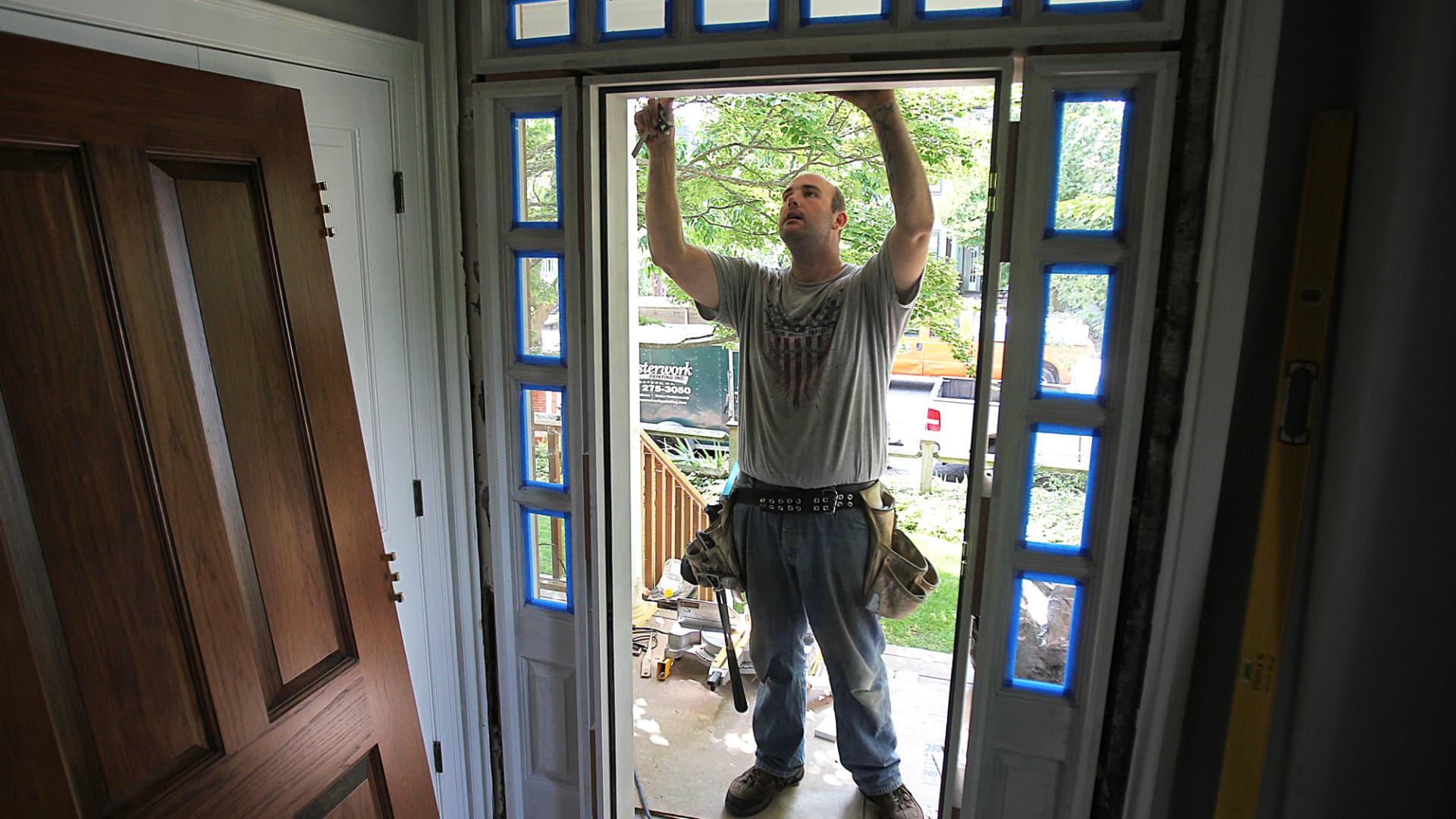 A home improvement contractor works on a house in Cambridge, Massachusetts.

As the US housing market falls hard from its pandemic-driven highs, home improvement retailers like Home Depot spirit Lowe’s don’t seem to be feeling the same pain. In fact, they’re doing better than expected.

While homebuilding and home remodeling are integrally connected, the market forces behind each can be different, and that’s what’s happening now.

Home Depot and Lowe’s reported strong quarterly earnings Tuesday and Wednesday, respectively. Lowe’s stock rose 3% Wednesday. Executives at both companies spoke bullishly about the prospects for their business in 2023. This comes as home sales, prices and construction are all weakening significantly due to a massive jump in mortgage rates. 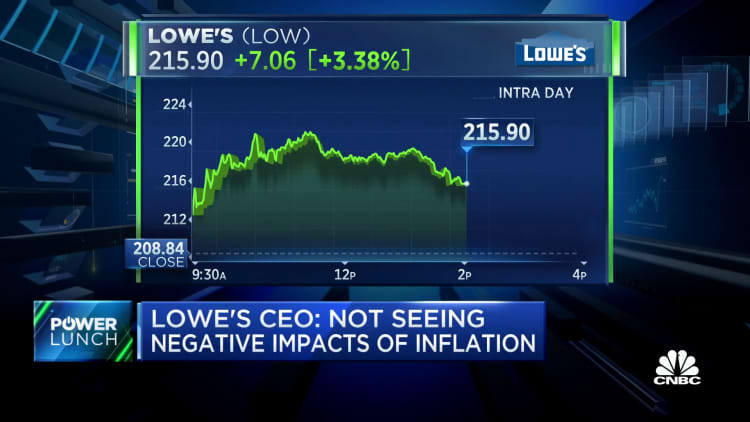 Home Depot financial chief Richard McPhail pointed to an “improve in place” mentality among current homeowners, who might have wanted to sell but changed their minds because they could no longer command top dollar.

“All we can do at this point is repeat what our customers are telling us,” McPhail said. “There is a dynamic we don’t see much in the market. With rising mortgage rates, homeowners are staying in place.”

With rising mortgage rates, homeowners are staying in place.

Home prices are still 11.4% higher in October than they were in October 2021, according to CoreLogic, but that annual comparison has been shrinking for several months. Prices are falling month-to-month at a much faster pace than normal seasonal trends.

Still, the unprecedented run-up in home prices during the first years of the pandemic, fueled by record low mortgage rates and a desire for many Americans to move to larger homes in suburban areas, gave homeowners sizeable amounts of equity. Prices jumped more than 40% in just two years.

By the end of the first quarter of this year, before the steep runup in mortgage rates caused the housing market to falter, homeowners had a collective $11 trillion dollars in so-called tappable equity, according to Black Knight. That is the amount a borrower can take out of their home while still leaving 20% ​​equity in it. That equity grew by an unprecedented $1.2 trillion in the first quarter of this year alone. Per homeowner, it amounts to roughly $207,000 in tappable equity.

That equity is part of a three-pronged driver of home improvement, according to the CEO of Lowe’s, Marvin Ellison. He pointed to home price appreciation, the age of the US housing stock — which is roughly 40 years old, the oldest since World War II — as well as high levels of personal disposable income.

“So when you look at all those factors, those things bode well for home improvement, and we feel really good about our current trends,” Ellison said in an interview Wednesday on CNBC’s “Squawk Box.”

Homebuilders, some of whom work in both home construction and home renovation, don’t feel quite so bullish on their market. Builder sentiment dropped in November for the eleventh straight month, hitting the lowest level in a decade, according to the National Association of Home Builders.

The NAHB, however, is forecasting that the remodeling sector will fare the best among the residential construction submarkets during this current housing contraction.

“The growth rate for improvement spending will slow due to declines for existing home sales,” said Robert Dietz, NAHB’s chief economist. “However, an aging housing stock, work from home trends and a decline for household mobility all favor remodeling spending.”

Dietz also points to the “interest rate lock-in effects,” meaning people don’t want to sell a home where they might be paying a 2.75% mortgage interest rate and trade up to another home where the rate would likely be around 7% today.

Harvard’s Joint Center for Housing predicts that the annual gains in home improvement and maintenance spending will decline “sharply” by the middle of next year, but only to a 6.5% growth rate from an unusually high 16% rate. 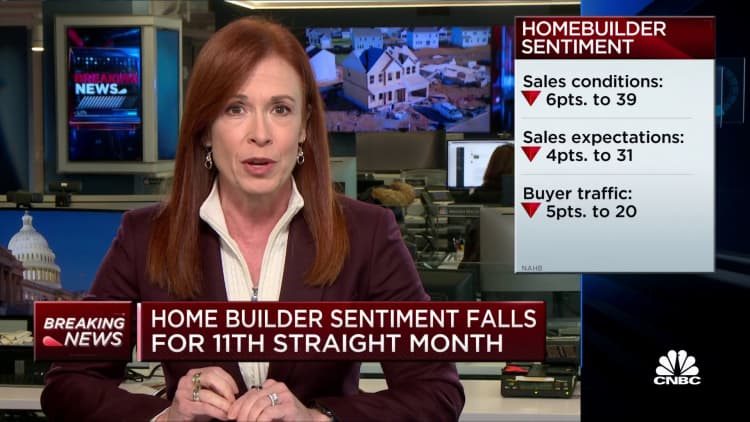 “Housing and remodeling markets are undoubtedly slowing from the exceptionally high and unsustainable growth rates that followed in the wake of the pandemic-induced recession,” says Carlos Martín, project director of the Remodeling Futures Program at the Center. “Spending for home improvements will continue to face headwinds from declining home sales, rising interest rates and the increasing costs of contractor labor and building materials.”

Despite inflation in just about everything in the economy, consumers do seem to want to spend more on their homes. Both Lowe’s and Home Depot showed a drop in the number of sales but a jump in the dollar amount of those sales. That led to their increases in revenue.

“There is inflation in the market and elasticity, but not to the degree that we anticipated, and the customer shows us they are resilient,” said Home Depot’s McPhail.

“Additionally, more than half of the homeowners we surveyed have no intention of selling or moving out of their current residences in the next 20 years or ever,” said Marine Sargsyan, Houzz staff economist.

Republicans take control of the House


Fans of author Joan Didion pay thousands for her sunglasses, photos, and writing desk in auction of her paraphernalia