How do I tell my daughter about the war? 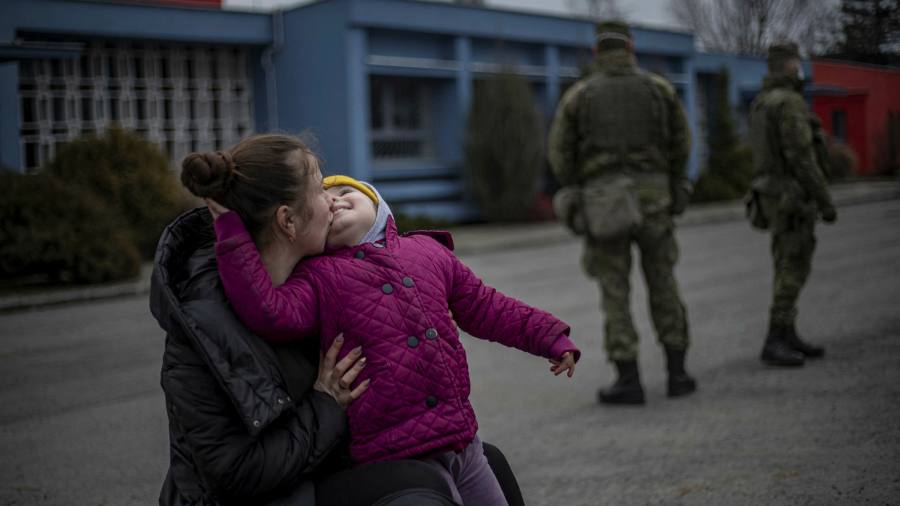 On the day the war began, I thought of my grandmother. She lives 120km from my native city of Lviv, and from my home in Brussels I wanted to make sure she was safe. I managed to get her a train ticket, and although it arrived five hours late, she got a seat and made it to Lviv comfortably.

My grandmother was born in 1940. Ever since I was young, I have wondered how people could even think of having children when the world is falling apart. Now I know.

My daughter, T, was born in 2013, shortly before the Maidan revolution. When she was still a baby, Russia annexed Crimea and turned the east of the country into a war zone. But we managed to have a great life in the part that was not affected.

Now she is eight and I need to wake her up for school. It’s February 25, the second day of full-scale war in Ukraine, but I still do not dare to tell my daughter what is going on. I ask the people around us to isolate her from this information. We moved away from Kyiv last September, so hiding reality is possible, unlike for the parents in Ukraine.

The fact that T is so attached to the country of her early childhood is proof to me that it was possible to create a miraculous comfort zone in Ukraine. I did not have this feeling as a child. Not because my parents and grandparents did not try hard enough – they did. But life in the Soviet Union had the feeling of a monotonous swamp where you need to look for small patches of solid land to shape the path for escape.

The threat of war was strong behind the Iron Curtain, and as a child I was always imagining which basement we would use as a shelter and which family members were going to be huddled there together. I was terrified by the idea that we would not be able to take everyone. When Ukraine became independent, I was happy to finally shed those fears.

Now, I promise myself not to cry or be frustrated in front of T. Imagining her former Kyiv classmates spending the night in the subway station hiding from bombings made me weep inside. So I overcompensate, trying to be three times more kind and two times more entertaining. And I stick to the rule of keeping away my phone or laptop when we talk or play. Yet my daughter is more nervous than usual. I convince her and myself that it’s because she’s tired. Half-term break starts on Saturday.

Read more personal accounts of the war in Ukraine:

Writer Oleksandr Softness on the language of war

Kyiv diary from journalist Kristina Berdynskykh, who asks: ‘Was I right not to leave?’

A few weeks earlier, after a weekend trip to Bruges, T had a nightmare: all of a sudden the war had started there, in Bruges, and we were captured by a military ship. The anxiety of war had been around for a while, so it was impossible for it not to get to her.

I did my best to calm her down, confident that a full-scale assault would not happen. In December, I had translated a long analytical piece from international researchers that sounded logical and reassuring. Now we know that logic and analysis do not apply to the Kremlin.

One disturbing effect of this cruel madness and invasion of an innocent and sovereign state is that an entire generation of children will have a clearly defined enemy, an irreversible consequence.

One of my colleagues, the Ukrainian writer Artem Chapeye, the most open-hearted and liberal man one could imagine, evacuated his family from Kyiv to his parents’ place in the Carpathians to become a soldier. In a post on Facebook he says that for his two sons the “Russians” will forever be the equivalent of “Fascists”. It makes him frustrated and at the same time awakens his martial spirit.

As I keep scrolling through Facebook, a “memory” from eight years ago pops up on the screen – a photo of boys playing with plastic machine guns on a cobble-stoned street in Lviv. Back then, I thought military toys were ugly; now I find myself calculating if they are grown-up enough to defend my home.

I never considered myself a patriot, nor a believer in any religion. I have a strong fear of death that dominates over many other priorities. A bit cynical. A bit snobbish. I would never have imagined I would feel pride for anything military. That I would regret leaving my country. That I would spend evenings cooking Ukrainian food for my daughter.

I am an escapist by nature. But how I admire the people who had the guts to build, invest, plan for the future in Ukraine. They were not looking for new patches to escape to – like me – they were looking for the stones to create a solid path for themselves and for others. I am so grateful to all those who, I know for sure, are ready to build smooth, wide roads joining us to Europe, so my daughter can return home the moment she wants.

Haska Shyyan is the author of the prizewinning novel ‘Behind Their Backs’, unpublished in English. Her work will be read aloud at the Writers for Ukraine benefit at the Lyric Theater, Belfast, on Sunday March 6


The importance of the lament