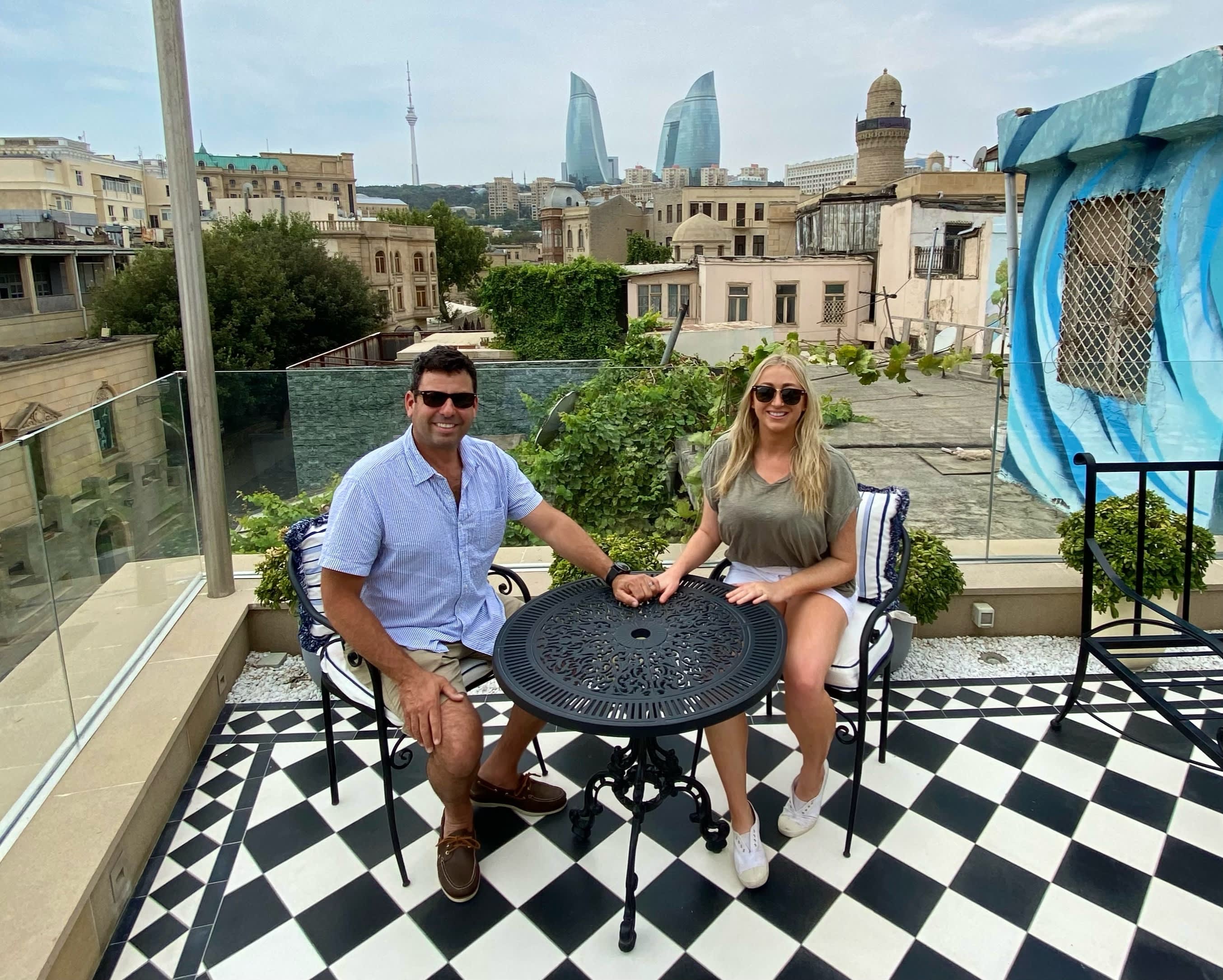 Justine Miller and Keith Feldman are on a mission to visit every country in the world.

Both work for local television news stations – Miller as a reporter, and Feldman as a photographer. For five months last year, the married couple lived at home in New York City. For the other seven months, they traveled, visiting 30 countries in 2021.

A job perk enables their voyages: Feldman can take lengthy sabbaticals from his job. Meanwhile, Miller works under a freelance contract, creating the perfect setup for a duo that prioritizes travel. Miller has visited 90 countries, inspired in part by growing up in a family with a passion for exploration, and Feldman has visited 55. They share those journeys with blog posts and videos on their website and social media accounts.

Last August, the couple spent 16 days in the Caucasus, splitting time between Georgia and Azerbaijan. They documented their trip for CNBC Make It, keeping close track of their budget throughout the two-plus weeks. Ultimately, they spent roughly $ 7,226 during their trip, keeping costs relatively low by “varying their experiences.”

“Sometimes, we’ll stay in a super luxurious place or we’ll do a very expensive activity,” Miller says. “Other times… we’ll have 50-cent street food. We’ll walk somewhere instead of taking a car. We’ll stay at a place that’s $ 7 a night sleeping outside.”

This particular trip likely would not be possible right now: The Caucasus, located between the Black Sea and the Caspian Sea, also includes Armenia and parts of southern Russia. The US government currently cautions against traveling to Georgia and Azerbaijan, citing high levels of Covid-19, the presence of Russian troops in parts of Georgia and “terrorism risks” in Azerbaijan.

Justine Miller and Keith Feldman sit in Baku, the capital of Azerbaijan.

“I feel like a lot of times when people travel, they might go to their hotel restaurant or they go to a place that’s only in a guidebook,” Miller says. “And not that those are bad experiences, but giving yourself the freedom to just stop and see something random… is what’s so great.”

Here’s how the couple spent their money exploring the Caucasus seven months ago:

Miller and Feldman booked their flights about a week out from their departure date, using points from a Chase Sapphire Reserve credit card because international plane tickets rarely go on sale. They cashed in 195,600 miles, ultimately paying $ 110 out of pocket for two business-class tickets on a Lufthansa flight from New York City to Baku, Azerbaijan.

“We charge everything we can on the credit card, and sometimes we get double points, triple points, five or 10 times the points,” Feldman says. “Those points enable us to really maximize our travel experience.”

Once in Baku, the couple spent $ 15 total on train tickets to get to the countryside. They spent lots of their trip walking or using Bolt, an e-scooter app. They also rented one car in each country, costing them a total of roughly $ 578.

“When we see something, we pull over and get to experience it,” Feldman says. “Whether it’s a roadside corn stand, or, you know, seeing a herd of sheep or cows crossing the road.”

From Azerbaijan, the couple hopped on a plane to get Tbilisi, Georgia, costing them less than $ 200. Their most expensive flight was returning home: Two tickets from Tbilisi to New York City cost them a total of $ 3,097.

Miller and Feldman, standing in Baku, Azerbaijan, spend seven months of the year traveling. Their goal is to visit every country on Earth.

The couple booked five different places to stay Azerbaijan. Miller’s favorite was a $ 30 one-night stay at the historic Sheki Karvansaray Hotel in Baku.

“It was built in the 1600s, and silk road traders going between Europe and Asia would actually come and sleep in [those] exact rooms, “Miller, a self-professed history buff, says.

Generally speaking, Miller and Feldman say, they like to avoid tourist traps – preferring instead of learning what “real life is like” in a given region. For this trip, they spent about $ 16 each to stay with a local family for one night in the countryside near Ganja, Azerbaijan. They found the homestay opportunity on booking.com.

One of their splurge moments involved the Stamba Hotel in Tbilisi, one of eight different places they stayed in Georgia. The luxury hotel, a former Soviet printing press, was their most expensive piece of lodging, costing them roughly $ 1,050 for three nights.

“It [had] amazing service, beautiful design [and was] really comfortable and clean, “Miller says.” It was fun to stay in such a fancy place [and] get dressed up. “

In Naftalan, Azerbaijan, the couple experienced one of the region’s most noteworthy resources by way of a crude oil bath at the Gashalti Health Hotel. The bath, food and one night’s stay at the hotel totaled $ 100.

Azerbaijan also has more mud volcanoes than anywhere else in the world. The couple took a dip in one for approximately $ 15 each. “It was this crazy feeling where you literally feel like you’re suspended in the mud,” Miller says. “It’s like an anti-gravity chair.”

Along the way, Miller and Feldman picked up souvenirs and stopped at photobooths – but mostly prioritized spending on food and wine.

Most of the couple’s meals cost less than $ 40. The notable exception involved $ 217 caviar that they ordered for their anniversary.

“One of my favorite meals in Azerbaijan … was just pulling over on the side of the road at these little kabab stands,” Miller says. Each kebab only costs a dollar, Feldman noted.

In Georgia, the couple ate several regional specialties, including khinkali – a type of soup dumpling that ran for only 35 cents apiece. “We found this one place where you sit in a back garden patio, woodsy location and they just brought plates and plates of these dumplings,” Miller says.

In her pre-trip research, Miller also discovered Kakheti, known as Georgia’s wine region, which has been growing grapes for approximately 8,000 years. For two nights, the couple stayed at a “beautiful wine [estates]”surrounded by vineyards. Their most expensive wine tour included lunch, and cost less than $ 50.

Budget estimates for Miller and Feldman’s trip were calculated based on August 2021 conversion rates between the US dollar and local currencies in Azerbaijan and Georgia.