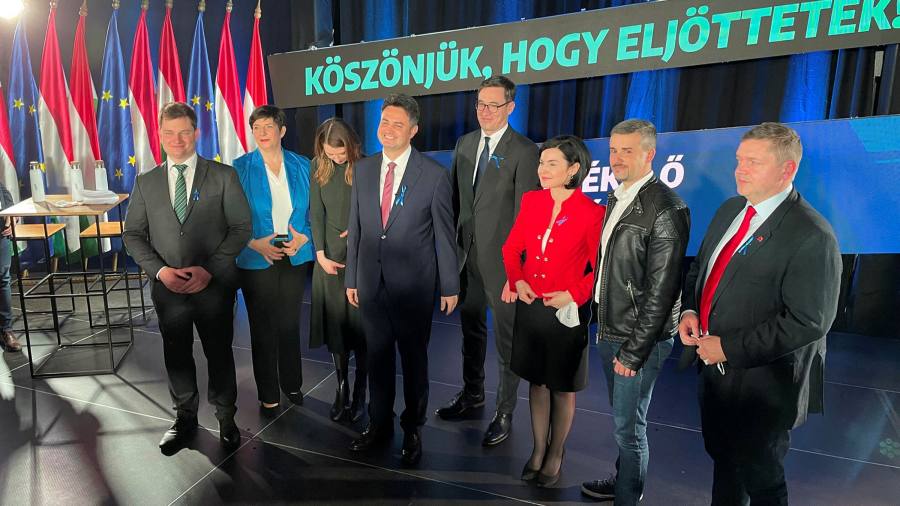 In a converted loft in Budapest a disparate group of six party leaders gathered last week to rally around the opposition’s joint candidate Peter Marki-Zay as he outlined the coalition’s strategy to unseat Hungary’s strongman leader Viktor Orban.

Calling Orban’s government “the most corrupt Hungarian regime in the past thousand years”, Marki-Zay railed against Orban for undermining democracy and failing to reform healthcare and education, and attacked him for Budapest’s mishandling of the coronavirus pandemic.

The event was intended to show a united front after months spent bickering over campaign details, policy and candidates since Marki-Zay, a small-town mayor widely considered a long shot, secured the opposition candidacy in an unprecedented primary election in October.

In coalescing around a single candidate for the premiership, the opposition hoped to give itself the best chance yet of ousting Orban at the ballot box. But with six weeks to the poll, confidence is fading. Even optimistic insiders only put the coalition’s chances of victory at 40 per cent on April 3.

Political leaders and analysts say the disjointed United for Hungary campaign will struggle to beat the ruling Fidesz party’s political machine, with polls putting Orban on course to continue his premiership until 2026.

In his speech, Marki-Zay acknowledged the difficulties of spearheading a broad coalition where the once far-right Jobbik rubs up against socialists and greens.

“We have weathered difficult times, sometimes full of argument, when values ​​and interests clashed,” he said. “[But] we have more power and more of a chance to win this election than any time before. ”

However, as he spoke there was still no agreement on a common election program, nor a final list of candidates.

“This has been crazy difficult,” said Budapest mayor Gergely Karacsony, who leads one of the green parties in the coalition, after the Marki-Zay speech. “It’s picking up now but in the beginning it felt like only we supported this effort.”

The two largest opposition parties – the center-left Democratic Coalition (DK) and Jobbik – were the most reluctant participants after the shock of seeing their candidates lose to Marki-Zay in the primaries, according to four campaign sources.

“We need to win arguments with DK and Jobbik or compromise with them on everything. But that is OK. That’s how we will have to govern, too, ”said Peter Zarand, who manages Marki-Zay’s and the coalition’s national campaign.

Jobbik torpedoed the coalition’s joint candidate for president this month, sparking a damaging public spat, even though the presidency is a largely ceremonial role and Fidesz will easily carry a vote in the Orban-dominated parliament on March 10.

Marki-Zay has also made life difficult for the coalition, surprising his partners when he insisted that his small party should appear on the ballot papers despite skipping the primaries as a group. Again, his coalition partners resisted because this would have given Marki-Zay extra influence.

And the parties have argued for weeks over the distribution of each party’s candidates on national voting lists, with the allocation of parties to one seat still unresolved, several aides said.

The bickering contrasts with years of organizational efficiency and consistent messaging from Orban’s Fidesz party. “It is conspicuous because Orban has stifled public debate on public matters for so long,” Zarand added.

A win for Fidesz even by a small margin would give Orban a comfortable cushion in the 199-member parliament because of distortions in Hungary’s election system. About a quarter of voters are still undecided.

Fidesz also benefits from lightly enforced boundaries between party and government campaigns, and lax rules on private groups campaigning on behalf of a party.

It only began its own formal campaign last week, but the government, municipalities, political action committees and communication companies have already spent big to promote Orban’s campaign.

According to the website 444.hu, pro-government spending online is roughly double the opposition’s spending, at around € 7.5mn. Fidesz advertisements also vastly outnumber those from the opposition on billboard spots around the country.

Orban created a vast media machine, including a loyal group of hundreds of media outlets, a lavishly funded public broadcaster and news agency, which flooded the market with free content that toes the government line.

In such a hostile environment, campaign leaders said the opposition coalition will combat spending with traditional door-to-door campaigning across the country. DK and Jobbik leaders both said voter pressure has persuaded them to commit to abandoning their differences in the pursuit of a singular goal: unseating Orban.

“We managed [last autumn’s] primaries running on fumes, deploying and co-ordinating thousands of volunteers, ”Klara Dobrev, who was the DK’s candidate in last year’s primaries, told the FT. “We will build on that base to make sure all six parties support each candidate. . . Voters forced us to join and will force us to govern together. ”

Jobbik chair Peter Jakab said the earlier disagreements, such as quarrels over lists of candidates, would not undermine the campaign.

“Voters could not care less about the lists,” he said as he left the loft to get back on the campaign trail. “They care about the future of the country, which is down to getting out the opposition vote for April 3.”