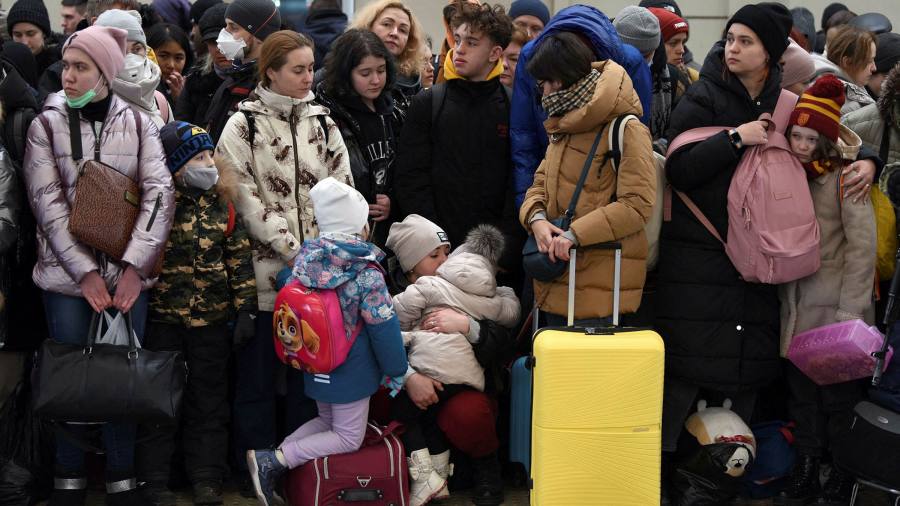 Yana Shevchenko is freezing, her phone is dying and she doubts she has the strength to push her way on to the next train out of Lviv. But nothing will deter her from her dash for Poland – and safety.

“I just want to get out of here,” the computer programmer from the city of Kharkiv said. “And away from this bloody war.”

It might sound like a simple aspiration, but thousands of others have the same idea. Lviv railway station swarms with people displaced by Russia’s offensive against Ukraine, many desperate to make the 100km journey to the Polish town of Przemysl and escape the war.

Lviv, Ukraine’s westernmost city, has become the destination of choice for people fleeing the Russian invasion that has targeted some of Ukraine’s biggest population centers. Many come from the capital Kyiv, which has been subject to a barrage of artillery and long-range missile strikes, some of them hitting residential areas.

The displaced are, in many cases, opting to sit out the fighting in Lviv, a relatively safe haven, while others are using it as a landing stage for destinations further west, beyond Ukraine’s borders.

The historic city, which used to be part of the Austro-Hungarian empire and survived second world war occupation by Germany largely unscathed, is bursting at the seams.

Some think it could become Ukraine’s alternative capital if Kyiv falls. The UK embassy has moved there, though other countries, such as the US and Israel, have already switched their diplomatic presence from Lviv to Poland.

The city’s history as a cradle of Ukrainian nationalism would make it an ideal candidate. “Lviv is the least Sovietized and least Russified city in Ukraine,” said Yaroslav Hrytsak, professor of history at the Ukrainian Catholic University in Lviv. “It has the atmosphere of a European city.”

Yet some fear its relative calm could end at any time, and with it its role as a conduit to safety. “We are preparing for the worst-case scenario – columns of Russian forces moving on Lviv,” said Serhiy Kiral, its deputy mayor.

Already, he said, Lviv was awash with rumors about Russian spies and saboteurs painting suspicious marks on buildings that could direct artillery fire at them, or act as guides during aerial attacks.

Many of Lviv’s residents seem braced for catastrophe. Long queues have formed next to cash dispensers, some of which have run out of money.

Food shops have emptied out, hotels closed down and new arrivals hunt vainly for places to stay. The city’s roads are snarled up with cars, buses and transit vans shuttling people west.

Some are going in the opposite direction, among them Slavik Korshunov, a Ukrainian living in Warsaw who said he had come home to fight. His plan was to report to his local army recruitment office on Monday. “No one else is going to help us,” he explained. “We’ve been left on our own.”

Kiral, the deputy mayor, said long queues of would-be recruits had formed outside the offices of Lviv’s territorial defense units.

Even non-combatants are fired up. Larisa Lesnichenko, a music teacher, said she planned to travel back to her hometown of Kryvyi Rih, in central Ukraine, having been on a brief holiday near Lviv. “I was born in this country and I’ll stay here,” she said. “If I have to, I’ll tear [the Russians] apart with my own teeth. ”

Traveling with her is Alexander Fomin, a retired miner. “The Russians thought we’d welcome them with flowers,” he said. “Instead they got funeral wreaths.”

In Lviv city hall, volunteers manned telephone hotlines for displaced people from across Ukraine asking where the border crossing into Poland is and how to get there. The council has set up reception centers in 260 locations in and around Lviv, some of them in schools and gyms.

Oleh Malets, who runs the co-ordination center for displaced people, said all of them would be full in a matter of days. “Some 885 people have arrived in the last two days alone,” he said. “And more trains and buses are arriving every hour.”

Already, according to the UN refugee agency, almost 120,00 people have fled Ukraine into Poland and other neighboring countries since the Russian invasion started.

At Lviv railway station, Yana Shevchenko keeps an eye out for her train as she is jostled by dozens of other would-be passengers.

“I saw things like this in movies but I never thought it would happen to me,” she said. “I just want to be safe.”