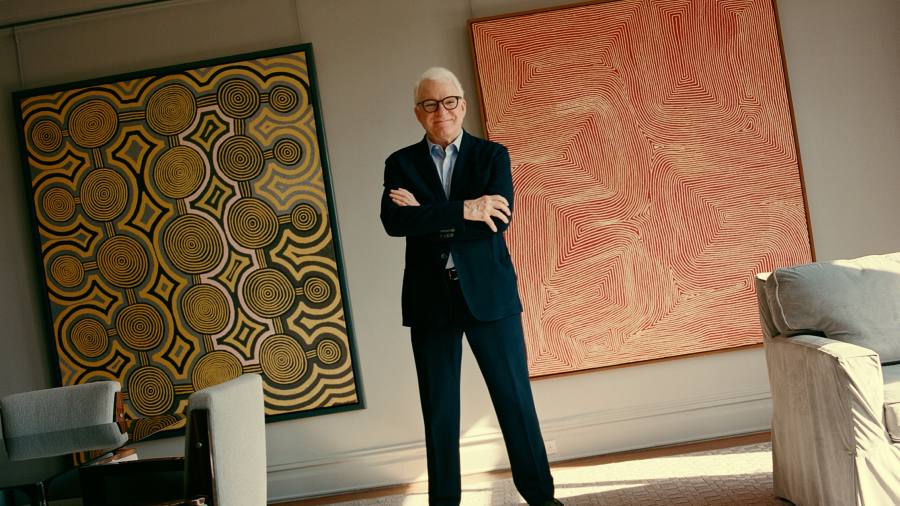 Steve Martin was astonished the first time he walked into a room full of Australian Aboriginal art. “It was something I had never seen before,” says the actor and writer. “And I’ve been collecting art for 50 years.”

The line-based works, by Warlimpirrnga Tjapaltjarri, a painter from Australia’s desert interior, were rendered in rich yellows and ochres. The canvases seemed to undulate. Enchanted, Martin left the Lower East Side gallery with a painting. He took it back to the apartment on Central Park West that he shares with his wife, Anne Stringfield, and set about finding a place for it among their Morandis and Hockneys. “I’ve been hooked ever since,” he says six years later.

Martin’s self-described naïve appreciation of the earthy tones, intricate dotting and flowing lines of Aboriginal desert painting soon became something more: “I started ordering books, and I realised how complex the work was.” He read about Country, an ancient philosophy in which the ecosystem, human inhabitants and past, present and future of a place are inextricable; and he learned that Country has helped inspire many contemporary Australian Aboriginal artists to create. These painters, he realised, were drafting nothing less than blueprints for existence. The results were beautiful.

“These pictures could hang next to any works of the same period and hold their own,” Martin says now. “I daydream about seeing them mixed in with paintings by Agnes Martin and Jackson Pollock.”

Martin may not need to daydream for much longer. The contemporary art world is catching up fast to Aboriginal art, and some of its biggest names are deepening their engagement with it in 2022. Earlier this month, Gagosian opened a solo exhibition of works by the late Emily Kame Kngwarreye at one of its Paris galleries – Emily: Desert Painter of Australia runs until 12 March. In May, Sotheby’s New York will host a dedicated Aboriginal art auction following its Evening Sales for contemporary and modern art.

Major museum shows have begun to proliferate, starting with the Tate Modern’s A Year in Art: Australia 1992, which has proven so popular since it opened last June that its run has been extended for another six months. Ever Present: First Peoples Art of Australia will open at the National Gallery Singapore in May, showcasing 150 works from the collections of the National Gallery of Australia (NGA) and Wesfarmers Arts. And, back in New York, the Metropolitan Museum of Art is finalising plans for new galleries with a space dedicated to contemporary Australian Aboriginal work.

“It’s a hugely exciting moment,” says Hetti Perkins, curator of another big show, the NGA’s fourth National Indigenous Art Triennial, which opens on 26 March in Canberra. “And it’s timely. This is art from the oldest surviving culture in the world, made by a population that has lived sustainably for millennia. These artists can show us the way forward.”

Painting was a means of preserving their understanding of Country

There have been flurries of excitement about Australian Aboriginal art before, but this is the first time that commercial and institutional heavy hitters have moved in tandem. Chief among them is gallerist Larry Gagosian, an old friend of Martin’s. In 2019, Martin staged a private exhibition of Aboriginal art from his collection for his friends in New York. The next day, over lunch, Gagosian suggested they do a “proper” show together. That exhibition, Desert Painters, was met with such enthusiasm that the gallery quickly mounted a second one in Los Angeles and a third in Hong Kong.

Then, in December 2019, Sotheby’s held its first dedicated Australian Aboriginal art auction in New York, netting $2.8m from 29 lots, including $596,000 for a painting by market leader Kngwarreye. A few months later, just before the pandemic took hold, Australian fine art dealer D’Lan Davidson arrived in New York and mounted a sale of work by her and other desert painters that achieved more than $3m. “New York eclipsed our expectations, not only in sales results, but also in terms of the sophisticated way the audience engaged with the work,” says Davidson, who has become Martin’s primary Aboriginal art adviser.

At all three events, the artist who achieved the strongest results was Kngwarreye (Ung-wah-ray). Her story is enthralling: she lived in a remote desert area known as Utopia; began painting on canvas in 1988, when she was about 80 years old; and produced more than 3,000 works in a dizzying array of styles before her death in 1996.

Kngwarreye electrified the Australian art scene during the 1990s and her paintings, known as “Emilys”, soon became hot commodities. “It was certainly on the strength of her work that she became such a high-profile artist, but it was also the fact that she was so outside of that contemporary art world,” says Perkins. “I think people were intrigued by the fact that this very elderly woman, living in a very remote community, was responsible for this extraordinary vision. It was almost mythic.”

Kngwarreye’s exuberant dot paintings, kinetic line-based work and mastery of colour fundamentally changed the way contemporary art lovers in Australia and beyond engaged with Aboriginal art. Comparisons with abstract expressionists abounded. But Kngwarreye had not studied 20th-century movements. Rather, her alternately sensuous and muscular mark-making sprung from her deep knowledge of Country and from the ceremonial body painting of Utopia.

The $596,000 Sotheby’s result was far from a high-water mark for Kngwarreye: two years earlier, in Sydney, her painting Earth’s Creation I fetched $1.6m at auction. Davidson describes her as a force of nature in the market. “Emily is head and shoulders above any of her peers,” he says. “She’s going to break into the mainstream contemporary art world, and that’s a matter of time.”

It’s an exciting moment. These artists can show us the way forward”

Kngwarreye is not the only Aboriginal artist to have begun practising in old age: many others, past and present, wait until their understanding of Country is fully formed before attempting to create work. But lively younger artists are also increasingly commanding the spotlight. The majority of young Australian Aboriginal people now live in cities, away from their ancestral homes, and these urban artists are creating work that contends with feelings of dislocation and with Australia’s violent colonial past. And younger practitioners from remote communities are gaining prominence, too. Beyoncé caused a stir last year when she Instagrammed a photo of herself in front of a work by desert artist Yukultji Napangati (the artwork in question was a gift from Jay-Z).

Then there’s Daniel Walbidi (Wal-biddi), a thirtysomething who lives by the ocean in Australia’s tropical north-west and paints intensely saturated visions of Country in yellow, red and metallic tones. He works slowly, and demand for his paintings far outstrips supply. Some of Australia’s top curators grumble privately about not being able to acquire Walbidis for their institutions. “He’s a visionary,” says Nick Mitzevich, director of the NGA.

Walbidi’s homeland is actually a desert region hundreds of miles from the coast, but a widespread drought in the 1950s forced his clan group to relocate. He began painting in high school and soon decided that he wanted to depict his people’s place of origin. He sat down with community elders and asked to hear their stories. “When I did that, a new world was revealed to me,” Walbidi says. “I had a revelation of knowledge, and my connection to Country was manifested.”

In the years that followed, Walbidi encouraged the elders around him to begin painting as a means of preserving their understanding of Country. Several, such as Weaver Jack and Jan Billycan, have become successful artists in their own right. “People of that age see the world differently, and Country differently,” Walbidi says. “Old people keep the knowledge and maintain authority. Without elders, you don’t know anything, really.”

Walbidi is building a profile in America: he featured in the Sotheby’s 2019 auction and his Australian representatives at Short Street Gallery have booked him a US show later this year after fielding numerous enquiries. He doesn’t seem to mind the attention, but says he has no plans to leave north-west Australia. His practice is fed by daily life with his people. “I’m living and breathing it,” he says.

If Kngwarreye is the A-lister and Walbidi is the rising star, then Angelina Pwerle (Pull-uh) is the cult favourite – one on whom a growing number of institutions and collectors are quietly placing bets. Thought to be about 75 years old (there is no paper record of her birth), she has been developing her assured and remarkably detailed style of dot-work since the 1990s. Her paintings, which conjure images of distant galaxies, cloud formations and geological phenomena, practically hum with energy.

“The way her practice has developed is extraordinary,” says Mitzevich. “She has refined the Central Desert dotting technique and used it to create abstract visions that are quite distinct from those made by her contemporaries.”

Those visions are inspired by Utopia, where Pwerle has spent her entire life, and by the native bush plum, a spiritually significant fruit that grows in abundance there. San Francisco gallerist Todd Hosfelt vividly recalls visiting the office of billionaire Kerry Stokes in Perth and seeing the Bush Plum works for the first time. “They made the hair on the back of my neck stand up,” he says.

Pwerle’s work was featured last month in Salon 94’s group show at Art Basel Miami; it will be part of the Met’s touring exhibition The Shape of Time: Art and Ancestors of Oceania, which will travel to two international venues in 2023. For now, she is something of an insider’s secret whose work is tightly held. “Although her paintings are part of major private collections, the significant works have rarely shown in the secondary market to date,” notes Davidson. But that could easily soon change. “From a [broader] market perspective, we’re at the very beginning stages, and I could not feel more excited,” he adds. “It hasn’t even started yet.” 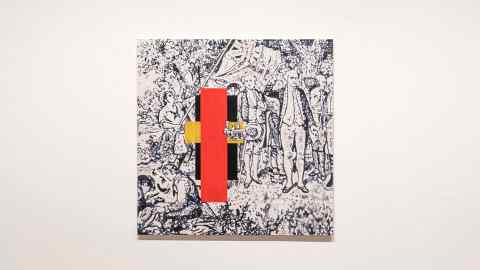 Steve Martin agrees. “So much contemporary art is for billionaires,” he admits. “For Anne and I, it’s almost unmanageable: you buy one picture and you’ve spent your 10-year budget. But here is this fantastic trove of beautiful work that we really love. It’s not just standard gallery fare. And it’s still relatively attainable.” It’s also another welcome example of the market rectifying past omissions, he says. “A lot of black artists in America who were overlooked have become very collectable. And this should too. This deserves to be.”

Pwerle herself remains happily apart from the growing buzz. She speaks only her native Anmatyerre and rarely leaves the Utopia region. Like Kngwarreye and Walbidi, she paints to articulate the profundity of the life system that she is part of, and to ensure its survival. “This is a constant engagement,” she says, through a translator. “This is a spiritual connection to place.” Asked to explain her work, she says, simply: “My Bush Plum paintings represent the whole thing: all of Country.”

Banks betting on Russia face a new test of their appetite