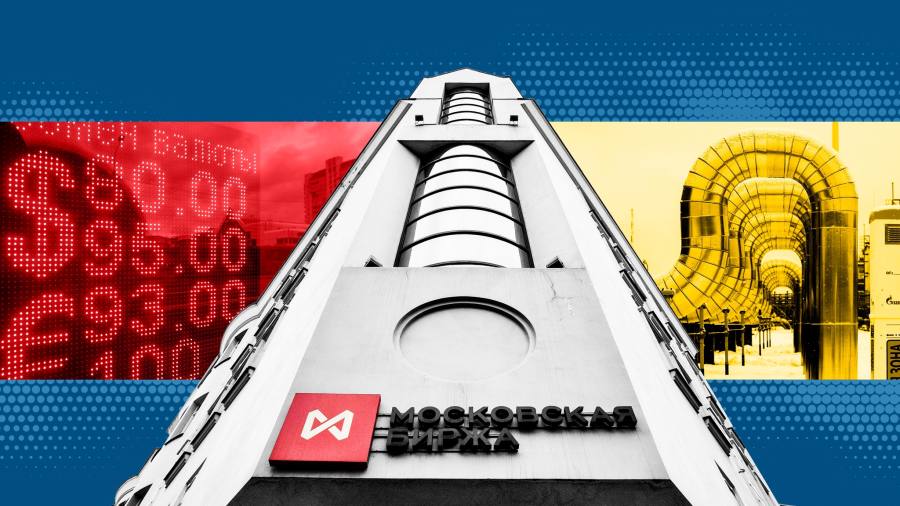 The eruption of the biggest military conflict in Europe since the second world was caught many investors by surprise.

Moscow’s stock market was hit by one of the biggest collapses in financial history this week after Vladimir Putin launched an invasion of Ukraine. The dollar-based RTS index shed 38 per cent on Thursday, while Russian bonds tumbled and the ruble plunged to a record low against the dollar.

The ferocity of those declines underscored how even many savvy, well-connected Russian investors – who dominate activity on domestic markets – were shocked by Moscow’s incursion of its neighboring country.

“It looks like Putin’s greatest ever misjudgment,” said Charlie Robertson, chief economist at Renaissance Capital. “His assessment appears to be that people will continue to buy Russian gas, wheat and metals, so what if they do not buy any Russian stocks and bonds?”

Russian financial markets partially recovered during Friday’s session, with the RTS adding more than a quarter as traders assessed a wave of sanctions imposed by western powers that spared the country’s energy sector on which other parts of Europe are strongly dependent.

Yet the broader financial shockwaves will be difficult for investors everywhere to navigate, given the complex interplay between the impact on stocks, the financial sanctions that will be slapped on Russia, rocketing commodity prices, the drag on global economic growth from heightened geopolitical uncertainty, and any response that central banks may take.

“Investors are on the back foot,” said Dominic Armstrong, chief executive of Horace Advisory, “No one expected to see cruise missiles fired into Europe in 2022 in a hostile attack.”

The reaction of global stock markets reflected the challenging cross-currents that investors must now navigate, as they weigh how the war in Ukraine could influence central banks’ decisions to withdraw pandemic-era stimulus. Persistently high rates of inflation had already prompted traders to price in multiple interest rate rises this year in Europe and the US.

Any toughening of western sanctions against Russia could pose the risk of disrupting commodity supply chains, stoking inflationary pressures even further and lessening the appeal of speculative and high-growth equities.

The FTSE All-World index dipped has already fallen around 7 per cent this year, with falls this week fueled by the Russia crisis adding to the decline.

Some international money managers will be dealt an even harder blow by direct exposure to Russian securities, whether listed in Moscow or on global exchanges. Financial sanctions could ultimately turn these into uninvestable assets for most mainstream financial institutions.

Russia is not nearly as big a component of emerging markets as it once was, given the shift towards Asia over the past decade. But for some investment funds it remains a popular bet, thanks to the growth of an affluent middle class, solid state finances and cheap valuations. More recently, Russian assets have also been a popular way of hedging against inflationary pressures, thanks to the uplift from rising commodity prices.

“Investors are shocked, they did not see this coming,” Robertson said. “This has been as bad as it could possibly be.”

The biggest western holders of Russian sovereign debt are funds controlled by German insurer Allianz, the New York investment firm BlackRock, Californian money management groups Capital and Western Asset Management and Vanguard, according to fund filings compiled by Bloomberg. Together these five investors own about $ 7.4bn of Russian bonds.

Many equity funds – especially those that specialize in developing economies – also have exposure to Russia. For example, the MFS Emerging Markets Fund had 7.9 per cent of its $ 7.8bn assets invested in Russia at the end of last year while GMO’s $ 2.2bn emerging market fund had a 14.9 per cent allocation to Russian equities at the end of January.

Calpers, one of the world’s largest public pension plans, has around $ 900mn exposure to Russia, after increasing its emerging market allocation last November to boost chances of reaching its return targets.

The Invesco Oppenheimer Developing Markets Fund managed by Justin Leverenz – one of the largest dedicated EM funds with over $ 43bn of assets – had 9 per cent of its money in Russian securities at the end of 2021. Last month Leverenz dismissed the danger of “devastating Sanctions, arguing at the time that Russian stocks were a “cheap, symmetric bet”.

“Talks of ‘devastating’ further sanctions seem largely fictional given the painful self-inflicted repercussions this would have on the global economy, and in particular Western Europe,” he told the Financial Times in late January. Leverenz did not respond to requests for an updated comment.

Analysts stressed that aside from Russia’s significant role as an energy exporter, the country’s direct financial linkages to the outside world were modest, which would limit both the short and longer term impact. JPMorgan estimates that the total exposure of foreign banks to Russian banks, companies and the state only amounted to about $ 89bn.

Nonetheless, a sense of confusion, uncertainty and even fear was the overriding message from the finance industry this week, after Europe was once again plunged into armed conflict.

“Today we woke up to a world that was different than yesterday,” Ingvild Borgen Gjerde, an analyst at DNB wrote to the Norwegian bank’s clients on Thursday.