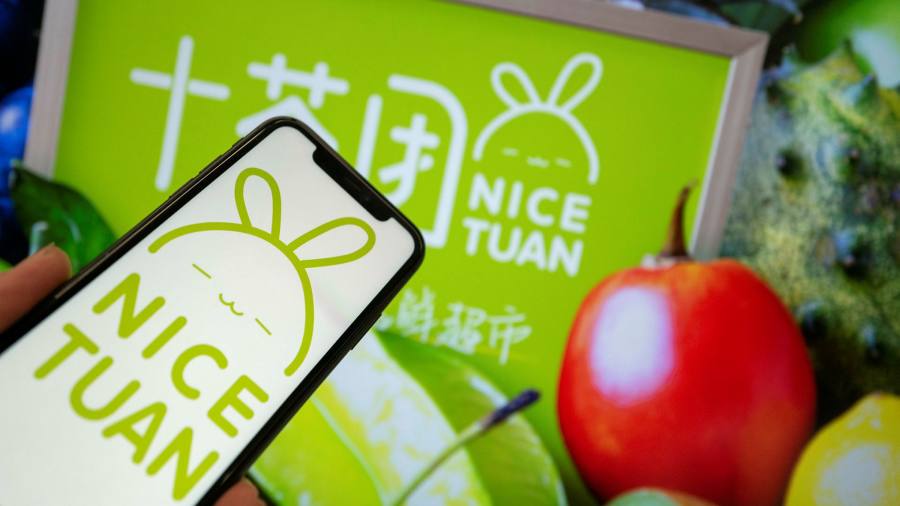 Unpaid suppliers are picketing, founders are fleeing and thousands of white-collar tech workers are being laid off as investors grow wary of China’s unprofitable consumer internet start-ups.

On a cloudy January afternoon, a honking procession of suppliers working for grocery company Nice Tuan staged a drive-in protest at an Alibaba warehouse in the central Chinese city of Changsha to demand the ecommerce giant bail out the company.

“We can not get our money, no one at Nice Tuan is dealing with us. We’re out of options, so we’re chasing Alibaba, ”said sunflower seed supplier Yang Xianli.

Nice Tuan, a Chinese online grocery start-up that has raised more than $ 1.2bn from investors including Alibaba, DST Global and DE Shaw, is the latest company teetering on the brink of collapse as a radical shift in Beijing’s policy prompts investors to abandon consumer internet companies in favor of “hard tech” ventures.

Chinese start-ups pulled in a record funding haul last year, up a third from the prior year, according to data provider ITjuzi. But there is a growing bifurcation in China’s venture space.

Funding for ecommerce, education technology and social start-ups was flat or down, while investments in semiconductors, robotics and other hard tech companies jumped.

Huang He of Northern Light Venture Capital, a leading Chinese investment firm, said competition for deals and valuations in the robotics field has never been so fierce.

“The nation wants more focus on hard tech and industry. Investors must go in the direction of the country, ”he said. Northern Light’s consumer internet team has pivoted to backing direct-to-consumer and retail ventures, he added.

SoftBank chair Masayoshi Son also said that the Japanese group was shifting its direction in China. “We’re not investing so much in consumer or media data-sensitive companies at the moment,” he said on a November earnings call.

Son said there are “many companies that the Chinese government is not showing red flags for” such as “robotics, medical and B2B”.

The strategic change gained momentum in July, when Chinese authorities launched a probe into ride-hailing giant Didi Chuxing after its New York initial public offering. Weeks later, Beijing announced rules that upended the edtech sector. Officials have since added regulations that make it more difficult for Chinese companies to list in New York.

“Consumer internet looks to the US as the prime exit venue. That is questionable now, especially for large platforms, ”said an investor at a multibillion-dollar China-focused fund that has been curbing funding in space.

“Large strategies like Alibaba, Tencent or [private equity] funds usually lead the big growth rounds before IPO, but they are stepping back, ”the investor added.

The impact of Beijing’s regulatory campaign on consumer internet companies has been severe. China’s online education leader New Oriental laid off 60,000 employees. Rivals such as Gaotu Techedu, TAL Education Group, Yuanfudao and Zuoyebang have collectively let go of tens of thousands of workers.

The regulatory scrutiny intensified the pressure on companies struggling to become profitable. “Our positioning was not clear, there was no distinct direction. . . it was completely throwing money into the water, ”said one former Chengxin employee. “[Didi] could not bear the huge losses any longer. ”

After plowing $ 3.8bn into the company alongside SoftBank and other investors in the first half of 2021, Didi was months later forced to write down most of its investment.

Nice Tuan faces a similar fate after burning through $ 750m raised from investors including Alibaba and Yuri Milner’s DST Global in March last year. It has been unable to rope in additional investors, leaving its suppliers grasping for repayment. Nice Tuan has laid off thousands of employees in recent months. One former worker in its strategy department told the FT he was still owed pay for his final two months of work after being laid off at the end of December.

One week later, Nice Tuan’s unpaid bills led a Beijing court to hit Wang Wenjing with personal spending restrictions, the first in a cascading number of court orders prohibiting him from going on holiday, golfing or staying in nice hotels.

A spokesperson for Nice Tuan, who the FT found in an empty Beijing office, said the company still had “money in our bank account” and that it was only “lengthening our payment cycle”.

The spokesperson said some employees were in arbitration over their exit, confirming that the company had laid off more than 1,000 staff at its headquarters. She called the legal representative changes “normal”.

“New government policies have caused the whole industry to retrench. . . it’s the same for a lot of the internet industry, the government does not want us to be polluted by capital, ”the Nice Tuan spokesperson said.

“There’s been a reshuffling of the education industry, the reshuffling of our industry is the same, after this, there may be a period of healthy growth.”

“With only a primary school education I know debt has to be repaid, even if your business can not go on, you have to give creditors an accounting for, an explanation,” he said. “How does Nice Tuan’s boss, a Harvard graduate, not get this?”