Investors bet on interest rate cuts in 2023 despite Fed signals 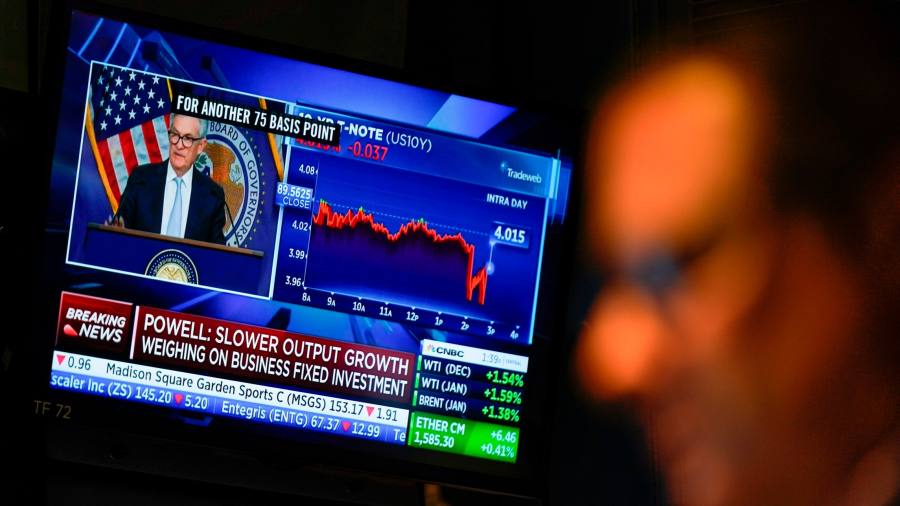 Investors predict the Federal Reserve will cut rates when faced with a slowing economy next year, betting the US central bank is far closer to ending its historic monetary tightening campaign than it has signalled.

Traders in the US government bond market are wagering that the Fed will be forced to cut interest rates twice in the fourth quarter of 2023. This is despite protests from chair Jay Powell and other top officials this week that the central bank will not reverse course on its plans to keep borrowing costs elevated even as it slows the pace of its interest rate increases.

Treasuries futures markets point to the Fed’s benchmark policy rate peaking in May at 4.9 per cent before falling back to 4.4 per cent by the end of 2023. That implies roughly 0.5 percentage points of cuts.

Bets on interest rate cuts next year accelerated after Powell on Wednesday laid the groundwork for the Fed to end its string of 0.75 percentage point interest rate increases and downshift to a half-point rate rise at its meeting in December. Investors also looked past a stronger-than-expected November jobs report, released on Friday, which suggested little reprieve in inflation.

“I think it’s safe to say the committee is not expecting to cut rates next year. So how do we explain the difference between that outlook and what we’re expecting?” said Matt Raskin, head of US rates research at Deutsche Bank, which has forecast that the Fed will be forced to cut interest rates by 0.5 percentage points in December 2023.

“I think it boils down to market participants expecting a recession next year while the committee still has a soft landing in their forecasts.”

Raskin cited the inversion of the yield curve — a widely used predictor of recession — among other signals.

That view is in line with the traditional pattern of rate-rising cycles: in every cycle since 1980 with the exception of 2004-2006, the Fed has made cuts within six months of hitting the peak in interest rates.

“Typically they overtighten until something breaks. That’s likely to be the case in this cycle as well, so we wouldn’t dismiss a tweak at some point later on next year,” said Margaret Kerins, global head of fixed income strategy at BMO Capital Markets.

That goes against what officials have said. Powell on Wednesday was explicit that the central bank does not expect a policy about-face soon.

“My colleagues and I do not want to overtighten. Cutting rates is not something we want to do soon, so that’s why we are slowing down,” the chair told an audience at the Brookings Institution, while reaffirming the central bank’s commitment to get inflation back down to its longstanding 2 per cent target.

“The markets are trying to have their cake and eat it too, hearing Powell say he doesn’t want to overtighten, while ignoring the second half of the sentence where he says they will hold rates in restrictive territory,” said Calvin Tse, head of macro policy for the Americas at BNP Paribas. “The market has taken this too far.”

Investors also cautioned that the shift in markets happened quickly and could easily be undone. 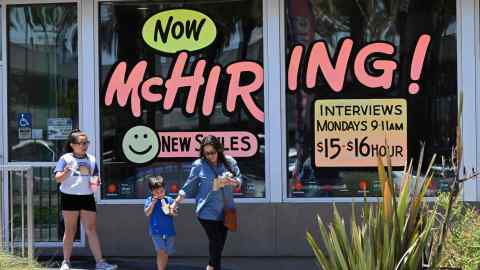 “The market is trading on what it last heard from the Fed and what it’s expecting from the next CPI print,” said Matthew Scott, head of global rates trading at AllianceBernstein. “I don’t think anyone in the market actually has a high degree of conviction about where the Fed will be at the end of next year.”

Economists polled by Bloomberg forecast that consumer prices in November will have risen just 0.3 per cent, translating to a 7.3 per cent annual pace, the slowest rate since December 2021.

Earlier this week, John Williams, president of the New York Fed and one of Powell’s closest colleagues, also said he expects the central bank to keep rates at a level that restrains the economy at least until the end of next year as inflation moderates to between 3 per cent and 3.5 per cent.

“I do see a point, probably in 2024, that we’ll start bringing down nominal interest rates because inflation is coming down,” he said on Monday.

For Steven Abrahams, head of strategy at Amherst Pierpont, the recent swings in market pricing amount to “déjà vu”.

“The market has bet all year long against the Fed holding rates high through 2023. And the market consistently has been wrong,” he said.


US college football: big money game is now beyond a jock