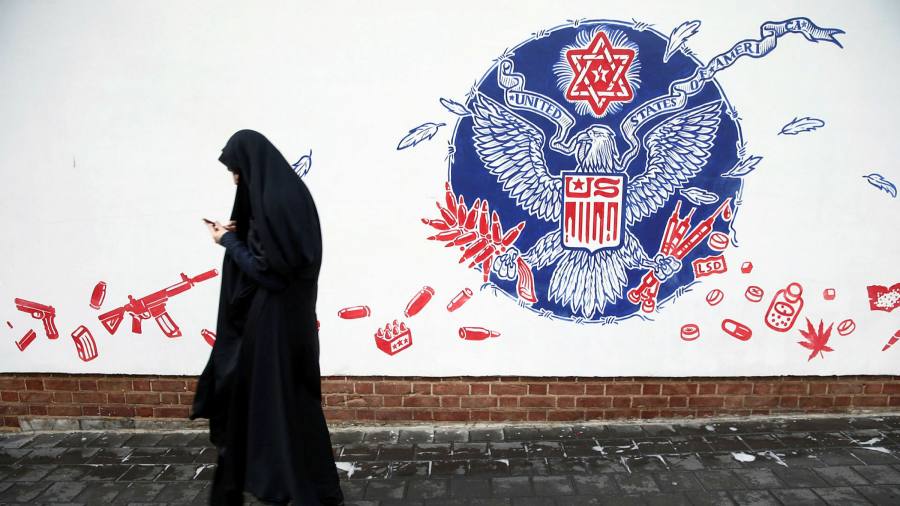 At a trade exhibition in Tehran, businessman Behnam Ronagh’s conversation flipped between the difficulty of operating under the world’s toughest sanctions regime and his hopes that relief could be around the corner.

Nearly four years after former US President Donald Trump abandoned the nuclear deal and reimposed sanctions, Ronagh is betting that indirect talks between Iran and the US to revive the 2015 agreement can succeed and, in turn, revive the fortunes of the Islamic republic’s corporate sector, including the PVC film manufacturer he works for.

Standing in front of his company’s display of burn-proof plastic table cloths, the sales manager enthused about the possibilities of the company attracting a foreign partner and expanding exports if sanctions are lifted. Potential clients in Europe and the Middle East were already reaching out via email, he added.

“Their links are being re-established and they are giving us positive energy,” Ronagh said. “The nuclear deal is important for everybody.”

The 39-year-old’s enthusiasm reflects the tentative optimism in the corporate community as western officials say the nuclear talks in Vienna are in their final stretch.

The optimism is based on the belief that for all their hostilities, Tehran and Washington have no choice but to seal a deal. The republic wants to ease the economic pressure on Iranians as the rial has plummeted and inflation has soared, businesspeople say.

But any positivity is checked by uncertainty about whether regime hardliners, who control all arms of the state, are willing to make compromises to ink a deal. The uncertainty is exacerbated by the difficulty in deciphering Iranian leaders’ statements on the talks as Western officials insist time is running out for Tehran to decide if it wants a deal.

“We are just waiting,” said another businessman, who had to scrap plans with European partners when Trump launched his maximum pressure campaign in 2018.

Even as some businesspeople enthused about the prospects of an agreement, President Ebrahim Raisi dampened the mood. He railed against the US and reiterated that Iranians should not base their hopes on agreements with the west.

Speaking at a meeting of foreign diplomats, Raisi said the Biden administration, which said it wanted to resurrect the deal, had not been “meaningfully different” to Trump’s. “Our nation will not bow to threats, pressure and unilateralism,” Raisi said.

A regime insider said his comments, and others by Ayatollah Ali Khamenei, the supreme leader, indicate Iran’s uncompromising stance towards the talks. “We have asked for a big dinner of shish kebab and salad. If you give it to us, we’ll have good food, ”he said. “If not, we’ll have our bread and cheese as we’ve had for many years,” the person said.

Iranians said the key for Raisi’s hardline government, elected in June, is to secure a deal it can present as a better agreement than the one sealed in 2015 by his predecessor Hassan Rouhani, the pragmatist former president. If not, they say, the regime frets about losing hardline supporters ideologically opposed to engaging with the west.

US President Joe Biden has said he will return to the deal – whose signatories also include Germany, France, UK, Russia and China – if Iran reverses its nuclear advances. But Iran’s negotiators in Vienna want guarantees that no future US president can unilaterally withdraw from a deal, and that all Trump-era sanctions, including those related to human rights and terrorism allegations, are lifted.

Some view the rhetoric from both camps as posturing as they seek to reassure domestic constituencies.

“Iran says that they can run the economy with sanctions no problem, but they know in reality it’s impossible,” said a petrochemicals executive.

He added that Iran’s priority was not attracting western investment, but simply being able to trade freely and export oil. Crude exports slumped from just over 2mn barrels a day in 2017 to fewer than 1mn, which is mostly shipped to China. “We do not need their investment, we need their know-how, their equipment and their markets,” he said.

Westerners in Tehran say European companies are showing interest in engaging with Iran if a deal is struck. But they caution that there is far less momentum than when the agreement was first implemented. Companies that invested then were not only hit by sanctions when the US pulled out but also saw first hand the challenges of operating in the republic.

“The interest is coming back but it’s different to 2015,” said Dagmar von Bohnstein, managing director at the German-Iranian Chamber of Commerce in Tehran. “Definitely businesses are more realistic now.”

She said about 50 companies from Germany, Iran’s biggest European trading partner, remained in the republic after Trump withdrew from the nuclear deal, with Iranian managers overseeing the businesses. Those companies want to expand if sanctions are lifted, “but it’s more difficult to convince their headquarters in Germany to support that strategy”, said von Bohnstein.

“It’s not an easy market, and western companies now understand how hard it is to survive and be successful,” she added.

Another Iranian businessman said some of his western associates have contacted him on WhatsApp, asking “what’s happening”. But he added: “There is nothing serious, no plans and no one saying ‘can we do business in Iran again?'”

“There will always be the fear that the next US administration will pull out,” he added. “It’s the story of Iran, you do not die [under sanctions]but you go into a very deep sleep. ”