Ireland’s coalition under strain from scandal and voter fatigue 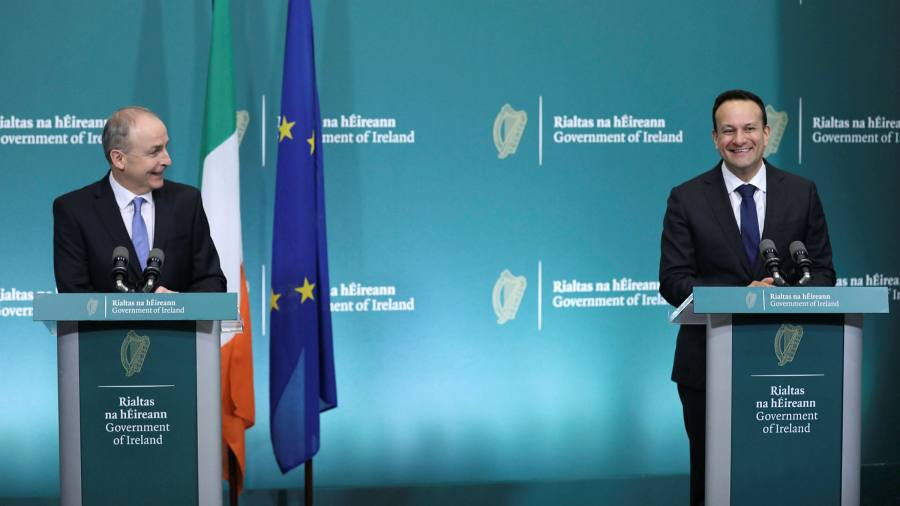 Away from the easing of the coronavirus pandemic, though, his fractious government has far less reason for optimism – and Martin has entered a political autumn.

Having agreed that he would step down this December, he has entered his last year as Taoiseach at the helm of a coalition that has lost popularity after scandals and is struggling to show progress on intractable pre-pandemic problems such as housing and healthcare.

The government’s unpopularity has prompted questions about whether the pact involving Ireland’s two traditional ruling parties – Martin’s Fianna Fáil and Leo Varadkar’s Fine Gael – as well as the Greens can last until the next elections, which are not due until February 2025.

“The government is stable to the extent that none of the three parties can afford to face an election,” said Lucinda Creighton, a former Fine Gael minister and now a consultant. “But the longer they stay in government, history suggests the less popular they are going to be. . . They are in a rut. ”

Martin’s plan to depart this year is the consequence of an unprecedented arrangement hammered out after the 2020 election as a way to keep nationalist party Sinn Féin out of power. Under the deal, Martin will hand over to Varadkar, the Tánaiste or deputy prime minister. Varadkar was premier from 2017 until his party stumbled to third place at the 2020 election.

But Fine Gael has been plummeting in opinion polls and has struggled to shake off a series of scandals. The most recent is “Flutegate” – a champagne celebration in the foreign ministry to toast Ireland’s winning of a UN Security Council seat in June 2020. The celebration contravened Ireland’s Covid-19 guidelines at the time.

“Flutegate” comes on top of other controversies, including “Golfgate” – a parliamentary golf society gathering in 2020 that was also against Covid-19 rules. It prompted resignations from attendees in both main parties, including Phil Hogan, then an EU commissioner. Two politicians are on trial over the event, charged with organizing or allowing an event that breached Covid rules. They deny the charges.

Varadkar is still being investigated by police over a leaked confidential government document relating to a new agreement for doctors – a matter over which he has apologized but denied having broken the law.

“The optics [of the scandals] are terrible, ”said Gary Murphy, a politics professor at Dublin City University. “I do not think the public is obsessed with these issues but they do give a narrative that will be played on by Sinn Féin.”

Fine Gael’s support peaked at 37 per cent in June 2020 and has plummeted to 20 per cent while Fianna Fáil has been flatlining at 20 per cent since June, according to an Ipsos / MRBI poll for the Irish Times published in December.

By contrast, support for Sinn Féin, which has positioned itself with young and increasingly middle class voters as the party of change because of its promises to resolve Ireland’s crisis of unaffordable or unavailable housing, has rocketed to 35 per cent. Access to affordable healthcare is another voter concern, polls show.

An Ireland Thinks poll for the Irish Independent this month found that respondents strongly favored unspecified repercussions for the Flutegate affair and prosecutions related to the golf society event.

For the coalition parties, their best way of connecting with voters may be to highlight Ireland’s economic resilience during Covid-19. Tax revenues hit an all-time high last year and headline gross domestic product is expected to have grown in 2021 by at least 14 per cent, or by at least 5 per cent according to a modified measure that strips out the impact of globalized companies on Ireland’s highly open economy.

The government also wants to make good on ambitious housing and infrastructure plans. According to official data last week, home completions last year were just 0.5 per cent below their level in 2020, despite the closure of some building work in the spring because of Covid, and the number of apartments built increased by nearly one-third.

Ed Brophy, a former adviser to Fine Gael finance minister Paschal Donohoe, said the coalition’s strategy was to “keep out Sinn Féin as long as possible and deal with the issues that are making Sinn Féin popular”.

But energy price rises, feeding into broader inflation, will also further test the government’s ability to show that better times are on the go – even without any renewed Covid-19 surge.