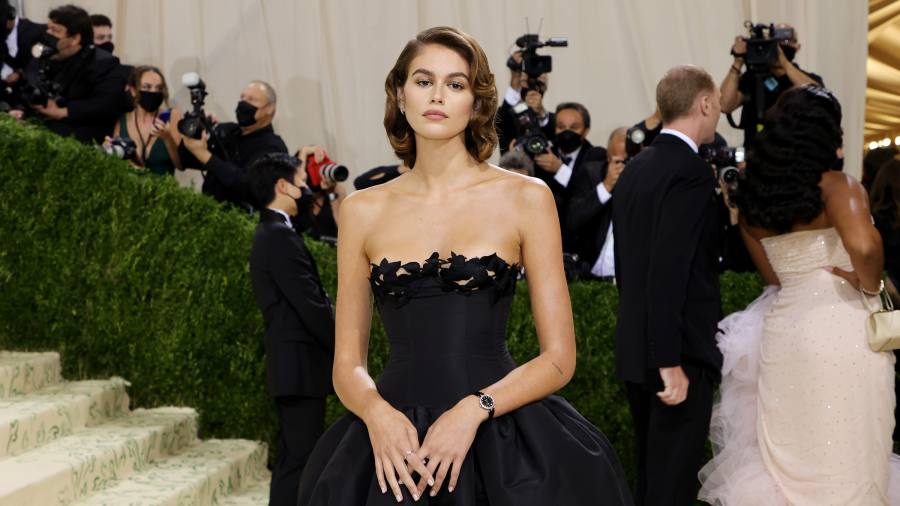 Lipstick, powder, room key – three essentials, according to stylist Elizabeth Saltzman, that any female celebrity needs on the red carpet, and there’s always a publicist at hand to help with those. No one ever said anything about needing a watch. After all, checking the time at any high-profile event is not a good look.

What’s acceptable dress code for the men – Girard-Perregaux, Cartier, Omega and Patek Philippe were all notable presences on male wrists at the Oscars in 2021 – has traditionally not been so for women. But the times are changing, with Chopard a notable leader of the pack.

The brand has been synonymous with the Cannes red carpet since 2007, when it launched its first Haute Joaillerie Red Carpet collection. (Its artistic director and co-president Caroline Scheufele redesigned the Cannes Palme d’Or trophy in 1998.) Marion Cotillard was spotted at the Screen Actors Guild Awards in 2013 wearing an elegant Chopard L’Heure du Diamant, and as Scheufele says: “ Jewelery watches are increasingly becoming a must-have on the red carpet – every year we include them in our Haute Joaillerie sets. Elle Fanning wore a gorgeous diamond and sapphire watch from the Red Carpet collection at the Cannes Festival in 2019, and Rihanna often stepped out with an all-diamond watch from our Happy Sport Joaillerie line. ”

Likewise Charlize Theron at Cannes in 2017, whom Scheufele furnished with the Queen of Kalahari, “Chopard’s most precious jewelery suite of them all”, which includes a secret watch. The D-flawless, pear-shaped and brilliant-cut diamonds of the watch perfectly complemented Theron’s Christian Dior gown. More recently, the maison’s pink-sapphire and diamond Flower Power, from its latest Red Carpet collection, won one of the highest accolades at the Grand Prix d’Horlogerie de Genève.

Isabelle Huppert wore a Boucheron Reflet Large at Cannes 2019 for her daytime photocall for Frankie; ratchet it up a notch or two, set the Reflet with baguette and round diamonds, and the Reflet Pompon takes day into evening. The classic styling of this high-jewelery timepiece does not age. Meanwhile, at last year’s Met Gala, actress Regina King wore a Harry Winston Emerald quartz timepiece as part of her gilded Michael Kors ensemble; singer Kehlani went full Hublot with her Big Bang One Click Rainbow; and model and actress Kaia Gerber, an official brand ambassador for Omega, completed her Met look with a simple De Ville Prestige Dewdrop in stainless-steel case with a diamond-paved bezel. One omission, however, had to be Chanel’s Camélia secret cuff watch, which would have performed spectacularly with Margaret Qualley’s Chanel ensemble. Another time, another place, perhaps.

While high-jewelery watches have a natural place among the finery of big red-carpet events, understated timepieces are perfect for premieres. Laura Dern added a Vacheron Constantin Heures Créatives Heure Romantique in white gold at the recent premiere of West Side Story; Angelina Jolie hit the Eternals red carpet with a Panthère de Cartier. Zita Harnot finished off her sheer black Chanel organza dress with the house’s Boy.Friend watch for the 46th Deauville American Film Festival.

Jaeger-LeCoultre has long been associated with the Venice film festival and recent times have seen its delicately feminine 101 Reine and 101 Feuille high-jewelery watches on the red carpet. Its pieces have sparkled on the wrists of Catherine Deneuve (the Reine) and Amanda Seyfried (the secret Feuille), as well as Hikari Mori and Italian actress Cristiana Capotondi. And this year will undoubtedly see outings for the latest 101 models: the sensuous Bangle watch, with echoes of the geometric forms of art deco; and the delicious delicacy of the 101 Snowdrop with its 904 diamonds.

But a watch can also have an impact even when not worn as a watch, as demonstrated by Salma Hayek at the Golden Globes. Hayek wore Harry Winston’s Ultimate Emerald Signature timepiece – 331 brilliant-cut, 38 baguette-cut, 24 marquise-cut and one emerald-cut diamond – as a brooch to accent her red Alexander McQueen gown.