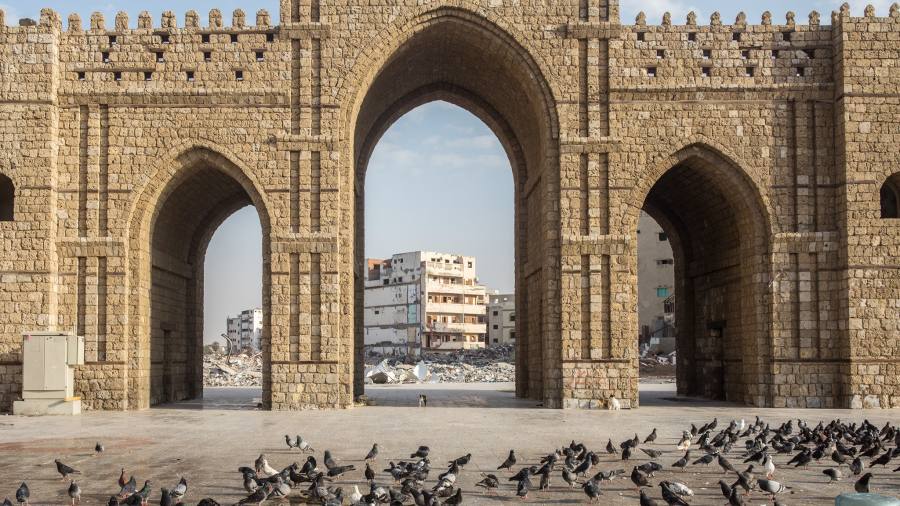 Beyond an old archway in the Saudi Arabian port city of Jeddah, two excavators dig into a field of rubble, all that remains from what was once a neighborhood of low-rise housing blocks. “All demolished. This will all be skyscrapers. Like Dubai, ”said an elderly man near the archway.

Jeddah, affectionately known as the ‘Bride of the Red Sea’, is getting a $ 20bn makeover that has seen entire neighborhoods demolished as part of a government scheme to redevelop the sprawling city that serves as the gateway to the Muslim holy city of Mecca.

It has long been viewed as Saudi Arabia’s commercial and cultural capital. But sweeping changes initiated by Crown Prince Mohammed bin Salman, the day to day ruler who over the past six years has upended social and economic norms in the conservative kingdom, are leaving their mark on the centuries-old city.

The dizzying speed of redevelopment, which began in October, mirrors wider changes. The pace of the demolitions is characteristic of Prince Mohammed’s autocratic leadership, whether he is muzzling the power of the religious police, allowing women to drive, or restructuring a city. The robust approach, which brooks little dissent and that has seen critics, including activists and academics, detained, has rubbed some the wrong way. “It’s like shock therapy,” complained a retired businessman who requested anonymity.

In Jeddah, slums and informal neighborhoods are being razed to make way for new housing and developments. The government plans to build an opera house and museum, among other tourist attractions. “The joke here is someone important flew over Jeddah and looked down on it and said: change it, now,” said the retired businessman.

This seaside city has a cosmopolitan merchant class and a relatively liberal approach to social conventions; its motto has long been “Jeddah is Different”.

But some of the biggest family-owned businesses there have lost out in the Prince Mohammed era. Some, such as the Binladin group, were swept up in a 2017 crackdown that saw tycoons and even princes detained in Riyadh’s Ritz-Carlton hotel, in a move the government said was aimed at retrieving ill-begotten gains. Critics said it was a powerplay by the crown prince.

The demolitions, which could affect about 500,000 people – many of them migrants – from a population of 4mn, are the latest faultline for those concerned about the city’s future.

“It’s a concerted effort to kill Jeddah,” said one local academic, who requested anonymity. Despite the $ 20bn budget – a fraction of what is spent on projects in the capital – he fears that Jeddah is being marginalized in favor of businesses in Riyadh.

Officials say that the capital, which the government wants to turn into one of the world’s largest city economies, is better suited for expansion. The goal to double Riyadh’s population to about 15 million by 2030 has compounded concerns in Jeddah that the city, which has already seen banks and government offices move to Riyadh, stands to lose out.

Such concerns are misplaced, said Said Al Shaikh, a professor of economics at the University of Business and Technology and former chief economist at NCB. “Jeddah has always been the commercial center of the kingdom and it always will be.”

The city’s redevelopment had been neglected for too long, proponents of the demolitions say, allowing thousands of informal homes to be built on government land. A Saudi official told the Financial Times that homeowners would be compensated and that the government was helping the evicted families. About 5,000 new homes will be made available to them by the end of the year. The government will try to regularize the status of evicted migrants on expired visas, he said.

“The government will not neglect the humanitarian aspect when dealing with some nationals of countries undergoing conflict,” he said, referring to Yemenis and Syrians.

Until now, said Ali Shihabi, a Saudi commentator familiar with the leadership’s thinking, “there’s nobody who’s been that bold to take them [the redevelopment] on after 20 years of debate and deadlock ”.

In Jeddah, signs of change are everywhere. Near the newly renovated Corniche, where families lay out mats to picnic on the seaside, Soho Square, a restaurant village advertised on banners as “Making Dreams a Reality”, is under construction.

The culture ministry has undertaken the restoration of some historic buildings, many of which are uninhabited behind their delicately carved wooden window coverings and doors. Abu Ahmed, who owns an old store that sells sweet drinks, said he looked forward to the development. In the meantime, his son, like many other young men, has moved to Riyadh, seeking employment.

“He gave me this,” Abu Ahmed said, proudly pulling out a black jumper from a plastic bag with a logo that read “Riyadh Season,” a months-long entertainment festival that has attracted both tourists and laborers from across the country.

For now, unease remains. “I think this is indicative of the wider change in Saudi Arabia which has been state driven, very much from the top, and dramatic,” said Kristin Diwan, a senior resident scholar with the Arab Gulf States Institute in Washington.

“If you look at a situation like Jeddah there’s no question that Jeddah’s development has been neglected [until now]. The question is whether there has been any room for public input and community involvement. ”