Joni Mitchell said she would remove her music from Spotify, supporting Neil Young’s revolt against the company over podcaster Joe Rogan, who they accuse of spreading “lies” about Covid vaccines.

“Irresponsible people are spreading lies that are costing people their lives,” Mitchell posted on her website late on Friday. “I stand in solidarity with Neil Young and the global scientific and medical communities on this issue.”

The singer-songwriter is the second major artist to boycott Spotify in the past week, as a backlash grows over the company’s role as a platform for spreading misinformation about the coronavirus and vaccines. 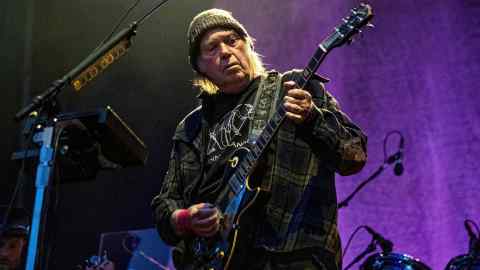 Spotify in 2020 paid $ 100m to bring popular podcaster Joe Rogan to its app exclusively. Since then Spotify has faced a backlash from its own staff as well as Spotify users over its association with the controversial American commentator.

Young earlier this week threatened to remove his music from Spotify – and followed through on it – in response to a December podcast in which Rogan interviewed Robert Malone, a virologist who is critical of messenger RNA vaccines and has been banned from YouTube and Twitter for violating their misinformation policies. Rogan has also on his podcast encouraged young people not to get a Covid-19 vaccine.

As of Saturday morning most of Mitchell’s albums, including Blue spirit Both Sides, Now, were not available on Spotify. Warner Music, the record company behind both Mitchell and Young, has also removed Young’s repertoire.

“Thank you Warner Brothers for standing with me and taking the hit – losing 60 percent of my worldwide streaming income in the name of Truth,” Young wrote on his website. Spotify has become the home of life-threatening Covid misinformation. Lies being sold for money ”.

The battle has left Spotify in an uncomfortable position. Rogan hosts the most popular podcast on Spotify; some 11m people tune in. As Spotify pushes further into its own content, it is grappling with similar challenges to other big tech platforms such as YouTube, which have come under fire over conspiracy theories and “fake news” spread on their sites.

Despite the crusade from these singers, no other major artists have spoken out against Spotify, which is the biggest music streaming platform.

A group of doctors and scientists earlier this month called on Spotify to “moderate misinformation” on its platform, arguing that Rogan has spread false claims about the coronavirus pandemic. “Mass-misinformation events of this scale have extraordinarily dangerous ramifications,” they wrote.

When asked in 2020 about Rogan’s decision to invite conspiracy theorist Alex Jones to his podcast, Spotify’s chief executive Daniel Ek told the Financial Times: “We want creators to create. It’s what they do best. We are not looking to play a role in what they should say. ”