Kharkiv: a personal chronicle of war 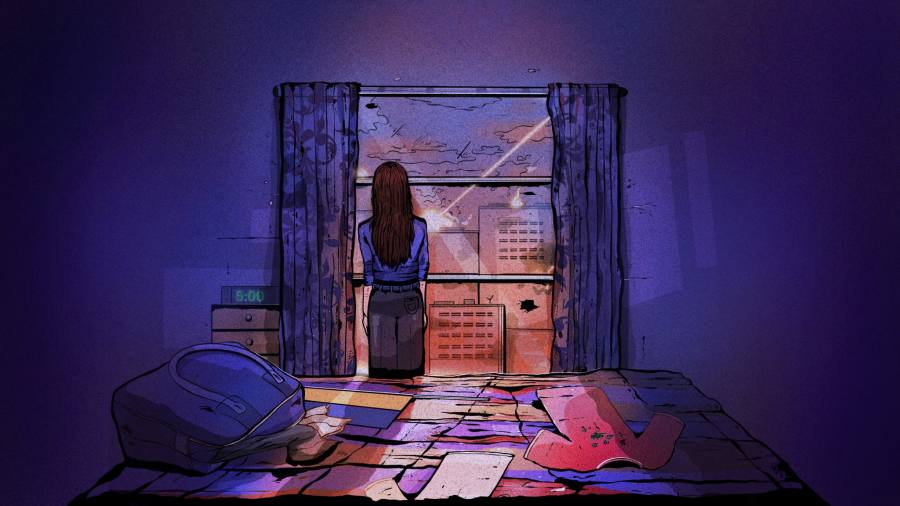 An ordinary day in Kharkiv. Wednesday. It’s still winter, but spring is already in the air. I take my son to school, do a little work in the morning, think about my deadline – I need to finish my children’s fairy tale by the end of the month. The sun is shining brightly, so I put on a light coat and sunglasses and head out to meet a friend I haven’t seen in months.

We meet in a cafe downtown. My friend tells me that she has just bought an apartment. I’m surprised, because the situation here seems uncertain. I want to say this, but I bite my tongue.

I take my son to capoeira training, and slip away to buy a leather biker jacket – I have so many dresses, the jacket will give them a more fashionable look. I have three new books coming out, two children’s stories and a young adult novel about the war in Donbas, so I need a lot of beautiful dresses for presentations. I help my son with his homework. Once he has fallen asleep, I pour a glass of white wine. Anxiety. I go to bed after midnight.

Explosions throw me out of bed. I pull back the curtain – it is still dark outside, car alarms are screaming. I look at my smartphone: 5am. Someone runs outside, trying to figure out what is going on. The explosions continue. The windows are shaking, the glass is ringing. The house seems to be pulsating. My husband Ihor is already getting dressed. “What it is?” – I ask, although I know the answer. “This is it. It started, ”he replies, pulling on his jeans.

“It” is the Russian invasion, the thing that has been talked about so much in the past few months, but which, stubbornly, nobody believed would happen. It was so hard to imagine that people started using it as a meme to get out of things they did not want to do: “Let’s do it after the invasion.”

The explosions continue. “Pack your stuff, you have to leave,” says my husband. I try to protest, suggesting I wait until the evening, but eventually give up, pack two small backpacks and put the cat into a carrier. I wake my son. He is confused about why he does not have to go to school, then hears the explosions and starts crying.

We go to my husband’s friend’s place, to pick up his cat. He meets us already dressed in camouflage with a large backpack. He is a paramedic and intends to go to a military unit straight away. We barely stuff our backpacks into another friend’s car – he is taking his wife and small child out of the city. I say goodbye to my husband, who is staying on to defend Kharkiv. On the roads, there are miles of terrible traffic jams, and the radio carries news of missile strikes all over Ukraine.

Finally, after an hour and a half, we reach the ring road – and see a convoy of military vehicles, tanks and infantry moving around the village of Lyptsy towards Kharkiv. The vehicles are marked with a white letter “Z”. These are the vehicles of the Russian occupants. To us, the letter means “zombies”.

We arrive in Poltava. My husband’s friend, along with his wife and his child, carries on into the unknown – there is no one they can go to. I spend the rest of the day scrolling through the news on the Telegram messaging app.

I can not sleep, can not eat. We are close enough to Kharkiv to hear the earth shake as the Russians shell the city. Denial. Remorse. Bargaining. Depression. Acceptance. I have gone through all the stages of awareness of the war. I shudder at the loud sounds, and do not let go of my phone. My husband writes that he has already joined the territorial defense – a battalion formed by former IT specialists, designers, teachers and other regular citizens to protect the city. There are so many applicants that only those with combat experience are accepted.

My home in Kharkiv is in an area called Saltivka, 30 minutes from the border with Russia. And it is this area that has been under relentless shelling since the first day of the war, although there are no military facilities here, only residential high-rises. They shell this area using “Grads”, “Hurricanes”, “Tornadoes” and God knows what else. Later comes the worst – air raids.

“I have never seen air raids live, only in the movies,” my friend Alyona writes to me. “But when I heard that sound, I immediately realized – this is it. It is very difficult to describe those feelings – horror, panic, fear? It feels as if consciousness has separated from the body, all emotions have disappeared, and only the total feeling of all-consuming horror remains. ”

It’s a sleepless night again for me, with my phone in my hands. And thoughts – if only we could hold Kharkiv and Kyiv.

Kharkiv and, particularly, Saltivka are under constant shelling. My nine-year-old son’s classmates sit in bomb shelters and basements instead of sitting at desks. Kindergartens, schools and houses have been destroyed.

“It is a terrorist tactic to take civilians hostage to force a military surrender,” says my colleague Marina, a journalist. In 2014, the city miraculously escaped the fate of Donetsk and Luhansk, which became the capitals of so-called people’s republics. “Putin hates our city because Kharkiv did not become the capital of collaborationist Ukraine; because, although it is Russian-speaking, it did not greet the occupants with flowers. ”

The biggest mistake of the Russians was to consider the Ukrainian mentality similar to their own, and our peoples fraternal. Now the difference in world view is obvious.

I have lost track of the date, the day of the week. At 8am, the Russians attacked Kharkiv’s central Freedom Square, firing a rocket at the building where the Regional Defense Headquarters is located. The shelling continues. People who had gone out to buy water and food are killed. I see a picture of a woman lying near a store, her legs torn off. A few days ago, such images could not have been imagined in European Ukraine. We need NATO’s support to impose a no-fly zone over Ukraine. Otherwise, the Russians will continue to kill us.

I check my Facebook. Hundreds of status updates from my friends, all about the war. “The bombing does not stop,” writes Olena. “We are hiding in the basement of our school. Something big is falling very close by. If they destroy the substation and the lights go out, we will not be able to stay here any more. Very scared. Very. ”

My mother and I make our way to our hometown, close to Kharkiv. The place is in a state of panic. There is no bread or other staple products, but crowds of people and cars. More than 100 people want to withdraw cash from the only ATM. The money runs out quickly. Queues, queues, queues. I manage to buy 5kg of cat food – this is a considerable happiness. Meanwhile, my husband writes that his combat boots have torn, and I am starting to do what I have been doing since 2014 to quell the paralyzing fear that Russia will come to my land, my home and take everything away. I am becoming a little volunteer again.

I try to write between searching for combat boots, medicine, and power outlets. I know I need to tell the world what is happening here. “Write to us about culture in Kharkiv,” a Polish journalist suggests. “We do not have culture right now,” I reply. “We only have a continuous round-the-clock hell.”

In everything I write, I emphasize that the Russians are not our brothers. The only flowers that will greet them in Ukraine are funeral wreaths.

The Russians are not our brothers. The only flowers that will greet them in Ukraine are funeral wreaths

Kharkiv, a city that had strong family and economic ties with Russia before the war, has already passed a point of no return. It seems to me that the Russians themselves are not yet aware of the power of hatred they have aroused. Our children already despise them – and it was not us who taught them this feeling, but the occupiers themselves.

In the evening I hear that a missile has hit a territorial defense HQ. My husband does not reply to my messages. My hands shake. I can not help but cry. It’s only hours later that I receive a message from him: “OK”. For the first time since the outbreak of the war, I sleep for six whole hours.

Today I caught myself thinking: everything that was before the war is as if from a past life. Today I read in our building chat that the entrance next to mine was hit.

I only regret not taking two things from our apartment – a Ukrainian flag and my embroidered shirts. But I will definitely come back for them.

Yuliya Iliukha is a writer from Kharkiv

Read more personal accounts of the war in Ukraine:

Writer Oleksandr Softness on the language of war

Kyiv diary from journalist Kristina Berdynskykh, who asks: ‘Was I right not to leave?’

Novelist Haska Shyyan on telling her daughter about the war

An interview with film-maker Sergei Loznitsa: ‘Lies bring us to the catastrophe we are facing’


Russia to block Instagram in widening of media crackdown