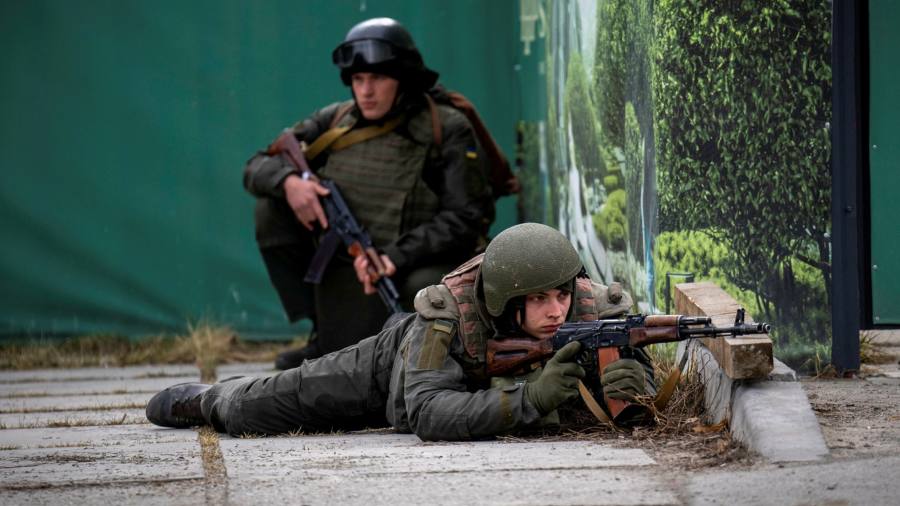 Mykhaylo was one of several hundred men queuing up outside a military enlistment office in Kyiv’s central Lukianivska neighborhood on Friday, looking for guns to fight invading Russian forces.

He was also looking for a recipient for a donation of 60 bottles that might be used to make petrol bombs: “To, you know, greet the Russians – a big cocktail party”, he said. “A buddy of mine is getting processed machine oil to serve to the Russians.”

As he was speaking, the waiting crowd scattered in panic as someone pointed to the sky at a surveillance drone hovering overhead that they feared could presage a Russian air attack. Someone in the heavily armed crowd fired an automatic weapon.

“Close the skies! Hashtag, ban Russia from Swift! ” Mykhaylo said with a caustic smile, spelling out two slogans being shared on Ukrainian social media in the days since Russia’s invasion this week. “And also, remove Russia from the UN Security Council.”

Vladimir Putin’s troops were advancing into the outskirts of the capital city, steadily overpowering Kyiv’s defenses. In an early morning video address, President Volodymyr Zelensky, dressed in a green T-shirt and military-style sweater, said Russia was aiming to assassinate him.

By Friday morning the Russians had reached Obolon, a northern suburb, fueling fears in Kyiv that street battles with the city’s invaders were coming next.

Across Ukraine, people reacted with disbelief, determination, and raw anger – directed mostly at Russia, but also at western countries – to an attack on their state that had been building in plain sight for months, then this week escalated into a major European war .

“It’s crap. What else can I say? ” said Denys, an IT specialist standing nearby in the uniform of the territorial defense force, armed with a machine gun.

“I think we’re just teetering on the brink of survival,” he said. “The country will either survive, or it will not – and it will be torn apart, and there will be no Ukraine afterwards.”

He added: “I want Ukraine to keep going.”

Putin’s air and ground attack on Ukraine brought with it images rarely seen in Europe since the second world war. In Kyiv and the eastern city of Kharkiv, people bedded down on metro platforms after air raid sirens wailed and officials warned residents to take shelter from air attack.

In Kyiv, an elegant and, until this week, buzzing European capital of 3m whose residents like to compare it with Berlin, businesses closed and people crowded supermarkets to stock up on emergency supplies. Some grabbed suitcases to flee the Russian advance by car or on foot.

Ukrainians hunkering in emergency shelters scrolled through news of the threat to their state on their phones. Online, people eased the tension and worry by trading humorous memes.

One showed a plane flying over a war zone, with the US and EU flags and a smiley face emblazoned on its fuselage, tailed by a banner reading “YOU’RE DOING GREAT!”

“All you need to do is to close the skies and sanction Putin personally,” a man outside the military recruitment office said when asked by a journalist for comments for a British newspaper. “And thank you, foreign love,” he added sarcastically. “God save the Queen! And kill Putin’s regime. “

Ukraine’s official Twitter account urged users of the social media platform to “Tag @Russia and tell them what you think about them”.

“It’s surreal,” said Yaryna Kozel, 21, a professional public relations professional taking cover in an emergency shelter in the downtown Podil neighborhood. “I never imagined that it could happen in 2022 that people in one country could just kill people in another independent country.”

Kozel found out about the Russian attack at 6am on Thursday, when she saw several missed calls on her phone from her manager. “I thought it was a cyber attack at first,” she said.

She grabbed a first-aid kit, warm clothes and headed first to a hotel, then when it closed, to the shelter in Podil near her boyfriend’s home.

On Friday she brought water, juice, bread, fruit, and sanitary napkins to the shelter, where she was reclining on a yoga mat. About 10 other people were staying there, and two dogs were also trotting around in the space. Muffled booms and, at one point, automatic gunfire could be heard from underground.

Viktoria Zolotoverkha, who worked as a bartender before the war, left her neighborhood after Thursday’s invasion because she felt it was not safe, and tried to check into a hotel. “The Russians are attacking just regular buildings,” she said. “We do not know what’s happening”.

The hotel was closing, so she headed for the underground shelter.

When asked for her opinion about the outbreak of war, Zolotoverkha said with a chipper smile and without hesitation: “Fubar”.

“Fucked up beyond all recognition,” she said. “That’s how I feel.”