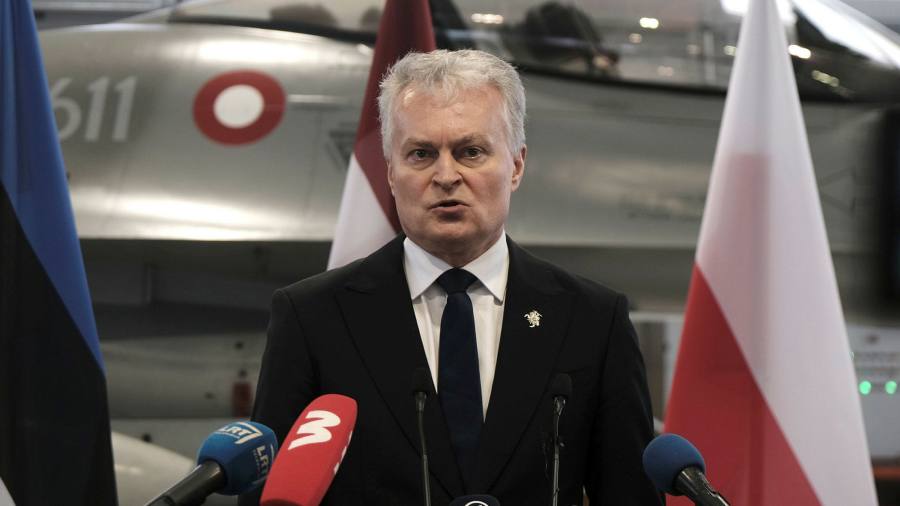 Lithuania’s president called for Germany and the US to commit more troops to his Baltic country and send a signal to Moscow over its military build-up in Ukraine and neighboring Belarus.

Gitanas Nauseda said the Baltic countries were facing their “most dangerous situation since regaining independence” in 1990-91 due to the more than 100,000 Russian troops amassed on the border with Ukraine and “even more importantly” their presence in Belarus, an ally of Moscow .

That puts Russia’s military potentially only 100km from its exclave in Kaliningrad, along the narrow “Suwalki gap” that divides Lithuania and the other Baltic states from Poland and the rest of Europe.

“We discuss with our partners, first of all with Germany which is leading the EFP battlegroup in Lithuania, just to react to those processes. They are ready to discuss. So far I can not say it’s leading to a direct result but. . . at the end of the day I hope we will have this result [of more troops]”Nauseda said.

NATO countries are reinforcing their military presence along the eastern flank of the alliance. The UK has said it will double its contingent of troops in Estonia, where it leads the multinational battlegroup under NATO’s enhanced forward presence. The US said on Wednesday it would send 2,000 extra troops to Europe to bolster NATO’s presence.

Germany is the lead nation of the Nato battlegroup in Lithuania but has faced criticism from many in eastern Europe for its perceived slow response to Russia’s saber-rattling in Ukraine as well as its delay in dealing with a request from Estonia to send howitzers once housed in the former east Germany to Kyiv.

Artis Pabriks, Latvia’s defense minister, last week told the FT that Germany had an “immoral and hypocritical” relationship to both Moscow and Beijing, which is also pressuring Lithuania over its decision to open a representative office of Taiwan in Vilnius.

Nauseda called Germany “our big friend” and stressed Lithuania was in “close contact” between with the president, government and military in Berlin.

“I hope that Germany understands very well what is happening here. But we need right now very clear signals. Concrete actions are very important, but sometimes rhetoric and a united standpoint are important too, especially to some adversaries, ”he added.

Germany, which has 550 soldiers stationed in Lithuania as part of the 1,200-strong battlegroup, declined to comment on Nauseda’s comments.

German and Lithuanian officials said military planning for reinforcements was ready, with hundreds of potential troops working in Germany’s artillery, reconnaissance, and chemical, biological, radiological and nuclear defense as well as air defense. But both said it was dependent on political decision-making in Berlin, which is complicated by the recently-installed three-party coalition.

Nauseda said it was not necessary for Berlin to double its commitment, as the UK has promised in Estonia.

“This is not probably a matter of concrete figures or concrete equipment. But it’s a matter first of all of readiness and commitment to react. Otherwise [somebody] can get the feeling that Nato is observing the situation and not reacting. It would be a very wrong signal to some countries in the east, ”he added.

The US also has troops in Lithuania, with a battalion present on rotation since 2019. “We expect that US troops on a rotational basis will be increased too,” Nauseda said.

The president and other officials in Vilnius said they were particularly concerned about the de facto Russian military takeover of Belarus in recent years. Tens of thousands of Russian troops are being deployed there, ostensibly for a military exercise but with fears in Vilnius and elsewhere that they could stay on.

The Suwalki Gap, the border between Poland and Lithuania between Kaliningrad and Belarus, is widely seen as NATO’s biggest vulnerability in Europe and an easy way for Russia to cut the Baltic states off if needed.

“Lithuania feels sandwiched between this heavily militarized area of ​​Kaliningrad and Belarus,” said Nauseda. “It means that Russia has all the possibilities to deploy military capabilities in the territory of Belarus, threatening the neighbors, not necessarily Ukraine but also Poland, the Baltic countries.”

Lithuania and the other Baltic states have wanted permanent US bases in their country but Washington prefers to rotate them throughout eastern Europe.

Margiris Abukevicius, Lithuania’s deputy defense minister, told the FT: “We in Lithuania, we are very much looking to Germany. We are talking. It is very important that they step up and reinforce their presence. ”

Why do some people get Covid while others don’t?