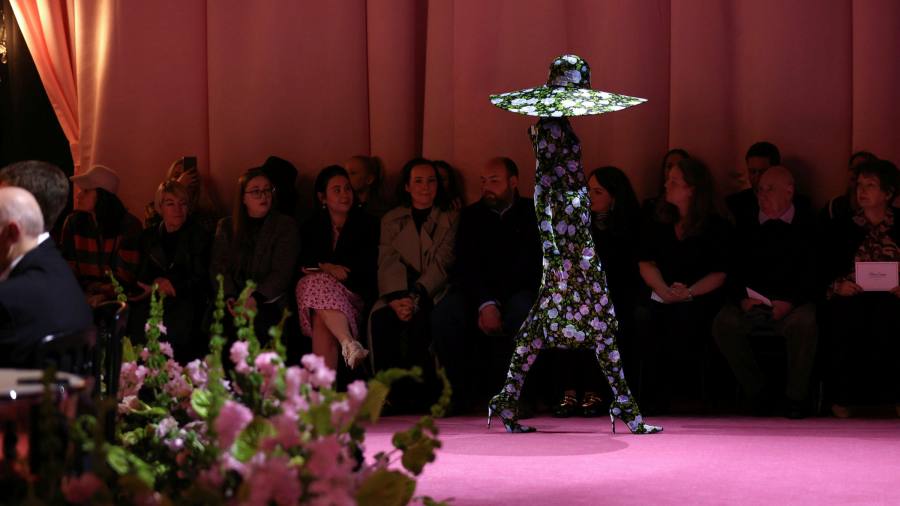 It was an atypical choice of venue for the designer, who had held his most recent physical catwalk show two years ago in the Old Bailey in central London, and whose unabashedly glamorous disco clothes are stocked in Harrods and Net-a-Porter and ordered bespoke by moneyed clients who now comprise about a fifth of his business.

But the pandemic has transformed Halpern and how he markets his collections. He spent the first lockdown sewing surgical gowns for the NHS, and instead of a catwalk show the following September, eight frontline workers dressed for a video that spotlighted their life-saving work. It was a hit.

And so instead of a hotel or a museum, models walked the windowless, green-carpeted lower floor of the Brixton Recreation Center in head-to-toe sequins and dip-dye fringe, and fluid, bias-cut silk dresses in sorbet colors inspired by Anjelica Huston in the ’70s. The recreation center is near Halpern’s studio and previously lacked electricity; his production team wired the space for the show and donated it for community use afterwards.

“Going back to runway [after two years], I did not feel comfortable just going back to an up-and-down techno moment without any kind of bigger meaning or story, ”he said backstage. “It does not feel relevant.”

Halpern is not alone in his thinking. More than a few of the 37 brands that returned to in-person shows in London this season – up from 26 six months ago – displayed an urge to do something more considered and memorable than a standard catwalk show. (Given that they cost at least £ 100,000 to host and can number as many as 10 a day, it seems well worth the effort.)

The South Korean-born designer Rejina Pyo hosted an intimate show at the Mandarin Oriental’s The Aubrey bar, where guests clustered around marble-top tables to snack on Japanese canapés and cocktails as they took in the collection of relaxed wool check suits and body-skimming floral dresses with enough stretch “to have room to eat your dinner”, she said.

The English Chamber Orchestra accompanied the voluminous floral coats and wide-brimmed hats shown under a large crystal chandelier at Richard Quinn (though his shows were grandiose prior to the pandemic). Dance students performed in a mishmash of ruffled bedroom florals and punkish tulle-and-lace dresses in a basement Charing Cross nightclub for Preen; and in assertive wide-leg trouser suits, knit vests, striped shirts and dressing robes (worn by both men and women) for SS Daley, who with an antique chaise longue, leftover picnic and a dining table set for six conjured up an English country house within his modest black-box show space.

Daley, who launched his menswear label straight out of the University of Westminster early in the pandemic, and who is short-listed for this year’s LVMH Prize for emerging designers, is among the buzziest young names on the London calendar. For his debut show in September, he staged an immersive short play with the National Youth Theater about class and the British school system. It was a tough act to follow, but this season’s performance, choreographed by Leo Meredith, delivered: dancers coupled and recoupled, tussled and embraced – playing out “breaking the constrictions of a codified world and the repressions of those trapped within its privileges”, he wrote in his show notes. Daley has a talent for design but more importantly for universe-building, finding, like the more established Erdem Moralioglu, inspiration in the tastes, lifestyles and sexual fluidity of the English upper classes.

London is not lacking in young talent, despite the pandemic and the costs and complications of Brexit. There were standout collections too from Priya Ahluwalia, who tapped Nollywood and Bollywood for inspiration for her grid-print denim, knit bike shorts and dark trouser suits slashed with waves of green and orange, and from last year’s LVMH Prize winner Nensi Dojaka, who fitted an impressively body-diverse range of models in her signature bra-top dresses and snug trouser suits. They proved her clothes look good not only on Dua Lipa, Zendaya and other gazelle-like celebrities who are photographed in them regularly.

Erdem Moralioglu’s label turned 15 last year, making him a veteran of the fashion week calendar. This season he turned again to Dora Kallmus, aka Madame d’Ora, an Austrian fashion and portrait photographer who captured “extraordinary women that often played with gender fluidity”, he said backstage. That translated to ’30s-ish pleated and beaded evening dresses that clung to the hips and black semi-sheer dresses paired with studded leather opera gloves, their silhouettes thrown into relief by the strong spotlights overhead.

Roksanda took over the central hall of Tate Britain to deliver a confident collection of color-blocked fluorescents and even more daring proportions, the overt femininity of the hoop-skirted and cape-back dresses tempered by anoraks, moon boots and other sporty paraphernalia as part of a collaboration with sportswear giant Fila. (One of the dresses was also released as an NFT). Like Roksanda, Emilia Wickstead is known for her dresses, and she deftly drew on the costumes and interiors in the ’60s Italian films The Adventure spirit La Notte for her sleek checkerboard and pleated cape-back dresses and smart woolen skirt suits, which she unveiled via a video and one-on-one appointments at the Ritz.

Simone Rocha went deeper in time, finding inspiration in an old Irish myth about King Lir’s children, who were transformed into swans by a jealous stepmother and lived 900 years. Thus Rocha molded her clothes after their shapes and colors: a midnight-blue velvet dress with high, round shoulders and hips; a red-beaded ivory neglected with trailing silk ribbons; a black coat cut in the heart shape of a bird’s breast, through which sashes of white cotton fanned out like feathers. It was lovely and sad, as good live shows can sometimes be.