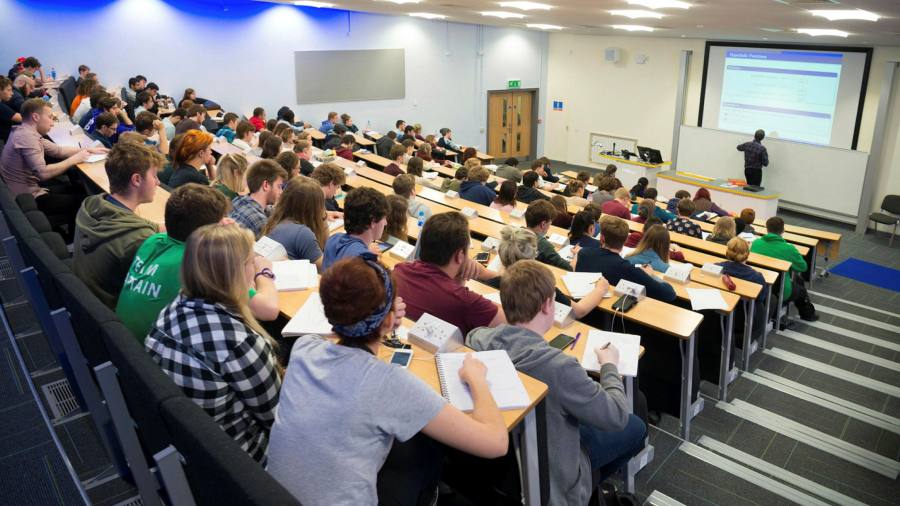 Lower-earning graduates in England will see their lifetime repayments more than double while high-earners will pay back much less, according to the government’s own analysis of its sweeping reforms of student loans.

The assessment revealed that the changes announced on Thursday would leave mid-to-low earners in the fourth income decile on average paying back 174 per cent more of their student loan, equivalent to an extra £ 11,600, than under the existing scheme.

Conversely, the analysis showed that the highest 10 per cent of earners would see their lifetime repayments fall by 26 per cent under the new system that comes into force next year.

The reforms, which were part of the government’s response to the 2019 Augar review of post-18 education, followed a decision last month by ministers to continue to reduce real-term funding for universities by freezing the cap on tuition fees at £ 9,250 for the sixth successive year.

Further changes that will come into effect for students starting university in September 2023, will cut the salary threshold at which students start paying back their loans from £ 27,295 to £ 25,000. The cut off point at which any portion of unpaid loans will be written off will be extended from 30 to 40 years, while the interest rate on loans will be reduced.

Unveiling the reforms, Michelle Donelan, the higher and further education minister, said the changes would make the system “fair” and leave the taxpayer footing less of the bill.

But the government’s analysis found that the changes would leave middle earning graduates in the sixth earnings deciles paying an additional £ 16,500 over the lifetime of the loan, compared to the existing system.

The existing system tends to penalize higher earners who are able to pay back the loans along with the accrued level of interest. The planned cut in the interest rate will mean they will have to pay back less, while lower earners, who previously had any unpaid portion of their loan written off after 30 years, face 10 more years of repayments.

They could have relied more on the tax system to avoid this hit on lower earning graduates and it’s a political decision that they chose not to do that.

Calculations by the Institute for Fiscal Studies, an influential think-tank, also found the changes would discriminate against women. It found men would pay around £ 5,500 less on average towards their loan under the new system, while women would on average pay £ 6,600 more.

The IFS found the reforms would secure the government a “modest” saving of £ 1bn for every annual intake of students by reducing the cost of each cohort from £ 7bn to £ 6bn.

The think-tank said the biggest immediate boost to public finances was because of an accounting quirk. It said this was because the loans and accrued interest were included in government accounting of its student finance spend. By slashing the interest rate on loans, the government would reduce the size of the total debt.

The IFS said these changes “considerably” helped the government deficit in the short run – driving it down by £ 5bn in 2023, while in later years the government would collect less.

Ben Waltmann, an economist at the IFS, said lowering the interest rate would ensure more students repaid their loan in full. However he said the advantages to the taxpayer should be weighed against the “strong negative impact” on the lower paid.

“They could have relied more on the tax system to avoid this hit on lower earning graduates and it’s a political decision that they chose not to do that,” he added.

David Willetts, a chief architect of the reforms in 2012 when he was university minister, said the high interest rates under the existing regime were the “most progressive part” of that system, because it ensured highest earners paid back more. But he said the reforms were “necessary adjustments” as the previous system was costing the taxpayer too much.