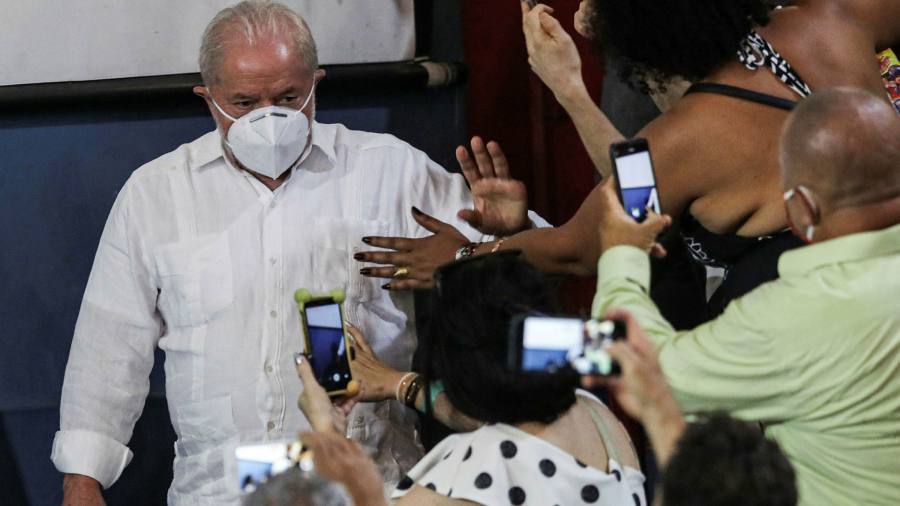 Ahead of a presidential election, he is favored to win for the third time, Luiz Inácio Lula da Silva has argued that one way to solve Brazil’s problems is to “put the poor in the budget” and “tax the rich”.

The man known as Lula made it clear in comments to reporters this month that his priority was to fight inequality instead of sticking to a rule that limits public spending.

In addition to the slogans, clues are emerging as to what the veteran left-winger may have in store for Latin America’s largest economy, which under incumbent right-wing extremist Jair Bolsonaro is in the grip of double-digit inflation and faces a possible stagnation in 2022.

Although the 76-year-old former trade unionist has yet to formally declare his candidacy for election in October, he and senior members of his Labor Party, or PT, have issued plans to increase public investment, stop privatizations, strengthen labor laws and raise incomes. All this is supported by a greater role for the government.

“Our party’s focus is on the national economy. This means that the Brazilian state will have to meet a strong agenda to bring about economic development, “said Gleisi Hoffmann, president of PT. “This is done with jobs, social programs and the presence of the state.”

Critics warn that such an approach is doomed to repeat past mistakes. Fourteen years of PT rule until 2016 ended with Brazil’s deepest recession ever, a massive corruption scandal and the Supreme Court of Lula’s hand-picked successor, Dilma Rousseff.

Yet Lula’s rhetoric has appealed to many of those who have suffered the most during the Covid-19 pandemic since his return to the political scene after convictions for which he served a prison sentence were overturned on a technicality last year.

The left would get 44 percent of the vote in the first round against 24 percent for Bolsonaro, according to a poll published this week by Ipespe / XP. However, a rejection rate of 43 percent for the potential challenger showed that public support is far from uniform.

For the country’s influential business class, the question is which Lula will take responsibility if he is re-elected. Will it be the pragmatist who largely embraced economic orthodoxy when he first took office in 2003, while at the same time alleviating poverty with welfare schemes? Or the second-period leader who ushered in an era of expanded government intervention and spending in response to the global financial crisis?

“The hope is that Lula will be financially responsible,” said one investment banker, “and not have economic policies that will inevitably lead to the same disaster that happened under the Dilma government.”

So far, the septuagenarian has been meticulous with details. Party insiders insist he will not appoint a finance spokesman, apparently to quell speculation about candidates for the portfolio.

The eyebrows were raised this month when Guido Mantega, a longtime finance minister at PT who eventually lost investor confidence, was chosen by Lula’s camp to write a newspaper article in a series of financial advisers to aspiring presidents.

While stressing that they did not speak for Lula, several participants from a group of about 80 economists who have held debates with the ex-president described a vision of economic recovery inspired by US President Joe Biden’s Covid stimulus package.

“We are not neoliberal, we do not agree with a minimal state, we do not accept a country with this level of inequality,” said Aloizio Mercadante, a former minister and head of the Perseu Abreu Foundation, a PT think tank that hosts discussions .

Certain issues are totemic for the party, such as a 2017 labor reform that claims workers’ rights are degraded without increasing employment.

Following the initial proposals for repeal, the talk among the PT management is now about a “revision”, which has been negotiated between government, trade unions and business groups. Items raised so far include zero-hour contracts, access to employment tribunals, union dues rules and app employee rights.

Other ideas may prove to be unsettling for investors. With PT against the sale of major state-owned companies, Hoffman said the Bolsonaro administration’s planned reduction of a controlling stake in the electricity company Eletrobras could be “re-evaluated” if it goes through.

“If it has an impact on development, it can not continue [that way]. It is a strategic company. What is the logic of leaving it to private initiative? ” she added.

As the central bank has aggressively raised interest rates, some economists close to PT criticize a monetary policy reliance to tackle inflation, arguing that there is a role to be played by state-controlled oil producer Petrobras.

Among the proposed options are adjustments to the company’s policy of pricing diesel and petrol in line with international markets. Another is a “stabilization fund”, funded by taxes on crude oil exports, to help even out volatility in fuel prices.

“Inflation has several causes – it needs more solutions,” said Pedro Rossi, a professor at the State University of Campinas.

A potential vote winner is Lula’s call to increase payments by 50 percent under a cash transfer scheme for the country’s poorest, which Bolsonaro has already increased to R $ 400 ($ 73) a month.

However, given Brazil’s high level of debt, a major concern for investors is the management of public accounts. At present, a constitutional provision limits the growth of the public budget to the rate of inflation.

Nelson Barbosa, a former finance minister under Rousseff who has taken part in talks with Lula, argued that this should be changed to accommodate extra spending to boost the recovery from the Covid crisis.

A new framework could discriminate against investments and rules to prevent declines in health and education spending per capita. inhabitant.

‘It would be a goal that allows it [spending] to grow, but not in an explosive way, ”Barbosa said. “Some fiscal expansion will be needed in 2023… For this to be compatible with economic stability, it will have to come up with a redesign of fiscal anchors.”

Investments could initially be paid off with loans, he added, then by an increase in government revenue through growth and tax reforms.

The government is already pushing for a tax on dividends, reducing the corporate rate and exempting low-wage earners. But PT wants an even more progressive system.

Some observers believe that Lula will end up taking moderate positions, not least because of the realities of building coalitions for election campaigns and government in Brazil.

This view was galvanized at his recent press conference when Lula said he was open to center-right politician and former rival Geraldo Alckmin as a candidate.

“The market today has greater hopes that Lula can be a good president of the economy, more responsible and able to implement a good agenda than Bolsonaro,” the investment banker said.