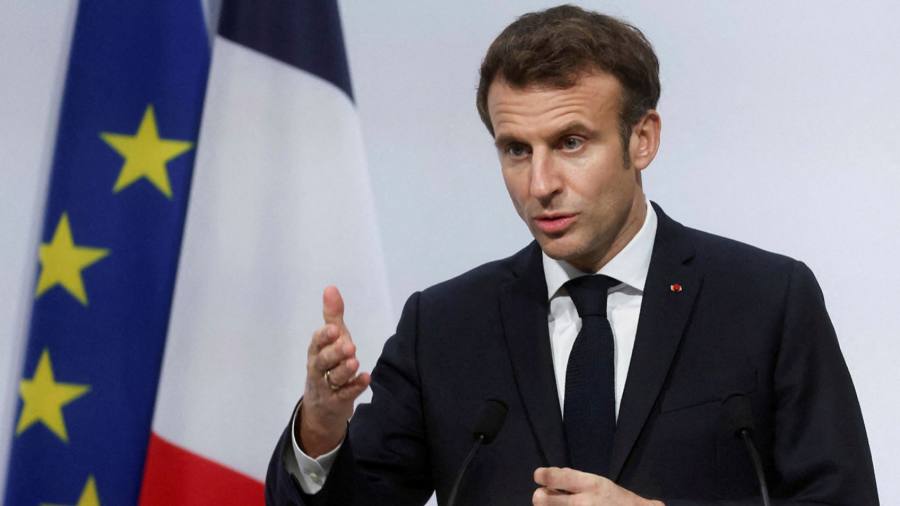 French president Emmanuel Macron has signaled he will recognize Russian security concerns without abandoning support for Ukraine’s sovereignty when he meets Vladimir Putin in Moscow on Monday in the latest western attempt to persuade the Russian leader to “de-escalate” the crisis.

Macron, who has already spoken to Putin by phone three times in the past 10 days, outlined what he called a “realistic” approach to the threat of war as more than 100,000 Russian troops massacred on Ukraine’s borders.

“Russia’s geopolitical aim today is obviously not Ukraine but the clarification of the rules of how Moscow lives with NATO and the EU,” Macron said in an interview on Sunday with Le Journal du Dimanche.

“The security and sovereignty of Ukraine and of any other European nation cannot be compromised in any way, just as it is legitimate for Russia to raise the issue of its own security concerns.”

Macron, who is due to meet Ukraine’s president, Volodymyr Zelensky, in Kyiv on Tuesday said his aim was to prevent a Russian military operation that other western leaders have warned is “imminent”.

“The intensity of the dialogue we have had with Russia and this visit to Moscow are designed to stop that happening,” he said. “Then we will discuss the terms of de-escalation. We have to be very realistic. We will not obtain unilateral gestures, but it is essential to stop the situation deteriorating. “

Russia has denied it has any plans to invade Ukraine. Kremlin spokesman Dmitry Peskov said last week Monday’s talks with the French president would focus on security guarantees that Russia was seeking from the US, NATO and other western allies.

French officials said Macron was in constant communication with US President Joe Biden and other NATO allies and EU partners to ensure a united front over Ukraine, even though he was simultaneously pursuing his goal of a “new European security order” that would give the EU more responsibility for its own security.

Asked whether Macron was too accommodating towards Putin, one senior official in Paris said: “He does not do it on his own behalf or in a manner that is isolated or secret. . . He [Putin] is the one who has made the threats so it’s with him that we must look for de-escalation. ”

Macron’s approach is to build on the “Normandy format” talks between Russia, Ukraine, France and Germany over the Russian-backed separatists in eastern Ukraine. He hopes to achieve de-escalation by encouraging Moscow to pull back its forces and to tone down its cyber warfare campaign aimed at destabilizing Ukraine. In the long-term he wants to forge a new long-term security arrangement for Europe.