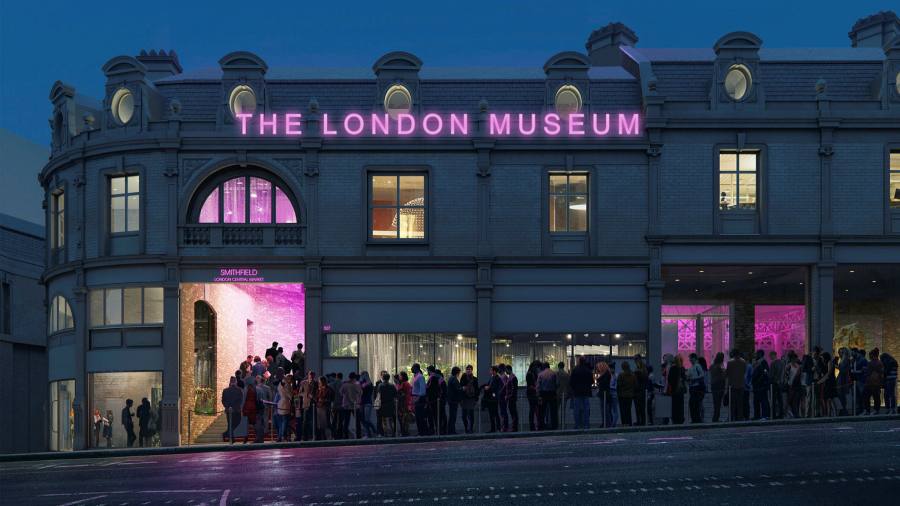 Two thousand years of history will be explored as never before at a newly unveiled Museum of London. But it is the capital’s history that is proving a stumbling block to the £ 337mn project’s timetable, as meat traders at Smithfield market wield a centuries-old law to block access to half the site.

The City of London Corporation, the ancient local authority of the Square Mile, is landlord of the disputed venue where the London Museum – its new name – will eventually have more than double the display space available at its current home in a traffic-blighted corner of the Barbican complex.

Plans for the new venue announced last week detail the ample room to showcase some of the 7mn treasures previously locked away in storerooms, among them the Cheapside Hoard, the world’s greatest collection of Elizabethan and Jacobean jewelery. The new site sits alongside Farringdon station, where the long-delayed Crossrail line is set to deliver a surge in commuters.

The project is one of the biggest and most complex museum developments in Europe. Before the surveyors and architects arrived, little was known about the structure of its new home, the old General Market building at Smithfield, which has a working rail line running through its lower floors and required extensive renovation to make safe.

The plans include moving the contents of the museum’s old building – among them 20,000 skeletons conserved from every era of London’s history – while navigating the fallout from the pandemic. This included inflated construction costs and the lockdown challenges of renovating part of its new site.

The public launch has been bumped from 2022 to 2024, and now to 2026. “We are opening much later than anyone expected,” said Sharon Ament, the museum’s director. “We did not know, and the City did not know, the complexity of the building. When we knocked down a wall, we found a series of vaults running all the way underneath the site that nobody knew about. It was extraordinary. “

But the opening has also been put back by an intractable dispute between the corporation and the meat traders of Smithfield, where livestock has been brought to market since at least the 12th century. The impasse shines a light on the peculiar anachronisms of some of the City’s oldest institutions – and the impact they continue to have on 21st-century development projects.

The redevelopment of the long-vacant General Market building, once a fish-trading center, represents only the first phase of the new museum. In the second stage, the museum will take over the adjacent Poultry Market. But this building is still fully occupied by working traders, some of whom have family links with the meat market going back generations.

One trader who asked not to be named said: “It’s a wonderful place for us to be. People come and visit. We’re in the right place – in the middle of everything. ”

The City authority is backing the museum move with funding of nearly £ 200mn. It is asking the traders, its tenants on the site, to join the two other big London markets – Billingsgate and New Spitalfields – by decamping to a new facility 14 miles to the east at Dagenham Docks. But the Smithfields wholesalers, skilled at striking a bargain, are unhappy with the terms of the deal offered to them. And since the market’s role is protected by royal charter, moving it requires an act of parliament.

Without an agreement between the corporation and the traders, such a bill is unlikely to succeed. That gives the tenants a strong hand in the negotiations, which have now ground on for three and a half years.

The corporation declined to comment on the talks but said it “remains committed” to working with the tenants of all three markets to achieve the move. “We intend to deposit a private bill to the Houses of Parliament later this year for approval to move the markets,” it said in a statement.

Prof Tony Travers, an expert in urban government at the London School of Economics, said: “It’s history struggling with itself. The corporation is operating on the basis of legislation and ways of doing things that are from the premodern era, before the evolution of contemporary government systems. ”

As a result of the deadlock and delays, the museum has had to recast its plans so as to be able to open the first phase to the public in 2026 without, as yet, setting a date for the opening of the later phase. Construction of the museum was originally to be put out as one tender; now, the Poultry Market will be tendered separately.

Ament says the team was working through the impact of delays on construction costs and, more recently, of soaring inflation. “We’ve got a budget and there are pressures on it. [But] we will make it work. ”

The General Market, topped by a vast single-span concrete dome, is turning out to be “magnificent” in its new guise as a museum as it is brought back to life, she said. “Every time I take people around the site, they are just getting blown away.”

As for the stalemate at the neighboring Poultry Market, the team can only wait – primed – for a breakthrough. “We have all of our plans and we’re ready to go. As soon as the deal is done between the City and the market traders, we’ll swoop in. ”