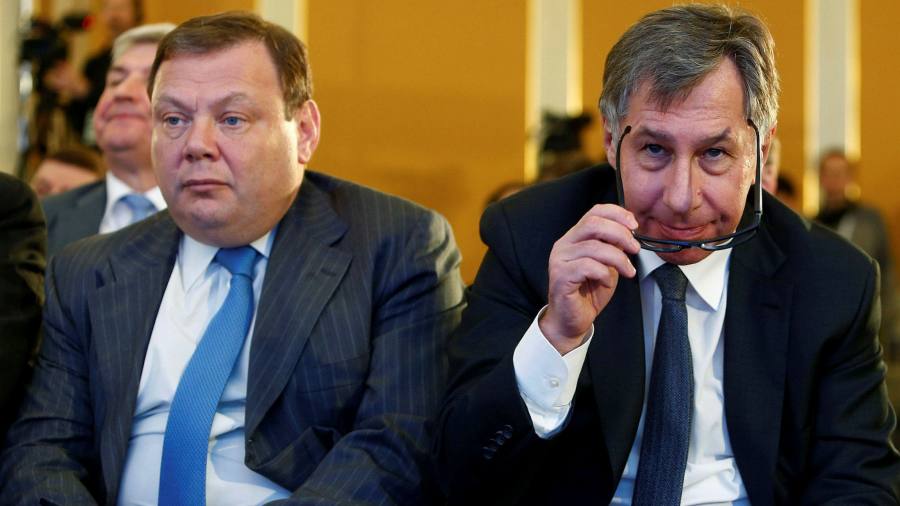 Mikhail Fridman and Petr Aven have stepped down from London-based investment group LetterOne after the EU imposed sanctions on Russian billionaires this week.

LetterOne, set up almost a decade ago after the $ 14bn sale of their stake in oil group TNK-BP to Rosneft, has become a big investor across European energy, retail and telecoms with responsibility for more than 125,000 staff.

Chair Lord Mervyn Davies, a former UK Labor government minister, will take control of the group, with Fridman and Aven resigning from the board.

Davies told the Financial Times that the billionaires had agreed to have no further involvement in the business.

Fridman and Aven together own slightly less than 50 per cent of the group, which means that the company has avoided the sanctions imposed on them as individuals.

Their stakes would be “frozen”, Davies said, with no rights as shareholders or dividends. They would not be able to sell the stakes while under sanctions, he said, while the board had no obligation to give their shareholder rights back once the sanctions lift.

Staff at LetterOne have been told not to talk to the pair, who have been cut off from its buildings along with any access to documents.

In the UK, LetterOne owns high street healthcare retailer Holland & Barrett and has agreed to fund a $ 1bn regional broadband network. In the EU, it owns Spain’s Dia supermarket chain, a stake in telecoms group Turkcell and a large minority position in German energy group Wintershall Dea. It also owns healthcare services in the US.

Davies will work on behalf of the other investors in the group, including Fridman’s partners German Khan and Alexei Kuzmichev, and will look to bring in three new non-executive directors to the board to ensure that it can “carry on as a long-term independent investor ”.

“We have a responsibility to staff and creditors, he said, adding that Fridman and Aven” can not have access to any aspect of this business. It’s the right thing to separate two shareholders who have been sanctioned. ”

Fridman, who also owns a £ 65mn home in London’s Highgate, said this was the “right thing to do for the company”.

The EU on Monday imposed sanctions on the pair for their alleged support of Russian President Vladimir Putin. They both deny the association, and have said that they will take legal action to overturn the measures.

While LetterOne and its various businesses are not directly affected by sanctions, the EU move has meant a reputational risk for the group, particularly as it seeks to do further deals in the UK and EU. Davies said the move would help maintain support for the business from banks and other stakeholders.

Fridman told the Financial Times late last year that the group had a sizeable war chest for new deals, with a particular interest in renewables and telecoms. It held $ 22.3bn in net assets in 2020, with cash of more than $ 4bn.

In Russia Fridman and his partners own the country’s largest privately held lender Alfa-Bank and supermarket chain X5, although these are not part of the LetterOne empire.

The billionaires said on Tuesday they “were deeply disappointed to have been named. . . and are profoundly shocked by the demonstrably false allegations. . . purporting to justify the basis on which they have been sanctioned. ”

The pair said they would contest the “spurious and unfounded basis for the imposition of these sanctions – vigorously and through all means available to them – to reverse unwarranted and unnecessary damage to the livelihoods and prosperity of their many employees, customers, partners and stakeholders, and the businesses that they and their partners have built up over the past 25 years ”.