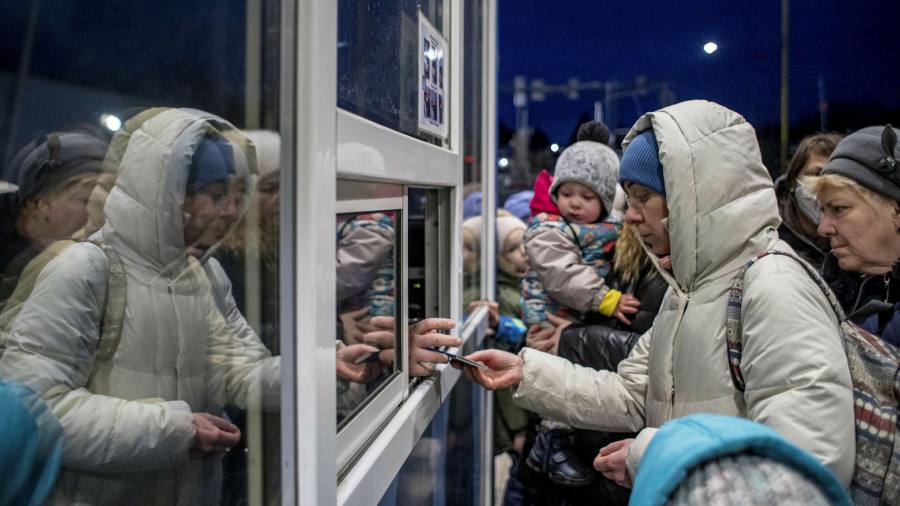 British MPs have demanded that the government make it easier for UK residents to bring family members fleeing Russia’s invasion of Ukraine to join them in Britain.

The Home Office has stopped issuing visas to Ukrainians, other than family members of British citizens who normally live in Ukraine, and they are only issued by a temporary consulate in Lviv, western Ukraine, or at consulates in neighboring Poland, Hungary, Romania or Moldova .

The restrictions mean there is no legal means for the tens of thousands of Ukrainians resident in the UK to bring endangered relatives to Britain.

Without a valid visa, Ukrainians will be barred from boarding flights, trains or ferries to the UK.

Yvette Cooper, shadow home secretary, said the Home Office should ensure Ukrainians with family in the UK could “swiftly” join them “as a top priority”. The department should post staff to neighboring countries and reception centers and “remove bureaucracy and delay,” she said.

Meg Hillier, Labor MP for Hackney South and Shoreditch, which has a significant Ukrainian population, said the government needed to “step up” and make sure that Ukrainians could request visas without visiting a consulate, adding that it should not be necessary for everything to be done at an in-person meeting.

“There are other ways of carrying out checks,” she said.

Stuart McDonald, a Scottish National party MP and member of the Commons home affairs select committee, said Ireland had lifted the requirement for Ukrainian citizens to acquire a visa before coming to the country, while Ukrainians require no visa to enter countries in Europe’s Schengen free- movement zone.

“It’s up to the British government to explain why it can not follow the example of EU countries,” McDonald said. “If people have family members [in Ukraine] why make them jump through any hoops at all? ”

Stella Creasy, Labor MP for Walthamstow, said the current situation felt “like Afghanistan again,” referring to last August when many parliamentarians were overwhelmed with requests for help rescuing relatives when the Taliban swept to power.

One of Creasy’s constituents, Fozan Dar, a UK citizen, ended up trapped in Ukraine because the visa for his Ukrainian wife to travel with him to Britain was not issued until commercial flights from Ukraine had stopped. The couple remain in the country and have been offered no help to leave.

“It’s no good saying we’re standing with the people of Ukraine if we’re not going to stand with our own people in Ukraine and help them get to safety,” Creasy said.

Another Labor MP, Yasmin Qureshi, who represents Bolton South East, which has a longstanding Ukrainian community, has tabled a question for Home Secretary Priti Patel asking her to consider easing the current restrictions on travel to the UK for Ukrainians.

“A lot of them have family and friends here,” she said of the people seeking to leave Ukraine. “If they’re able to come out, there should be something done to help people come here.”

Patel on Thursday said her department stood “shoulder to shoulder” with Ukraine following the Russian invasion and announced that she was waiving application fees for visas for Ukrainian citizens seeking to join family residents in the UK under family reunification rules.

The department announced five special concessions for Ukrainians currently in the UK, including the right to extend seasonal worker visas – normally restricted to six months – until December this year.

The department did not immediately respond to questions about the visa restrictions for Ukrainian citizens.