NATO will have to strengthen its defenses in eastern Europe after Russia’s invasion of Ukraine and the risk that Belarus will host nuclear weapons and Russian troops, according to France and the Baltic states.

Alexander Lukashenko, the Belarus dictator, has over the past two years closely allied himself with Russia’s Vladimir Putin and allowed the country to be used as one of the launching pads for the invasion of Ukraine this week. Belarus is sandwiched between Russia to the east and Ukraine to the south, while to the north and west are the Nato members of Poland and the Baltic states.

Belarus is also holding a referendum this weekend on future constitutional arrangements. French foreign minister Jean-Yves Le Drian said on Friday that the referendum – conducted without democratic oversight – could end Belarus’s status as a neutral state free of nuclear weapons.

“Belarus also says it is prepared to permanently host Russian military forces,” Le Drian said in a statement. “We and our partners will have to draw all the consequences of this situation in the adaptation of NATO’s defense posture.”

Latvia, Lithuania, Estonia and Poland called on Thursday for immediate consultations at NATO under the organization’s Article 4, which allies can invoke whenever “the territorial integrity, political independence or security of any of the parties is threatened”. These concerns were discussed by NATO leaders at a crisis summit on Friday.

Jens Stoltenberg, NATO secretary-general, said: “Russia is the aggressor, and Belarus is the enabler.”

Belarus’s strategic value to Moscow has been shown this week as Russian troops deployed there staged an assault on Kyiv, reaching the city’s suburbs within 24 hours. 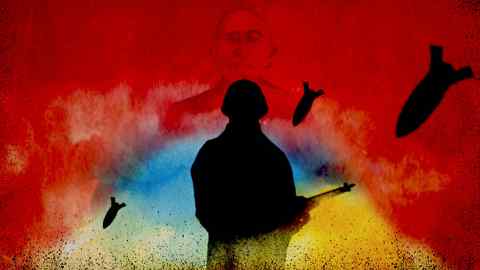 When a critical Kyiv airport taken by Russia was recaptured by Ukrainian special forces, Moscow instead diverted incoming airborne deployments to a Belarusian airfield to travel south by land.

Ingrida Simonyte, Lithuania’s prime minister, told the Financial Times that the situation in Ukraine and Belarus was “a complete game-changer for the European security situation”.

We think there will be a need to rethink the whole security situation if these Russian troops and weapons are here to stay [in Belarus] as they appear, ”she said.

Edgars Rinkevics, Latvian foreign minister, told a news conference on Friday: “We need to treat the Belarus and Russia border as one, as this is now one long border. . . Russia and its vassal country Belarus [means] we will need to divert resources [to invest in defending] that border that could be invested in education and health but this is a necessary investment. ”

Le Drian on Friday met Sviatlana Tsikhanouskaya, the Belarus opposition leader, and said France and its EU partners were determined to help the country’s democratic forces.

“If Russia controls Ukraine and Belarus then all of a sudden the NATO-Russia border jumps from around 1,300km to [around] 3,700km: and that requires a huge amount of planning about how you would manage that situation, ”said a western defense official.