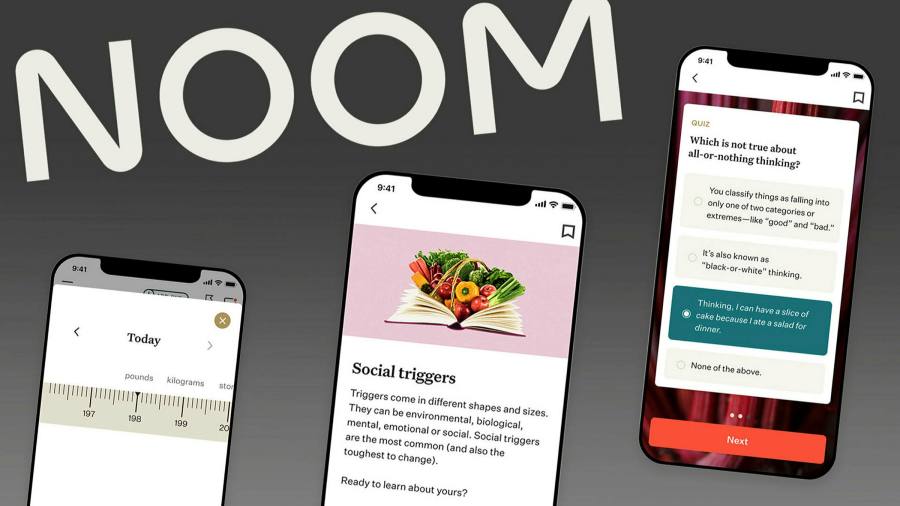 During the two years that Taylor worked at Noom, a New York-based wellness start-up that has secured funding from leading tech investors such as Silver Lake and Sequoia Capital, she received alarming messages from clients trying to lose weight through its app.

Some of those messages read: “I’m bulimic”, “I binge-eat” and “I hate myself”.

“I did not feel prepared because I am not a mental health counselor or a registered dietitian,” said Taylor, who is not her real name. “I could not handle that properly.”

She is among a number of “health coaches” who have worked at Noom that spoke to the Financial Times under the condition of anonymity. They wanted to raise concerns that the weight loss app’s design and the company’s policies could lead vulnerable users to harm.

When presented with these concerns, Artem Petakov, Noom’s president and co-founder, acknowledged the company needed to tackle the problem.

“Whenever I hear about these issues, it really hurts. I want to fix all of them. . . and we are innovating as fast as we possibly can, ”he said. Petakov added that the company’s “North Star” is to “save as many lives as possible”.

Noom markets itself as a platform for sustainable weight loss through applying the psychological framework of cognitive behavioral therapy and offering one-to-one support from a health coach. Founded in 2008, the company grew rapidly during the pandemic, a time when many complained of weight gain following global lockdowns.

Its latest investment round in May last year, led by Silver Lake with participation from Sequoia Capital, raised $ 540mn, bringing its valuation to $ 4.2bn, according to PitchBook. It is reportedly seeking an initial public offering this year, which the company declined to comment on. Silver Lake declined to comment and Sequoia did not immediately respond to requests for comment.

Users fill in a 10-minute survey that is fed into an algorithm – combined with data from other Noom users – to generate a personalized diet plan, including a daily calorie goal, reading on psychological theory and a timeframe for weight loss.

The onboarding survey asks if the user has an eating disorder and if they select yes they are not allowed to continue. When coaches escalate potentially vulnerable users, Noom said it had clinical oversight and removed about 0.1 percent of these cases from the platform, directing them to resources for support.

But one former health coach said: “I do not think their processes are diligent enough to protect their users.”

When Taylor flagged cases she was worried about, she claims she was told to “coach around the problem”, rather than advise the client to seek medical help or offer a refund. “[Noom] would say ‘do not kick them off the platform yet’, ”she added.

Coaches said that female clients in particular were given calorie targets that were “unhealthy”, “restrictive” and “unrealistic”.

The UK’s NHS generally recommends women eat 2,000 calories a day and reduce this by 500-600 calories to lose weight healthily. Noom’s previous minimum calorie allowance was 1,200 for women, but this was raised by 10 per cent in November, based on user feedback.

“Many of the budgets come up quite low because people have a particular goal in mind and they want to be quite aggressive and we want to let them be in control,” Petakov said, adding that the calculations were made using safe and effective scientific methods .

When the FT tested the platform as a woman, it was given a calorie count of 1,320 to lose 5kg at a “medium” pace. There are no warnings when a user logs just a few hundred calories a day, unlike rival platform MyFitnessPal which prevents users from saving results if they are undereating.

Taylor said she could manually review individual profiles to check calories, but her caseload was so high she rarely had time for this.

Noom has 3,000 health coaches worldwide that are assigned to hundreds of clients at a time and expected to respond to messages within 48 hours using the in-app service. Some coaches said they were overworked, with targets of up to 100 interactions a day.

“It’s exhausting, you can not spend the time giving the user what they deserve in terms of a response,” one former Noom coach said.

Taylor was eventually fired after the company said she had not met her targets. “I still worry about those users now,” she said. “I felt disposable and Noom did not care.”

Noom said performance reviews were conducted for employees who consistently underperformed. There were former employees for whom Noom was not a good fit, but work-related happiness remained above 80 per cent based on employee surveys, the company added.

Health coaches undergo a 75-hour training program called “Noomiversity”, covering psychological theory and communicating with users, based on scripted messages from a guidebook called “Guru”. They do not need any health-related qualifications.

The majority of Noom’s coaches and users are based in the US, with the UK being its second-largest market. Last year, Noom hired about 15 health coaches in the UK on fixed-term contracts as an experiment to see if it improved the user experience. The group were told over a video call that their contracts would not be renewed after asking for better working rights, one UK contractor said.

Noom said the jobs were explicitly temporary roles that were properly classified and after assessing the market the company decided not to renew the contracts.

Salaries for permanent coaches were equivalent to the US minimum wage, said people with knowledge of worker pay at Noom.

“We’re trying hard to figure out how to make the program affordable and balance that with wages,” said Petakov.