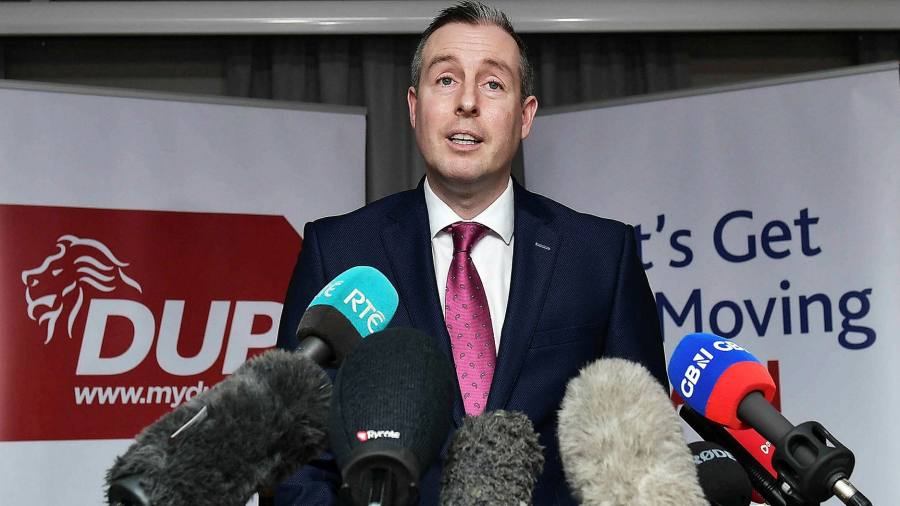 The move, which came as a dispute erupted over border checks on agriculture and foods entering Northern Ireland from Britain, torpedoed the region’s power-sharing executive and prompted calls from the nationalist Sinn Féin party for a vote to be called immediately.

“Our institutions are once again being tested,” Givan, who belongs to the Democratic Unionist party, said in Belfast. “It is my earnest desire that all sections of the community will soon be able to give consent to the restoration of a fully functioning executive through a resolution of the issues that have regrettably brought us to this point.”

“Now is the moment we say enough,” echoed DUP leader Sir Jeffrey Donaldson, who insisted that Brexit rules were costing Northern Ireland £ 2.5mn a day. He said the resignation would put “maximum leverage on the EU to bring sensible solutions. . . what we need is not words, it’s action ”.

Mary Lou MacDonald, leader of Sinn Féin, which polls show is on course to win the next election in Northern Ireland, said the executive could not be allowed to “stagger on. . . Early elections must be called. ” A vote is currently due on May 5.

But London appeared to reject that prospect. Brandon Lewis, secretary of state for Northern Ireland, called the resignation “disappointing”. “I urge them to reinstate the first minister immediately. . . We must not return to a state of political deadlock and inertia, ”he said in a statement.

Opponents dismissed the DUP’s move as an electoral stunt to increase pressure on the UK government as it negotiates with the EU to ease trade frictions stemming from post-Brexit arrangements,

The long-running negotiations between London and Brussels continued on Thursday. Brexit left Northern Ireland within the EU single market in order to avoid restoring a hard trade border on the island of Ireland, but under the so-called Northern Ireland protocol, it put a customs border in the Irish Sea instead.

Donaldson, who argues that the protocol undermines Northern Ireland’s status within the UK, said that “without resolute action on our part, these talks could drift on for many more months, even years”.

Givan’s exit automatically triggers that of Michelle O’Neill, Sinn Féin deputy prime minister. Other ministers will remain in place to implement previously agreed policy but can take no new decisions – leaving the budget and other measures in limbo. His departure came hours after the DUP agriculture minister, Edwin Poots, ordered a halt to agricultural checks on goods entering the region. But officials and hauliers said checks were continuing on Thursday while officials took legal advice.

Doug Beattie, head of the Ulster Unionist party, called the collapse of the executive a “manufactured crisis. . . brought about by party-political interests ”that was“ absolutely crazy ”for unionism.

“This smacks of desperation,” said Deirdre Heenan, a professor at Ulster University, who noted that every other DUP attempt to get rid of the protocol had failed. After months of threatening to pull down Stormont unless Irish Sea customs checks were scrapped, it had to deliver something to its supporters ahead of the election, she said.

Although Poots’ decision is in conflict with the EU Withdrawal Agreement, George Eustice, UK secretary of state for environment, food and rural affairs, on Thursday told the House of Commons that it was “entirely unnecessary at this stage” for the UK government to intervene.

“The protocol was signed into international law by the UK government, and now they are bystanders as their deal falls apart – pathetically claiming it’s everyone else’s responsibility,” Peter Kyle, shadow Northern Ireland secretary, told MPs.

Maros Sefcovic, EU Brexit negotiator, said the order to halt agricultural checks was “very unhelpful” and reminded the UK to abide by a deal it signed.