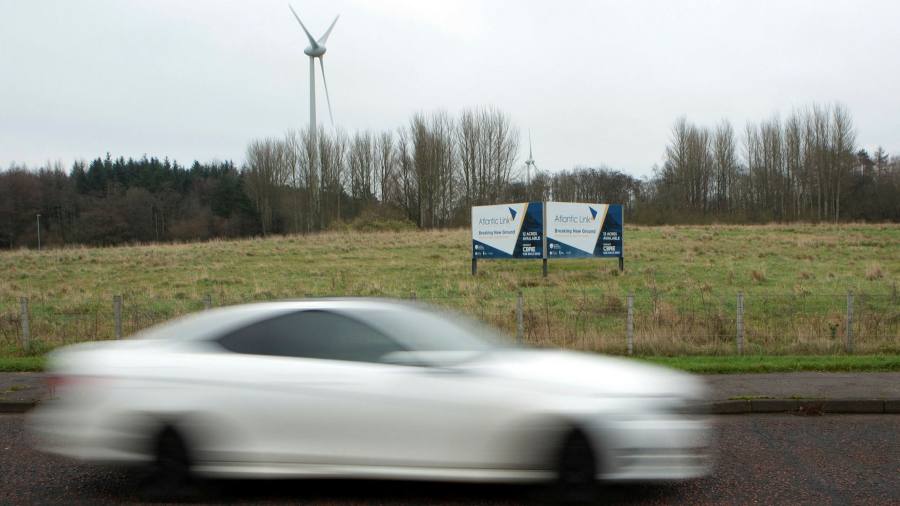 Adjacent to the field is an unremarkable building that looks like a small warehouse. A couple of wind turbines nearby rotate in the chilly air. Over the road, sheep graze in a field.

This is Northern Ireland’s only enterprise zone – a special development area offering tax breaks to reel in digital, innovation or light manufacturing companies. Its unique selling point is its proximity to a super fast transatlantic data cable, making the site ideal for high-tech companies looking to locate in one of the cheapest corners of the UK.

But Atlantic Link has only one tenant. Prescient Data Centers, which occupies the solitary blue and gray warehouse-like construction, has invested £ 7mn. But it takes up just 5 acres; the other 12 acres of the site into which the local council has sunk £ 3mn are still undeveloped.

“We are sitting on infrastructure and investment that gives us opportunities for growth in the future,” says Richard Baker, director of development and leisure at the Causeway Coast and Glens council. He says he is in promising talks with two possible new investors, that an innovation hub on the site is being considered and an estate agent has recently been hired to try to kick start development.

But the current reality is that Atlantic Link is a sad embodiment of a region punching below its potential.

The Troubles, three decades of conflict that alienated investment, ended a quarter of a century ago but Northern Ireland still badly lags the rest of the UK in terms of growth and productivity. The region is significantly poorer, with income per head about 25 per cent below the UK overall.

It has made improvements to the business environment and physical infrastructure and the UK government, in partnership with Northern Ireland’s executive, has recently announced a joint investment plan, expected to exceed £ 1bn, that London says will attract investment in life sciences, digital industries and advanced manufacturing and create 20,000 jobs.

But as Richard Johnston, assistant director of the Ulster University Economic Policy Center, told a seminar: “Northern Ireland is improving in many areas. But other nations are improving more rapidly. ”

Instability – coming from local politics, Brexit and Covid-19 – has also hobbled progress. One legacy of the 1998 peace accord was a power-sharing executive, but it has proved fractious.

The executive collapsed between 2017-20 and one of the parties in it, the Democratic Unionist party, this month withdrew its first minister in protest at the post-Brexit trading arrangements.

The move effectively stymies the executive until after elections in May – a vote that could deliver a body blow to pro-UK unionist parties if, as expected, the nationalist Sinn Féin party comes out on top. And there is no guarantee it will resume then: the DUP has ruled out returning to Stormont unless its Brexit demands are met.

Politicians in Northern Ireland, London and Brussels have been haggling for months, with no end in sight, over the post-Brexit trading arrangements that put a customs border down the Irish Sea and leave the region in both the UK internal market and the EU single market for goods.

Some politicians and business people argue that to take advantage of such a win-win trading, the rules, known as the Northern Ireland Protocol, need to be tweaked.

But analysts say the problems go deeper. Northern Ireland’s economy has bounced back from Covid-19 faster than the rest of the UK so far, and there have been recent big investments.

But Northern Ireland’s productivity shrank by nearly 3 per cent in 2019, the latest available data, the worst of anywhere in the UK, and gross value added per hour worked has been the worst nearly every year since 2004.

Public spending per head is about 20 per cent higher in Northern Ireland than in the UK as a whole but expenditure on transport, science and technology – key drivers of productivity – are the lowest, noted the Fiscal Commission for Northern Ireland, an independent body that is examining whether the region should have more powers to raise taxes. Northern Ireland also has a significant jobs gap and exports many of its brightest talents to the UK.

“There is no short-term easy fix, absolutely not,” said Neil Collins, managing director of Wright Bus, one of the region’s business success stories. “We need the education system to be agile enough to supply the skillsets we need.”

Wrightbus, which crashed into receivership in 2019 with the loss of 1,200 jobs, has reinvented itself as a hydrogen-powered double decker bus pioneer since being bought a month after its collapse by JCB heir Jo Bamford. Collins says it now needs more electricians and software specialists than diesel fitters.

David Jordan, a research fellow at Queen’s University, said education, infrastructure and attracting investment all went hand-in-hand. “If you want an economic revolution for Northern Ireland, there needs to be more than a few new investors. So many areas need to be addressed, ”he said.

Reversing the brain drain would be a good start, said Ann Watt, director of think-tank Pivotal.

“The economy struggles due to a low skills base and low productivity. By both keeping more young people here, and encouraging more of those who do leave to return, local politicians can go a long way to addressing this economic weakness, ”she said in a report.

The challenges are huge but people in Northern Ireland – for whom life is immeasurably better since the end of the Troubles – are the UK’s happiest people, according to research by Lloyds Bank.

At the Atlantic Link site, Baker is upbeat. “Covid is going to work to our advantage,” he said, citing the shift to remote working that high-speed data connectivity will enable. “We are still very optimistic.”