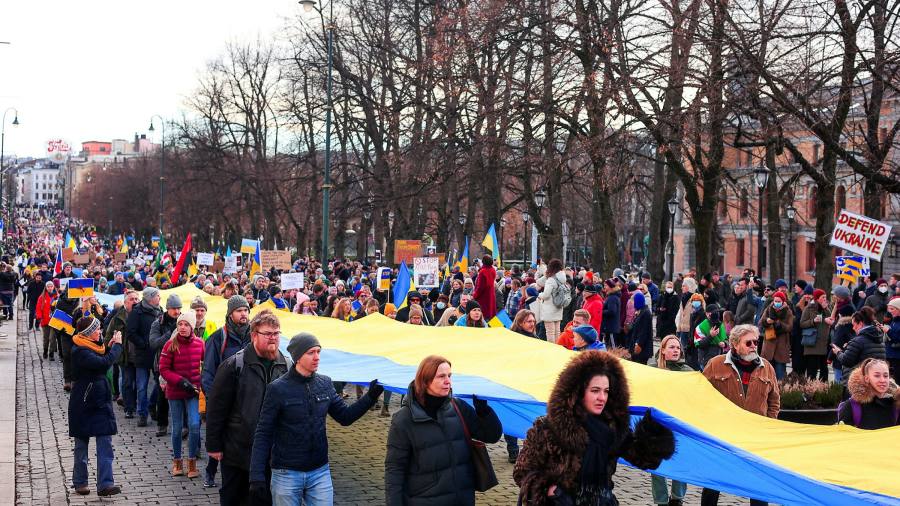 Norway’s $ 1.3tn oil fund will dump its Russian investments as part of a wider package of support for Ukraine, highlighting how the international financial pressure on Moscow is being ratcheted up.

Norges Bank Investment Management, the sovereign wealth fund housed inside Norway’s central bank, has been instructed to immediately freeze all new investments in Russia and to begin to unwind its existing $ 3bn worth of Russian holdings, according to a statement from the Norwegian government on Sunday evening.

“Russia’s attack on Ukraine has challenged Europe’s security in a way we have not seen since the second world war,” said Jonas Gahr Støre, Norway’s prime minister. “It challenges our norms, our values ​​and the principles that our democratic society is based on.”

The fund – the world’s largest sovereign wealth investor – held NKr27bn ($ 3.1bn) in shares in the country at the end of 2021, according to a spokesperson. That equates to 0.2 per cent of NBIM’s total of assets under management.

“We will implement the decisions made by the Norwegian government and now freeze the fund’s investments in Russia, meaning we will neither buy nor sell shares,” NBIM said in a statement to the Financial Times. “Together with the Ministry of Finance, we will prepare a plan to divest from the Russian market.”

Nicolai Tangen, the state fund’s chief executive and a former hedge fund manager, had earlier this week indicated that he thought divesting from Russia altogether was a bad idea.

“This is obviously a dilemma, but selling out of a market is not black-or-white,” he told a local newspaper. “The Moscow stock exchange has fallen markedly in recent days, and if we sell our stocks now, Russian oligarchs would be able to buy these on the cheap.”

“Given how the situation has developed, we consider it necessary to pull the fund out of Russia,” Trygve Slagsvold Vedum, the Norwegian finance minister, said in a statement.

The government also said it would allocate up to two billion kroner for humanitarian aid to Ukraine, and will also provide military equipment such as helmets and protective vests. Norway has so far given 250mn kroner in humanitarian aid as a result of Russia’s attack on Ukraine, it said, mainly to the UN High Commissioner for Refugees, the Red Cross and the UN Humanitarian Land Fund.

Russia’s acts of war lead to great civilian casualties, destroy basic infrastructure and drive people into exile. We are therefore increasing our humanitarian aid in connection with the Ukraine crisis, ”said Gahr Støre.

Norway said that sanctions will also isolate Russia financially “by hitting the central bank and taking a number of Russian banks out of the Swift payment system”. Norwegian airspace will also be closed to Russian flights.

Ukraine hospitals could run out of oxygen supplies in 24 hours, WHO says