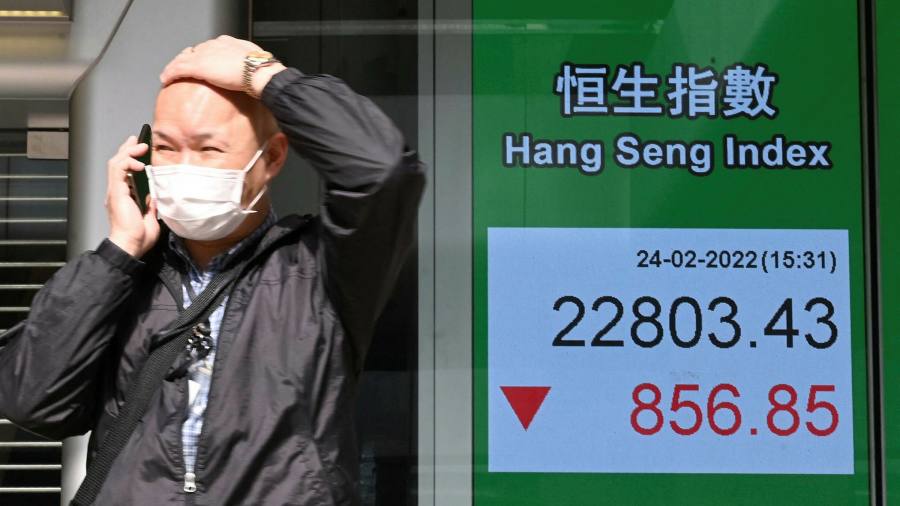 Oil prices climbed back above $ 100 and shares in Asia edged higher on Friday after a day of volatile trading on Wall Street, as investors grappled with the fallout from Russia’s invasion of Ukraine.

Brent had surged to almost $ 106 on Thursday as explosions rocked Kyiv but had settled at $ 99.08 after US President Joe Biden revealed new sanctions against Russia that spared energy exports.

In Asia, Hong Kong’s benchmark Hang Seng index rose 0.4 per cent after closing the previous session down more than 3 per cent. Japan’s Topix index was also up 0.7 per cent and in Australia the S & P / ASX 200 gained 0.5 per cent.

Oil prices climbed after a day of volatility on Wall Street, where the S&P 500 fell as much as 2.6 per cent before closing 1.5 per cent higher. Traders in New York attributed the swing to hedge funds unwinding bets that stocks would fall in response to the outbreak of war as they.

Hedge funds were seeking to reduce exposure in response to heightened market volatility, the traders said, covering their short positions by buying the underlying stocks or exchange traded funds and providing a slight boost to the broader market in the process.

“It’s short cover,” said Andy Maynard, a trader at investment bank China Renaissance. “They have not got anything to sustain the buying. . . this is definitely not bottom fishing. ”

The head of another brokerage warned that even after short covering on Friday in Hong Kong, there was “still quite a big short position being carried forward” as markets braced for more disruption caused by the invasion.

In China, where officials have voiced strong support for Russian President Vladimir Putin’s invasion and short-selling of individual stocks is forbidden, the CSI 300 index of Shanghai- and Shenzhen-listed shares rose 1.7 per cent after finishing the previous session 2 per cent lower .

Global investors continued to dump risky assets such as stocks in favor of ports, with gold rising 0.6 per cent to $ 1,914.85 per troy ounce.

The US dollar was steady after notching gains on Thursday as European currencies, including the euro and sterling sold off, with the dollar index off about 0.1 per cent on Friday at 96.99.

The corporate fallout from Russia’s invasion of Ukraine


Putin has brought conventional, bloody warfare back to Europe