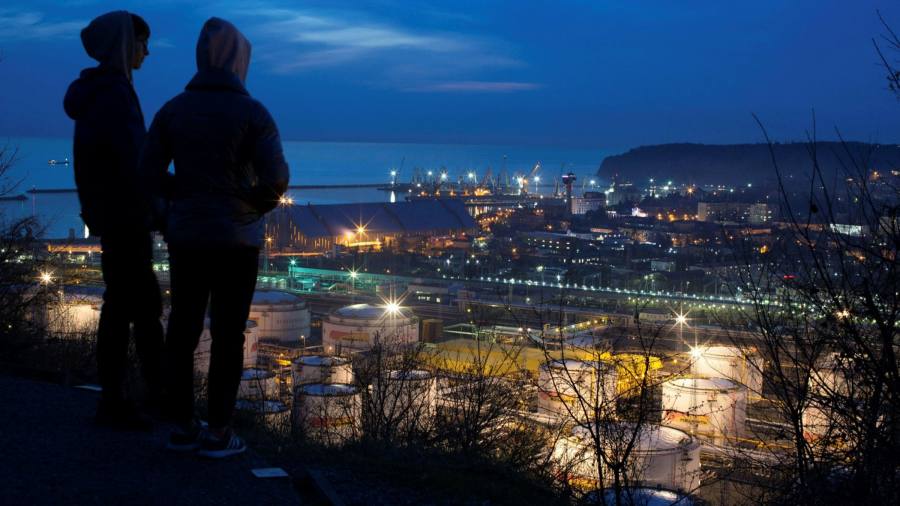 Some of the world’s biggest oil companies and commodity traders are at risk of disruption to their extensive business operations in Russia if the west follows through with “unprecedented” sanctions against Moscow for any further invasion of Ukraine.

The US has emphasized measures that would target Russia’s financial sector and members of President Vlaldimir Putin’s inner circle, rather than sanctions that would directly disrupt supplies of Russian oil and gas into Europe and potentially push elevated energy prices even higher.

However, the G7’s threat of financial and economic sanctions on “a wide array of sectoral and individual targets” could still hit oil companies such as BP, Shell and ExxonMobil, and commodity traders such as Glencore, Vitol and Trafigura, which all have important business relationships in the country.

“Extensive sanctions would be really problematic for the energy sector, even if they do not directly target exports,” said Livia Paggi, head of political risk at GPW consultancy.

Russia’s energy industry is so vast and the involvement of Putin’s allies so pervasive that new sanctions would, at a minimum, force western companies “to down tools while they worked out their exposure”.

Trafigura and Vitol both have stakes in a controversial Arctic oil project run by Rosneft, and are big traders of Russian oil. Geneva-based Gunvor also lifts Russian crude while Glencore owns 10.55 per cent of EN +, the hydropower and metals group formerly controlled by Russian oligarch Oleg Deripaska, as well as a small stake in Rosneft.

The state-backed oil producer has been under US and EU sanctions since 2014 when Russia annexed Crimea from Ukraine.

The measures were designed to ensure Rosneft could still export oil and gas but stymie its future growth. It did that by blocking the energy producer’s access to western financing with a maturity longer than 90 days, and its access to technology and personnel needed for certain exploration activities.

Rosneft chief executive Igor Sechin was also targeted with individual sanctions that prevent US nationals or entities from dealing with him.

As a result, BP, for example, was still able to collect $ 2.4bn in dividends from Rosneft last year and chief executive Bernard Looney has continued to sit on the Rosneft board.

Brian O’Toole, a former sanctions expert at the US Treasury’s Office of Foreign Assets Control, said the thrust of any new energy-related sanctions was likely to be similar, and that “any significant sanctions on Gazprom and Rosneft that affect the current supply ”Were unlikely.

Instead, sanctions might target midstream infrastructure such as pipelines or downstream businesses such as Russian trading houses, O’Toole added. “Things like that may be more palatable and might not have an impact on current production but would send something of a message that the energy sector is not completely untouchable.”

US President Joe Biden last week suggested the most severe sanctions would target Russia’s largest financial institutions. Such measures – like eventually blocking Russia from international payments network Swift – would be unlikely to prevent western companies from taking or making payment for energy supplies but would make it more difficult for groups such as BP or Shell to operate, said O’Toole, now a non-resident senior fellow at the Atlantic Council think-tank in Washington.

Helima Croft, global head of commodity strategy at RBC Capital Markets, said the Biden administration continued to stress it would not directly target Russian energy exports but that some measures under consideration could make it “challenging” for international oil companies. “These measures are apparently not at the top of the implementation list but could be included in the second or third round of punitive measures,” she said in a note.

BP, Shell and Exxon declined to comment. In an interview with the FT this month, Looney said BP would only worry about new sanctions if and when they materialized. “Let’s see what happens. There are sanctions today, we comply with sanctions and we will continue to do so. ”

Trafigura, Vitol, Glencore and Gunvor all declined to comment.

In 2018, when the US imposed sanctions on Deripaska and his aluminum companies Rusal and En + it threw metal markets into chaos and caused significant supply chain disruptions.

Rusal, in which Glencore then held a 9 per cent stake, was blacklisted by financial institutions, creating huge problems for European companies and sending the price of aluminum on the London Metal Exchange up by a third.

Russia is also a key producer of palladium, which carmakers use to remove toxic emissions from exhaust fumes, as well as platinum, copper and nickel, a key battery material.

The biggest risk to commodity markets, however, would come not from the sanctions but from how Russia might retaliate, RBC’s Croft told the Financial Times.

“There is broad concern about the weaponization of commodities by Russia in response to potentially facing the most onerous sanctions to date,” she said. Given an already tight market, with gas at record levels and oil trading above $ 90 a barrel for the first time in seven years, any move by Russia to hold back supply would send prices even higher.

Christine Lindner, Germany’s finance minister, warned the FT last week that the Kremlin could retaliate by reducing or even stopping gas flows to Europe. Russia supplies Europe with about 40 per cent of its gas.

It is also the world’s third-largest oil producer, behind the US and Saudi Arabia, pumping roughly 10mn barrels a day last year, approximately 10 per cent of global output.

“There is very little the west can do in terms of sanctions,” GPW’s Paggi said, “that does not directly harm their direct commercial interests.”