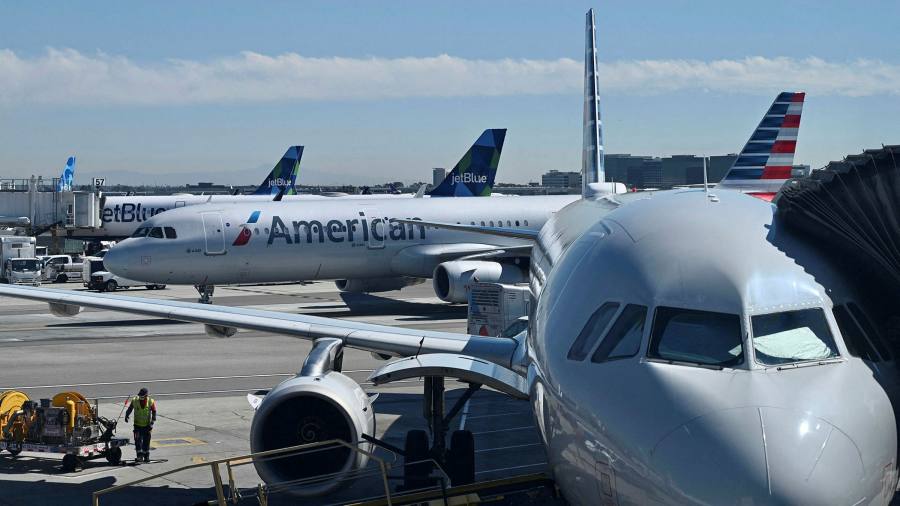 Investors are racing to cut their exposure to oil dependent industries, as the highest crude price in more than a decade raises fears for the global economy and deals a fresh blow to sectors that were only just emerging from the pandemic.

Russia’s invasion of Ukraine has unleashed turmoil across commodity markets, sending Brent crude oil to levels not seen since shortly before the 2008 financial crisis and driving European gas prices to new highs.

The prospect that energy prices could leap even higher if other countries were to follow the US in imposing an oil embargo on Russia – and the Kremlin were to retaliate by turning off its own supply of crude and gas – has left financial markets on edge.

Companies caught in investors’ crosshairs stretch from airlines to those that rely on oil for their manufacturing processes. American Airlines has been hit hard, with its shares down by almost a fifth this month and its debt among the worst performers in the junk bond market.

Low-cost carrier Wizz Air is one of the European carriers that has been shunned most by investors, while the yield on Delta Air Lines’ $ 600mn bond maturing in 2029 has soared to a level not seen since the coronavirus pandemic devastated the airline industry. The shares and bonds of tire manufacturer Goodyear Tire & Rubber have also been punished.

The international oil benchmark Brent crude spiked to almost $ 140 at the start of last week, only a few dollars shy of the record set in July 2008. It settled at $ 112.67 per barrel on Friday, leaving it up 60 per cent over the past 12 months .

“Given Russia’s key role in global energy supply, the global economy could soon be faced with one of the largest energy supply shocks ever,” noted economists at Goldman Sachs, which forecasts that crude could hit $ 175 a barrel.

Although the violent spiking in commodity prices had eased by the end of last week, economists and analysts have warned that the threat to the health of companies and major economies will increase if energy prices remain at an elevated level.

“This is an emergency,” said John Hess, head of Hess Corp., one of the largest U.S. oil producers, echoing warnings from groups such as Occidental Petroleum and Pioneer Natural Resources. Petrol prices in the US, the world’s largest petroleum market, have already set record highs and analysts expect them to keep rising.

European Central Bank President Christine Lagarde last week warned that the invasion of Ukraine had created “a major shock” for the eurozone economy, as the central bank predicted higher inflation and lower growth over the next three years.

European companies are already being hit by the surge in the price of gas, which Russia counts as one of its major exports. Czech group Draslovka, the world’s biggest maker of sodium cyanide, revealed this weekend that it had been forced to suspend production in Europe because of the price rise.

The spike in oil has so far compounded the challenge facing the Federal Reserve, which was already trying to rein in inflation and is expected to raise interest rates this week despite the turmoil following the invasion.

However, concern is rising on Wall Street that higher energy costs will ultimately hit consumers and squeeze US companies. Economists at Goldman Sachs and Wells Fargo last week cut their growth forecasts for the US economy.

Oleg Melentyev, a credit analyst at Bank of America, said that a sustained run above the $ 125 per barrel would be damaging.

“Credit stress could increase, credit spreads could widen, it could even be a credit crunch if we go way above that level to $ 150 per barrel,” he said. “You could have conditions that credit markets essentially seize up.”


How to puncture Russia’s disinformation bubble