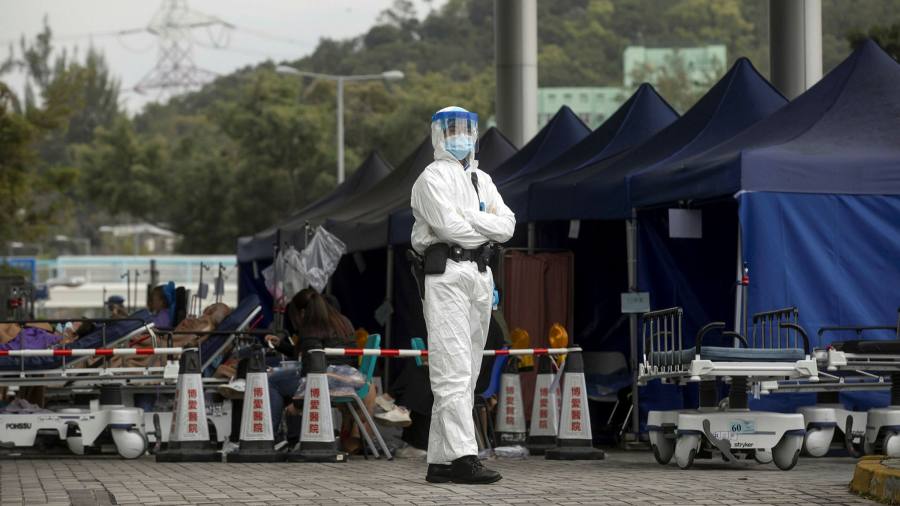 The conflict between preserving Hong Kong’s status as a leading financial center and Xi Jinping’s insistence on a nationwide “zero covid” strategy has been strongly illustrated this week, as the Chinese president instructed the territory’s government to rein in China’s worst outbreak in more than two years at any cost.

During a week in which Beijing had hoped the rest of the world would be transfixed by athletic brilliance at the Winter Olympics, which have been an organizational triumph for the host nation, there have instead been competing images of elderly patients lying in beds outside swamped Hong King hospitals.

With cases of the Omicron coronavirus variant spreading rapidly, the Hong Kong government reported 6,116 new cases on Thursday, bringing the total to more than 16,000 over the past month. Before this outbreak, the city had recorded about 12,600 cases by late December.

Some experts argue that the distressing scenes stem in part from China’s insistence on eradicating outbreaks by isolating all positive cases in hospitals and quarantine centers, even if people have only mild symptoms or are asymptomatic.

But Chinese government policy advisers and pro-Beijing figures in Hong Kong felt there was little chance that Xi would relent, further delaying the day when the territory can restore quarantine-free travel with the outside world.

Carrie Lam, Hong Kong’s chief executive, revealed on Thursday that she was weighing unprecedented mandatory, citywide Covid testing for the territory’s 7.4mn residents with help from the mainland government.

“The reality is that there are very few severe cases,” said Jin Dong-yan, an epidemiologist at the University of Hong Kong. “Logically, it should not cause a big run on our medical facilities, but [it does] if you take in all patients. Hospitals should primarily admit the elderly, pregnant women and children. ”

Siddharth Sridhar, a virologist also at HKU, has likened local hospitals to “sandcastles in a tsunami”.

Chinese authorities, however, fear that failure of its zero-covid strategy in Hong Kong could jeopardize their success in suppressing the virus across the rest of the country over the past two years.

“If [Hong Kong] lives with the virus, [Beijing] would definitely be concerned about whether the virus would spread into the mainland, ”said Tam Yiu-chung, Hong Kong’s most senior representative in China’s parliament, the National People’s Congress.

As a result, Xi had directed officials in the central government and China’s southern Guangdong province to help Hong Kong replicate their success in building as many quarantine facilities as needed.

Regina Ip, a pro-Beijing lawmaker and member of the council that advises Lam, said there was little chance Beijing would deviate from the strategy. “They are determined to help us return to zero,” she said.

Returning to zero cases, however, may no longer be possible, according to some health experts. The last time China confronted a citywide epidemic with daily case counts as high as Hong Kong’s – in Wuhan in January 2020 – it enforced an uncompromising lockdown that lasted for months. When Xi’an followed a similar strategy this year, it did so when its case count stood in the hundreds not thousands, let alone tens of thousands.

“You can not close down Hong Kong, you have to accept reality,” said Jin. He argued that the territory should now be allowed to live with the virus and reopen international travel even if that meant keeping the border with China closed indefinitely.

“If Hong Kong can connect with the world [after reducing the outbreak] to a low level, then it can walk a path for China’s future opening-up. ”

Pro-Beijing figures in the territory said that Xi’s administration would not be swayed by such arguments, even as more and more companies temporarily relocate executives outside of the territory.

Michael Tien, a prominent Hong Kong business figure and pro-Beijing legislator, counts that companies are withdrawing executives because they need to travel to other countries in the region rather than China, which enforces two or three-week quarantines on all arrivals.

“Westerners are complaining like hell [and] might end up moving their headquarters elsewhere, but for those who do business in China it makes no difference, ”he said.

Even if Lam could get permission from Xi to let Hong Kong live with the virus and gradually restore international travel links before those into China, low vaccination rates for the territory’s most vulnerable populations make it a risky strategy. This, along with an inadequate testing and quarantine infrastructure, has left Hong Kong dangerously exposed during the outbreak.

Both mainland China and regional rival Singapore have managed far more successful vaccination campaigns, with the latter having fully vaccinated more than 90 per cent of its eligible population. In Hong Kong, by contrast, less than 30 per cent of people aged 80 or older have received two shots.

Tam, the senior representative to China’s parliament, hopes the latest measures will offer Hong Kong an escape from its predicament without having to enforce a Wuhan or Xi’an-style clampdown.

“Could we screen all residents on Hong Kong Island followed by Kowloon and the New Territories?” he said, referring to the city’s three big administrative areas. “That might be a way out.”

But if it is not, one veteran member of Hong Kong’s pro-Beijing camp, who asked not to be named, predicted that Xi would not hesitate to take more drastic measures to eradicate the outbreak and restore the territory to near-zero Covid levels. “Do not,” he said, “underestimate the Communist party’s determination.”