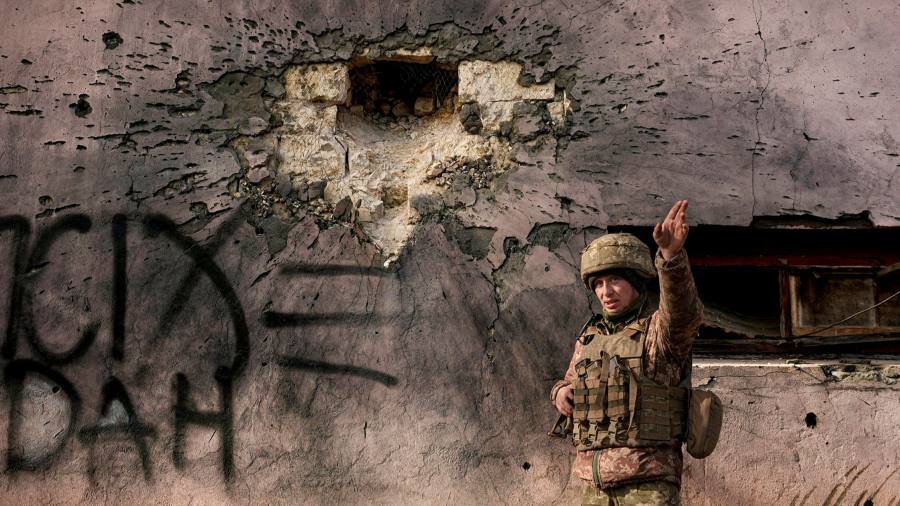 On both sides of the eastern Ukrainian frontline, ravaged by a bloody eight-year stand-off between government forces and Moscow-backed separatists, residents are bracing themselves for the coming of an even more violent turn in the conflict.

The Ukrainian army says it has witnessed the heaviest shelling in years, marking the most serious breach of a fragile ceasefire negotiated in 2019 and never properly implemented. Meanwhile the leaders of the Russia-backed forces across the line began evacuating civilians, in a move western officials warned may be part of a scripted plan to create a pretext for Russia to start a new invasion of Ukraine.

In the small settlement of Novoluhanske, 2km from the frontline, mortar fire hit Ukrainian army positions on Saturday, severely injuring an officer and killing another nearby, the unit’s commander told a group of politicians and journalists including from the Financial Times who had been taken on a tour from Kyiv the same day.

The visitors, who included David Arakhamia, the leader of Ukrainian president Volodymyr Zelensky’s parliamentary group, were forced to run for cover after shelling broke out while approaching Ukrainian army frontline positions. An FT reporter heard at least two dozen bouts of mortar fire during an hour spent in the Novoluhanske area, before the group was forced to evacuate.

Arakhamia described the degree of artillery fire along the length of the contact line as “exceptional” and at “the highest peak” in seven years. The attacks intensified about three days ago, he said.

Speaking later in the town of Kramatorsk, about 50km from the frontline, Oleksandr Pavlyuk, Ukrainian joint forces commander, said there had been 98 ceasefire violations that day alone, from about three to five daily cases in previous weeks. Two soldiers were killed and four wounded in action, he added.

On Sunday morning, the Ukrainian army was reporting 20 violations including 18 shelling incidents.

The shelling marks a sharp escalation in the conflict in the far eastern Donbas and Luhansk regions. Ukraine and its western backers say evidence shows Russia has been providing weapons and fighters to fuel the separatist war after it invaded and annexed the Ukrainian peninsula of Crimea in 2014. The conflict has claimed more than 14,000 lives according to Kyiv.

Now the west fears a full invasion of Ukraine. The US estimates that Russia has massed up to 190,000 troops along its border with Ukraine and that of Russian ally Belarus. US President Joe Biden warned on Friday that he expected a Russian attack on Ukraine within days.

Maryana Bezuhla, deputy chair of the Ukrainian national security parliamentary committee, said in Novoluhanske that she welcomed western military aid. “It’s not just for defending Ukraine. It’s for defending peace in Europe, ”she said, wearing a flak jacket and helmet.

US officials have warned that any action by Russia would probably start with a false flag operation in the eastern territories held by the Moscow-backed separatists.

On Friday, a string of events inside the breakaway regions led many western observers to conclude that they were following a script. Speaking at the Munich Security Conference on Saturday, US Vice President Kamala Harris described a “playbook of aggression”.

First, separatist commanders reported bomb scares and explosions. Then they warned of an imminent invasion by Ukrainian forces, and later ordered an evacuation of civilians to southern regions of Russia by train and bus.

In separatist-hero Donetsk, residents contacted by phone said the announcements felt divorced from reality. The night the civilian evacuation was announced, a hashtag began trending on local social media: “I stay to live.”

Vladimir Mischenko, speaking via video call on Saturday from his tattoo studio in Donetsk, said people were concerned about increased hostilities. “But I would not say that today we’ve seen some start of active fighting,” he said.

Mischenko, a volunteer reservist in the Donetsk forces, said he did not believe in a staged script, and insisted artillery fire was targeting Donetsk from Ukraine. But when he received a call from local education authorities asking whether he planned to evacuate with his two young children, he declined.

“I do not see the point,” he said, adding that the situation was not even close to what it was like in 2014-15 at the start of the war.

Driving around the city on Saturday, Mischenko saw no columns of buses departing, or lines of evacuees, he said. Petrol and groceries were available. “The apocalypse has not happened, as of today,” he said.

Russian emergency services said more than 40,000 people had been evacuated from the breakaway regions. Videos and photos showed tent cities set up in the southern Russian region of Rostov. In videos of the evacuation to Rostov, some residents expressed fear about the conflict and said they heard increased shelling in recent days.

The FT was not in a position to verify the number of evacuees. However, the two Russian regions bordering the breakaway regions also shared data on how many of them they had received. The Rostov region said that by late Saturday, it had housed 4,000 people, while Voronezh region said it had welcomed 1,000 as of early Sunday.

Western officials have urged Kyiv to refrain from responding to mortar fire.

On the ground in Novoluhanske, Brigadier General Mykhailo Drapatiy insisted that while all his units had been targeted by enemy fire in the past day, soldiers “do not respond to these attacks unless it threatens the lives of civilians or military, a direct threat”.

As the violence intensifies, such a posture gets harder to hold, Arakhamia said: “It’s very hard, psychologically, because they have to sit and not respond.”