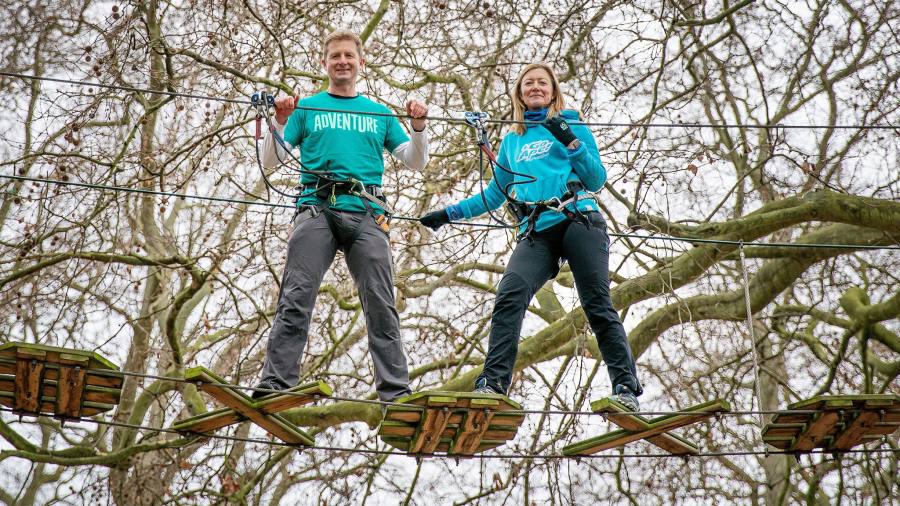 Twenty years before the Covid pandemic made it fashionable for city workers to rethink their lifestyle, Tristram and Rebecca Mayhew quit their London-based jobs as marketing and fundraising managers and relocated to the country. Their move followed a chance sighting of a treetop attraction in France, which inspired them to launch Go Ape.

The Mayhews’ high rope adventure company is now an international brand operating 35 courses in woodland and urban parks across the UK. A sister operation in the US has 14 sites.

The pandemic put it all at risk. Go Ape was forced to close its UK sites in March 2020 due to the government lockdown rules and could not reopen until July, curtailing its busiest season.

The challenge was to keep the company afloat. The process of doing this – in which staff flexibility and willingness to help out was key – convinced the Mayhews to turn Go Ape into an employee-owned business.

The immediate impact of lockdown was that the company’s £ 1.5mn emergency cash reserve was consumed by Go Ape’s £ 500,000 monthly fixed costs even with the sites closed. It survived by furloughing 97 per cent of the workforce and borrowing £ 2mn through the UK government’s Coronavirus Business Interruption Loan Scheme.

Those still required to work had to double up on roles. “We had £ 400,000 of advance bookings that needed to be moved or refunded immediately and our call center did not have enough capacity,” Rebecca, 53, recalls. “It was people like our marketing copywriters, who turned to producing customer care emails, that got us through.”

The commitment of their skeleton workforce made the Mayhews reassess their long-term succession plans. “Our relationship changed with those who remained working to cover customer care and other support roles because of the way we all had to muck in and get through it together,” Rebecca says.

“There is nothing like a crisis to see which people you have who are 100 per cent invested in the company.

“These people clearly loved the [Go Ape] brand, they loved the culture and they showed that they felt the company could do very well if we got through this. ”

Before the pandemic, the couple had started investigating an exit for themselves and the other shareholders.

“Go Ape is all about encouraging people to live more adventurously so it would have been nuts for us to hang on until we are 60 running this business when there are other things we want to do,” Tristram, 53, says.

The Mayhews and their fellow shareholders – Jerome Mayhew, Tristram’s brother, who stepped down as Go Ape managing director to become a Conservative MP, and Will Galbraith, a friend of Tristram from their former careers as British Army officers – had appointed advisers for a private sale in 2019 but the process had stalled, partly because potential investors were concerned about what the management team might look like without the founders. Further, a significant investment – including a new booking system and a recruitment drive – initiated in 2016 with an aim to double earnings had not delivered. Instead, group sales had dropped from £ 27.1mn in 2018 to £ 22.7mn a year later.

“The whole process of seeking buyers was painful, slightly humiliating and it was very expensive, so we ended it,” Tristram says.

The staff reaction during the pandemic convinced the Mayhews to revive an exit option that had been dismissed by advisers because it would not get the highest monetary value for the business: turning Go Ape into an employee owned trust (EOT).

“Covid coming straight after we had abandoned the private sale process was in some ways cathartic and helpful,” Tristram says. Rebecca has a different memory. “You forget the sleepless nights,” she tells her husband.

After discussions with the other shareholders last year, the group agreed a deal where they would sell 90 per cent of the stock to an EOT, leaving the Mayhews with the remaining 10 per cent.

The EOT is governed by a six-person trustee board, which will include two members from an elected staff council and be chaired by Tristram. The purchase of the shares will be funded from future Go Ape earnings, spread over 10 years, to avoid the EOT starting life with a significant extra debt burden.

“It was a real eureka moment,” Rebecca says. “We realized that these people who had enabled us to do so well up to that point and we considered as employees were in fact much more like our family.”

The Mayhews say they were inspired by other British founder-led businesses that have followed the EOT route recently, such as Riverford, the organic farm and food delivery service, and Richer Sounds, the upmarket home entertainment equipment retailer. The couple spoke with both before deciding to take the same route.

Such EOTs are rare. There are just 800 employee-owned companies in the UK, and 250 of these were created in the 18 months since March 2020, according to the Employee Ownership Association.

One of the benefits of an EOT has been the “localism effect” it produces, where the decision making is devolved, according to Malcolm Hurlston, who founded The Employee Share Ownership (Esop) Center in 1988 to promote such business structures.

However, Hurlston is concerned about the way Go Ape has structured its trustee board, noting that three of the six founding members are former shareholders.

Rebecca: I with Jackie Pullinger[a missionary] in the walled city in Hong Kong when I was a teenager. Through her courage and strong faith she brought hope for the hopeless working with the poorest of the poor in this drug infested area of ​​Hong Kong.

Tristram: Field Marshal William Slim, “the soldiers’ soldier”, who in the second world was turned the beaten and dispirited “Forgotten” 14th Army in Burma [now Myanmar] with pragmatic skill and quiet charisma, to ultimate victory against the Japanese.

What was your first leadership lesson?

Rebecca: One of my first jobs was managing sales teams in magazine publishing. The commercial director I worked for was focused and driven but the most important lesson she taught me was the benefits of the outdoor adventures she planned for the teams. We call these at Go Ape “naturally powered adventures” and they have always been available for any of our people to sign up to during the year.

Tristram: The Sandhurst [the British military academy] motto is “Serve to Lead”. It’s been my experience that if you look after your people as you would wish to be looked after yourself (and that goes for suppliers and landlord partners too), the loyalty engendered will pay dividends.

If you had not founded Go Ape, what would you have done?

Rebecca: I would have led or started my own charity.

Tristram: I would have been desiccated away in corporate life until deciding to either rejoin the army, or disappear across the oceans in a boat.

Tristram defends this as a necessary precaution in case of business critical decisions that need to be made before the trust buys out their stakes.

“We chose to give up a right to sign off on the business plan each year, as long as it complies with agreed parameters,” he says.

“However, until 75 per cent of our deferred consideration is paid off – some time in the next seven and a half years – we will have control of the trustee board, which ultimately has the power to remove and replace the MD in a car crash type of scenario. ”

For the 1,000 staff that Go Ape employs on a part-time or full-time basis for its UK operations, the most obvious immediate benefit will be a potentially significant uplift in pay if the business remains profitable. Last year it made a pre-tax profit of £ 4.9mn, although writedowns for the IT investments meant it made a loss of £ 1.5mn the year before.

Tristram says: “For us, it is not about what the business is worth – we made a collective decision about what was fair and reasonable to take out of the business without impacting future success. We created [the EOT] so Go Ape could thrive.

“We had to come up with a responsible way to support the business. We have always felt about this as a family, which we want to have a long future. Why then would we sell to the highest bidder? ”

The Mayhews believe that staff can find new innovations to build the business from what they have achieved. “We are hoping that the result will be more, not less, ambition to grow,” Tristram says.