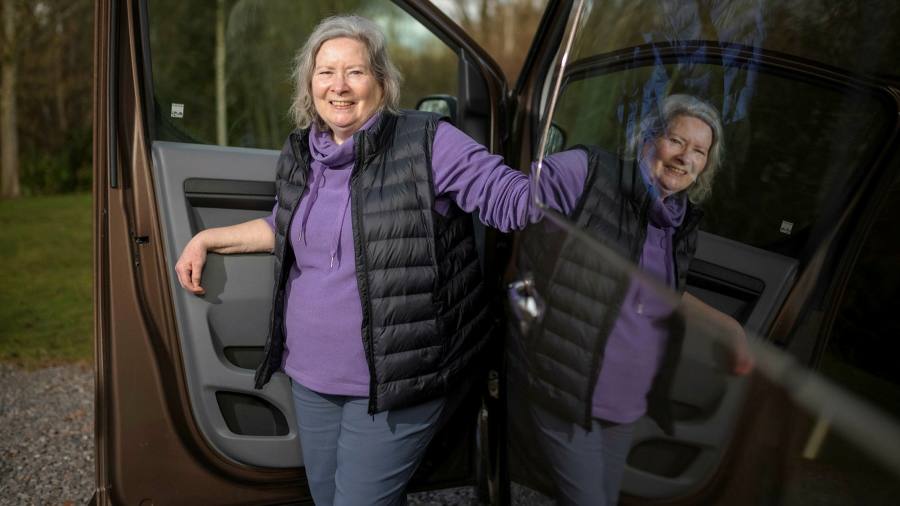 Caroline has not looked back since leaving her job at a pension provider in August 2020. The 62-year-old had already drawn a pension from a previous employer to buy a camper van, cut her hours and spend time touring the UK but before the coronavirus pandemic hit she had expected to work until state pension age at 66.

Her plans changed during the first Covid-19 lockdown as both the frustrations of her job and the attractions of life away from it grew. Working from home on a small laptop was inefficient and exhausting but on the plus side she found it therapeutic to see daylight in winter and grind her own coffee.

So she did her sums carefully and quit. “My income now is a third of when I was working, but I’m not spending a fortune on going to work. I’m spending much less on clothes, petrol, meals. . . I’ve gone back to basics, real basics “she said, adding:” Without Covid, I would still be working. “

Caroline, who declined to give her surname, is part of exodus of older people from the UK workforce. Since the start of the pandemic in March 2020, the number of 50 to 64-year-olds who are neither working nor looking for a job has risen by almost 250,000.

The shift is driving a sharp rise in economic inactivity that is of increasing concern to policymakers against a backdrop of persistent labor shortages. It is a striking reversal of the pre-pandemic trend for people to stay in work for longer – whether through choice or the financial pressures of the rising state pension age – which drove the employment rate for 65-year-olds to its highest since at at least the 1970s.

Organizations that support older workers said that, while some like Caroline were making a deliberate lifestyle choice, many felt forced out of a labor market by ageist recruiters or employers who offered little flexibility for those living with chronic health conditions.

Stuart Lewis, chief executive of Rest Less, an online community for the over 50s, said some early retirees were “happy to live a frugal existence.” But others were leaving the workforce because they had suffered “constant knock-backs in the recruitment process.”

Emily Andrews, deputy director of evidence at the Center for Aging Better, said there was a wide spectrum of people from those making lifestyle choices, to others who had lost jobs and were “desperate to get back in.”

One of those is Adrian Hill, 57, who lost his job in financial administration at the start of the pandemic. “I need to get back to work,” he said, adding that he had managed to find only sporadic freelance work since, while also studying Russian at Sheffield university.

“I had a couple of interviews where the people doing the interview were in their late 20s, and you think, they do not want me, they want someone younger they can mold,” he said. Despite extensive experience with different accounting systems, he feels his best chance of bettering a supermarket job is to teach overseas, in Russia or Azerbaijan, after finishing his course.

Between the two extremes, many older people drop out of work because “the balance of reward to effort is lower than it should be,” according to Helen Barnard, director of research at the charity Pro Bono Economics. She said that for older women especially, the jobs available were often “low paid, low security, below their skill level” while many were also managing a health condition.

Growing numbers were not working owing to long-term sickness, according to official data. But Andrews said that while the pandemic had made matters worse for people grappling with mental ill health or musculoskeletal conditions, the real issue was employers’ failure to offer flexible, part-time roles to suit people with fluctuating health conditions.

People who choose to disengage will not be counted as unemployed, if they have stopped job-hunting, are waiting to hear about job applications or do some freelance work.

Many are reluctant to claim benefits, or are ineligible if they own their own home, have savings or a partner in work. Lisa Griffiths, 62, who left her job as a special needs nanny in early 2020, said privacy was a key factor preventing her from claiming. “My husband would not like that. He’d say, I would not like to disclose our income, ”she said.

She has only worked in brief stints over the past two years, including a catering job that proved too physically demanding. “I do wonder if some of the things I applied for, I did not fit age wise,” she added.

Such a spell out of the workforce – even one intended to be temporary – can have long-term repercussions, especially for women who began their careers expecting to retire at 60 on their husband’s pension. The longer people are out of work, the harder it is to return; meanwhile, they are running down savings without adding to a pension pot.

“It can torpedo your retirement and the standard of living you can get when you’re older,” said Barnard, noting that pensioner poverty, after a long decline, was on the rise again.

Analysts said increasing inactivity among the over 50s was especially troubling at a time when many employers were desperate to hire and complaining of a lack of suitable candidates.

Much of the support on offer for jobseekers is geared towards young people, however. And many vacancies are in sectors such as hospitality and logistics where employers had become used to recruiting young EU migrants – now absent owing to Brexit – into physically demanding work on long hours.

Andrews argued the onus was on employers to reshape work around the people available. “The labor market is providing what has always been there, but the workforce is older,” she said. “It’s time for employers to have a rethink about how they parcel those jobs up.”