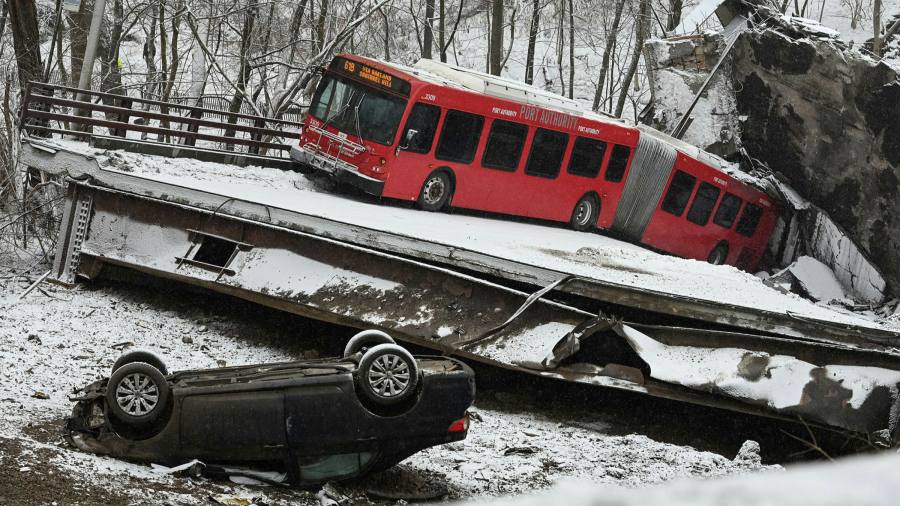 A bridge collapsed in Pittsburgh on Friday just hours before US President Joe Biden flew to the city to discuss the nation’s infrastructure needs and tout the passage of a law to fund improvements in roads, bridges and other critical fixtures.

Biden traveled by motorcade to the bridge site shortly after his arrival in Pittsburgh and stayed for about 15 minutes, surveying the damage with local, state and congressional officials.

“We’ve been so far behind in infrastructure, it’s mind-boggling,” Biden told the other officials. He also spoke with first responders who described hearing a loud bang at the time of the collapse.

Later on Friday, Biden said: “There are another 3,300 bridges here that are just old and in just as decrepit conditions as that one. . . Across the country there are 45,000 bridges in poor condition, that is simply unacceptable. ”

Biden’s visit to the city in western Pennsylvania comes three months after he signed the $ 1.2tn infrastructure law, which won rare bipartisan support for what the president called the most “significant investment in roads and bridges in the past 70 years.”

The bridge, which collapsed early Friday morning, was described by local officials as a main artery into the city, and national and Pennsylvania state inspectors had listed it as in “poor” condition for years.

The 50-year-old bridge on Forbes Avenue cracked into pieces shortly before 7am on a frigid, snowy day, stranding and then trapping a public transport bus. Photos from the accident site showed four vehicles in the ravine underneath the bridge.

Darryl Jones, chief of the Pittsburgh Bureau of Fire, said two passengers on the bus – which had teetered on the edge of the collapse – and its driver were evacuated by rescue workers who rappelled about 100 to 150 feet into the ravine. Authorities said 10 people in total were injured, including first responders who slipped on the icy hills.

UPMC, a health system in Pittsburgh, said four adults who were involved in the bridge collapse were receiving treatment at two of its hospitals. All were in fair condition, Andrea Kunicky, UPMC spokesperson, said in an email.

Jones said a “massive gas leak” had developed, and gas supplies were cut to households across Pittsburgh’s East End. The cause of the collapse is “under investigation”, Jones said.

Local and state officials rushed to the scene. Rich Fitzgerald, county executive for Allegheny County, where Pittsburgh is located, said the White House and Tom Wolf, Pennsylvania’s Democratic governor, had phoned for updates. Pennsylvania was a crucial swing state in the 2020 presidential elections, and midterm races for Congress are attracting a record number of candidates in some cases.

“Thankfully at this point, the injuries are not life-threatening,” Fitzgerald said at a press briefing. But, he added, “a lot of work is going to need to be done”. 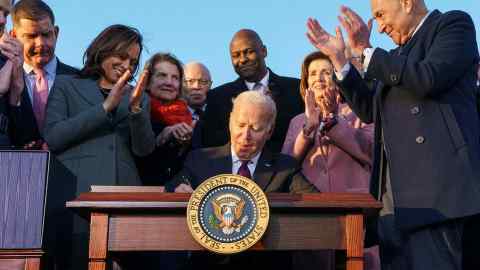 Adam Brandolph, spokesperson for the Port Authority of Allegheny County, said the bridge had collapsed in two different places. The 22-tonne bus will probably have to be cut in half to be removed, he added.

Ed Gainey, Pittsburgh mayor, a Democrat, emphasized that the bipartisan funding bill for roads and bridges “was critical”.

“Today is significant,” he said. “At the end of the day, we could have had some serious injuries. . . It is critical we get that funding. ”

The White House said in a statement that Biden’s team was in touch with local officials who “continue to gather information about the cause of the collapse”.

Transportation investments make up more than half of the about $ 550bn in new spending that the new law provides. The money is to be spent over five years for roads, bridges and tunnels as well as airports, broadband and other infrastructure improvements.