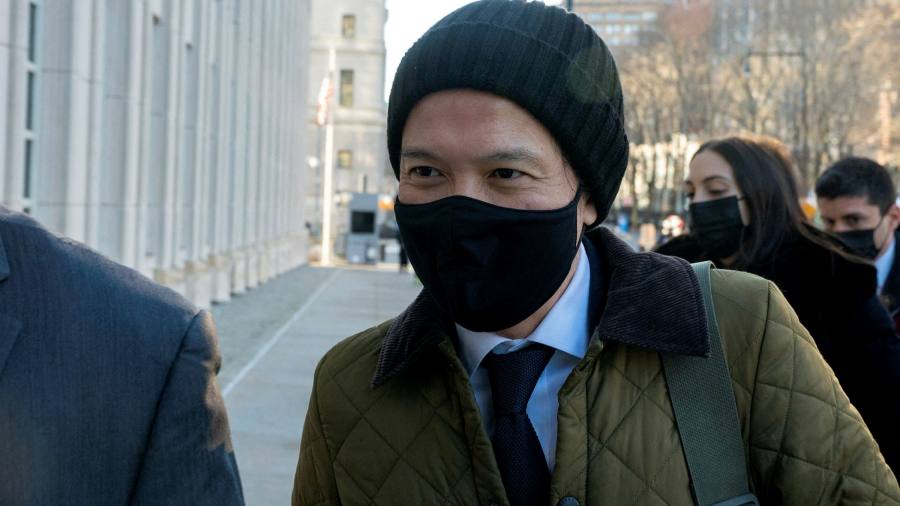 Prosecutors accused Roger Ng of pocketing millions of dollars in kickbacks from the multibillion-dollar 1MDB scandal, as a criminal trial for the former Goldman Sachs banker got under way in New York on Monday.

Ng, 49, a former managing director at Goldman Sachs, was arrested in Malaysia in 2018 at the request of US authorities and charged with conspiring to bribe officials and launder billions of dollars from the Malaysian state investment fund. He was sent to the US to face the charges.

He has pleaded not guilty. If convicted, he faces up to 30 years in prison.

The trial, which was delayed due to the Covid-19 pandemic, has renewed attention on a global scandal that has reached from Malaysia to Switzerland and the US, with American officials labeling it “kleptocracy at its worst”.

The Department of Justice alleges a total of $ 4.5bn was misappropriated from 1MDB, an investment fund set up by the Malaysian government in 2009 to further the south-east Asian country’s development through partnerships and foreign direct investment.

During opening arguments, prosecutors said Ng received more than $ 35mn in funds misappropriated from 1MDB for his role in bribing officials and moving stolen money to offshore bank accounts to “cover it up”.

Ng “saw an opportunity” to use his position at Goldman “to get rich by cheating”, prosecutors said, adding he used personal email accounts to hide the illicit plan.

The US government also argued Ng had cultivated a close relationship with Jho Low, a Malaysian financier accused of masterminding the 1MDB fraud who remains at large and denies wrongdoing. Prosecutors said Ng took chartered jets with Low, sailed on his luxury yacht off the coast of France and attended a star-studded event organized by Low in Las Vegas.

In their opening statement, prosecutors described emails showing that Ng’s wife used 1MDB funds to buy jewelery, including a six carat diamond, and that the couple was considering buying real estate, the prosecutors added.

Prosecutors said Tim Leissner – a former Goldman banker who has pleaded guilty to charges of conspiring to launder money and violate foreign bribery laws in connection with the 1MDB scandal – is expected to take the stand as part of their case against Ng. Leissner has a co-operation agreement with the government in the hope of receiving a more lenient sentence.

Marc Agnifilo, Ng’s lawyer, sought to cast doubt on Leissner by pointing to his close relationship with Low. “Who he’s really working for is Low,” said Agnifilo, adding Leissner had promised the financier he would become a private wealth management client at Goldman after the ex-banker was appointed chair of Asia.

“The government is giving [Leissner] a pass. . . they’re not holding him accountable, ”Agnifilo said.

He said Ng had formed a relationship with Low in response to requests from Goldman to pursue business opportunities in Malaysia, and said Ng had raised red flags early on about the Malaysian financier.

Agnifilo said Ng had “nothing to do” with the $ 35mn payment, a chunk of which was exchanged in connection with an unrelated investment involving the wives of Ng and Leissner.

For Goldman, Ng’s trial is a reminder of one of the biggest scandals in Wall Street bank’s 153-year history.

In addition to Ng, the 1MDB case has primarily implicated two other former Goldman investment bankers: Leissner and Andrea Vella, a former partner at the bank who the Federal Reserve has banned from working in US banking.

The scandal has had knock-on effects across Goldman’s most senior ranks.

Its board of directors called the bank’s involvement in the 1MDB scheme the result of “institutional failures”. Goldman has moved to claw back up to $ 175mn in pay and bonuses from current and former executives, including David Solomon, the bank’s current chief executive who was Goldman’s co-head of investment banking at the time of the bond offerings, and his predecessor Lloyd Blankfein.

Goldman, who said it was led to by “certain members of the former Malaysian government and 1MDB”, ultimately paid a record $ 2.9bn in a global settlement. Its Malaysian subsidiary pleaded guilty to a bribery charge. The bank also struck a settlement of up to $ 3.9bn with Malaysia over losses the south-east Asian country suffered from the scandal.