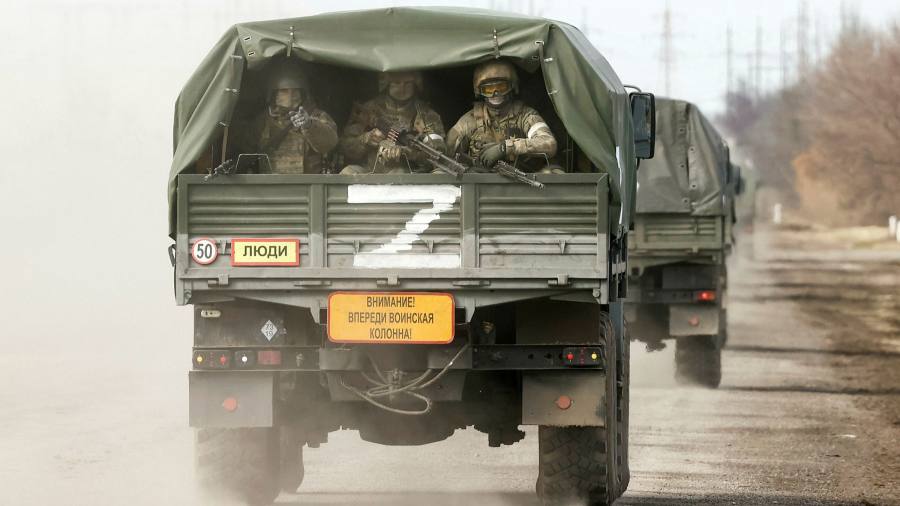 Russian troops have launched what appears to be a full-scale invasion of Ukraine, with thousands of ground troops rapidly advancing in armored columns along various axes. This was preceded by intense air and cruise missile strikes and the landing of airborne troops behind Ukrainian lines. The scale of military operations suggests President Vladimir Putin intends to occupy large sections of Ukraine, east of the Dnipro river, at least in the short-term.

Russian disinformation campaigns, combined with the proverbial fog of war, mean analysts have relatively little certainty about what is happening on the ground. Even so, the campaign is closely following Russian military doctrine for a multipronged ground assault supported by air and maritime forces, as well as operations in cyber space and attacks on everything from wireless communications to radar systems.

While the term hybrid warfare has become almost synonymous with the Russian strategy among many European policymakers, what we are seeing now in Ukraine is the return of a much more menacing, bloodier mode of warfare in Europe: a conventional war of rapid maneuver.

What should we expect? First, Russia’s strategy will be to conduct air and missile strikes against high priority Ukrainian targets, including military headquarters, radar stations, air defenses, airfields, logistical centers and transit routes to prevent reinforcements reaching the frontline.

Second, Russian airborne forces (VDV), an elite high-readiness rapid reaction force, would be helicoptered into positions behind Ukrainian lines. There they would occupy tactically-important terrain, including intersections and bridges, and erect blocking positions to prevent Ukrainian forces from reinforcing each other. Notably, these troops are also capable of landing combat vehicles and artillery behind the front lines. To date, there have been conflicting reports about VDV drops in Ukraine.

Third, battalion tactical groups – a formation of 700 to 900 personnel in armored fighting vehicles supported by artillery, air defense, and electronic warfare units – would attempt to advance rapidly into Ukraine and overwhelm local forces, battering their resistance with massive artillery strikes.

Russian troops are likely to avoid widespread combat in cities given that such operations are manpower-intensive, long-lasting, and bloody. However, they will certainly probe Kyiv’s defenses. Without significant resistance, the entry of the Russian forces into Ukraine’s capital could resemble the 2003 US invasion of Baghdad: swift and with little effort.

As other analysts have pointed out, Russia has only a limited arsenal of precision-guided munitions. Should cities indeed become major sites for fighting, Moscow could use less-precise weapons to bomb these urban centers.

Ukrainian armed forces are at a major disadvantage given the vast stretch of terrain they need to defend. A lot will depend on how they survive the initial Russian onslaught, and on the strength of their morale. They will have to retreat in an orderly manner, re-establish a new front, and mass their formations for necessary counter-attacks. Should the Ukrainian forces mount a serious resistance, there could be a prolonged military struggle, with retreats to a few strongholds in the west of the country. But the options look grim.

The Russian armed forces are not without their weaknesses, including a lack of training and outdated equipment among some units. Combined arms maneuvers – the integration of different weapons systems – are among the most complex military operations, and Russia has limited experience of conducting them on such a large scale. This could point toward a longer war of attrition than Putin anticipates.

But the 2008 war in Georgia, where local troops sometimes proved tactically superior, was a wake-up call in this regard, prompting an overhaul of the Russian armed forces. As a result, the Russians are militarily stronger now than they have been at any point since the end of the cold war.

This is an important wake-up call for those who predicted that future warfare would be dominated by disinformation campaigns, offensive cyber operations, and little green men. In crises such as this one, there is no substitute for strong conventional military capabilities.