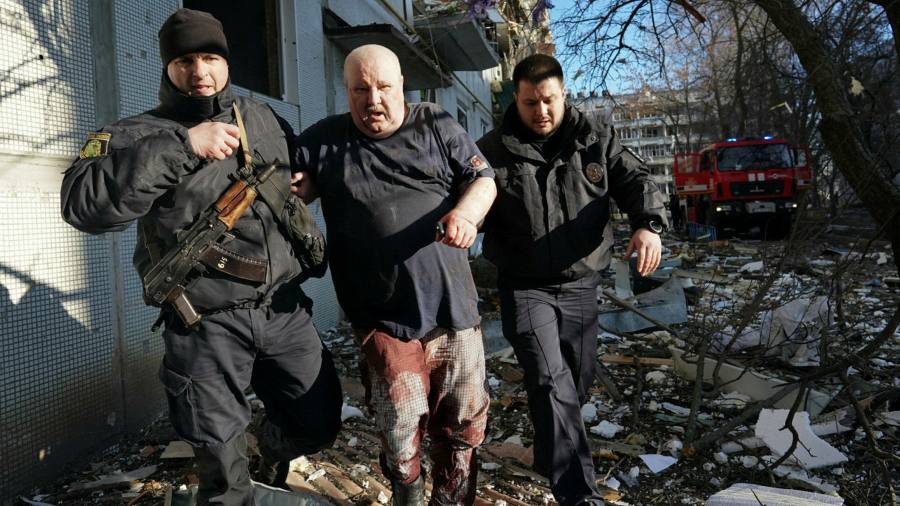 The grim spectacle of Russian tanks rolling into Ukraine has shattered the dream Europe dared to nurture for three decades, that war on this scale would never again be witnessed on the continent. Naked and unprovoked aggression against its neighbor by a country with one of the world’s largest armies recalls the bleakest moments of the 20th century. The overturning of attempts since 1945 to make respect for sovereignty and territorial integrity a founding principle of international relations will have a grave human cost, and repercussions far beyond Europe. The chapter of history opened by the fall of the Berlin Wall, bringing hopes that states could choose their destinies inside a “common European home”, has been closed. A new, darker, chapter has begun.

Putin’s aggression, to be clear, is founded on twin untruths. One is that this is a war of liberation, or “denazification” of Ukraine. For eight years, the Kremlin’s propaganda machine has peddled the lie that the overthrow of President Viktor Yanukovych was a “western-backed, neo-Nazi coup.” There were far-right groups among the broad array of protesters against Yanukovych’s pro-Russian kleptocracy. But they have never been among the post-uprising leaders. Ukrainian democracy is far from perfect, but – unlike Russia’s – it is real. The first freely-elected president since 2014 was a tycoon who made much of his money in the confectionery business. The second, Volodymyr Zelensky, is a Jewish former actor-comedian whose first language is Russian.

The second falsehood is that this conflict was provoked by the west and NATO. In the nearly 14 years since the north Atlantic alliance declared Ukraine and Georgia would one day become members, Kyiv has never been put on a path to joining. The necessary unanimity to admit it never existed, and was unlikely to do so anytime soon. The wisdom of NATO’s post-cold war enlargement to the east will be debated in years to come. But, contrary to Kremlin claims, guarantees were not given that this would not happen. Nor was enlargement something the alliance sought or imposed. It responded to requests from countries which, having spent decades under Soviet domination, wanted to ensure this could not happen again. They will see the invasion of Ukraine as vindicating their fears.

The fact that Kyiv is not a NATO member means the west has no obligation to intervene militarily in its defense. The US and European allies have ruled out doing so for fear of triggering the terrifying confrontation of nuclear-armed rivals that the world has striven to avoid for seven decades. Putin has openly threatened “consequences you have never experienced before in your history” against any nations that interfere in his invasion. But western powers have a moral obligation to provide all possible help short of direct military involvement to Ukraine, a country which they have encouraged to integrate more closely with their institutions.

Military aid to help Ukrainians defend themselves against Moscow’s advance should be stepped up. Russia’s president claims – though he has lied throughout this crisis – not to plan an occupation. It would be an immense tragedy for Ukraine to be dragged into a prolonged and bloody insurgency. Yet the greater the early cost of Putin’s onslaught, the greater the chance that he limits his objectives – or meets resistance at home from Russians, who have strong family and cultural ties with Ukraine.

Western countries need to rediscover the will to contain Moscow that they displayed through the cold war. They should be prepared to use their principal weapon, of economic and financial sanctions, to maximum effect. This is no longer a question of deterring Russia’s president, but of imposing the highest cost for his actions, and squeezing his ability to finance his foolish adventurism. This, too, will involve considerable dangers – of blowback effects, and of Kremlin retaliation, including through threatened “asymmetric” means such as cyber attacks. Accidental or deliberate interruptions to Russian natural gas supplies could send prices to levels that dwarf the highs of recent months, and lead to shortages in Europe. Oil and gas prices are already soaring. Assumptions about economic growth and recovery after the coronavirus pandemic could be overturned.

If they are to defend their freedoms and values ​​by non-military means, democratic allies must be prepared to bear economic hardship – and they should be explaining this to their populations. Countries west of Ukraine must also be ready to open their arms to a potential wave of refugees that could far surpass that from Syria and the Middle East in 2015.

Those nations that might be tempted to side with Russia and help it to withstand international sanctions should think hard. China’s President Xi Jinping has backed Moscow’s opposition to further NATO enlargement. Its foreign minister, though, has called on all parties to show restraint, and resolve the Ukraine crisis through dialogue. Russia’s assault on a country with which China has economic ties defies Beijing’s espoused principle of respect for territorial integrity. True, China has its own ambitions towards Taiwan – which it considers part of its territory. But a global free-for-all in which borders are no longer respected is not necessarily in Beijing’s interests any more than those of its global counterparts.

As in the long years of the cold war, it is vital for democracies to continue their engagement with Russian society and – as far as they can penetrate the fog of Kremlin misinformation – make clear their quarrel is with the country’s leadership, not its people. Russians have been lied to by politicians and state media, but may become increasingly uncomfortable with a war against a “brother” nation. The country’s elites have submitted to Putin as the ultimate arbiter for 20 years because he seemed the best guarantor of stability and their own wealth. He has now launched a reckless war to topple the government of a neighbor. It is not impossible that it will ultimately destabilize his own.