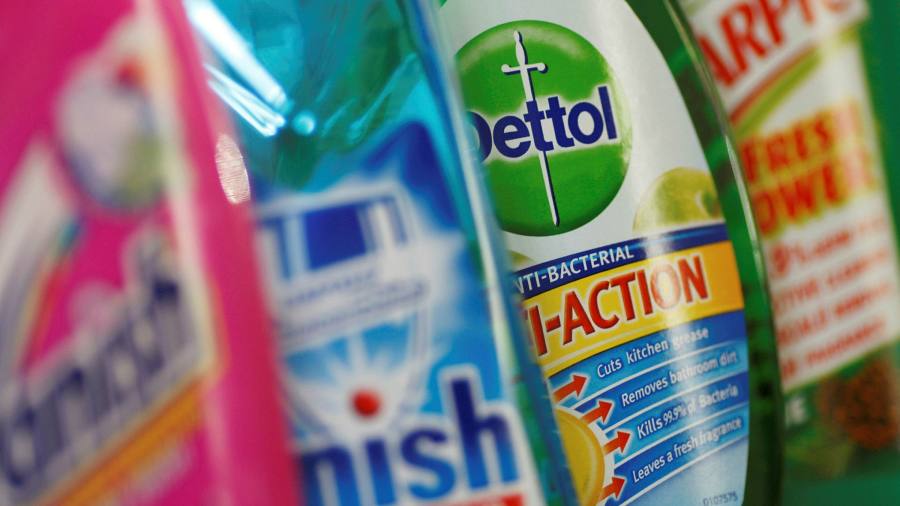 Household goods group Reckitt Benckiser has said it faces hundreds of millions of pounds’ worth of additional costs this year but that it can nevertheless protect profit margins through a combination of price rises, productivity savings and changes in the type of products it sells.

In the latest sign that global inflationary pressures are intensifying, the UK-based maker of Dettol disinfectant and Durex condoms predicted on Thursday that its cost of goods sold this year was likely to rise even more than the £ 550mn increase it endured in 2021.

Jeff Carr, chief financial officer, said soaring costs of soap noodles, tin-plate and a wide range of other commodities that are used to manufacture its everyday consumer products had contributed to 11 per cent average cost inflation last year. Rising ocean freight prices had added to the pressure.

Even so, shares in the FTSE 100 company rose 5 per cent on Thursday after executives reassured investors it could withstand the pressures. Reckitt said it was targeting an improvement in adjusted operating margins from 22.9 per cent to an undisclosed level, as well as like -for-like net revenue growth of between 1 and 4 per cent.

The profitability target is explained in part by disposals Reckitt made last year of its China baby formula and Scholl footcare businesses, both of which produced lower margins than the company average.

Carr said Reckitt had a “lot of levers” to protect margins, including leaner manufacturing practices and “consolidated” media buying. Reckitt said it had delivered £ 1.1bn in savings under a £ 2bn cost reduction plan it launched in 2020.

The Slough-based company joined dozens of other global consumer goods groups in cautioning that prices at the checkout were set to climb further, although it would not be drawn on how much. The company said it would “apply appropriate pricing” in the months ahead.

Reckitt has benefited from stronger demand for disinfectants during the pandemic, as households have turned to its brands including Lysol and Cillit Bang to stem the spread of Covid-19.

Like-for-like revenues in the fourth quarter rose 3.3 percent from a year ago, led by a 17.5 percent jump at its health division.

Narasimhan, who joined from PepsiCo in 2019, acknowledged that his plan to improve Reckitt’s performance had been a “heavy lift” but that the company was now at an “inflection” point. Reckitt was “indisputably a stronger business today than it was in 2019,” the chief executive said.

For the full year, Reckitt swung to a loss before tax of £ 260mn compared to a profit of £ 1.87bn last time as a result of a £ 3.5bn loss on disposals it completed during the period.

The board proposed a final dividend of 101.6pa share, unchanged from a year ago.