Red Bull Racing’s Christian Horner: ‘My job is to push as hard as I can’ 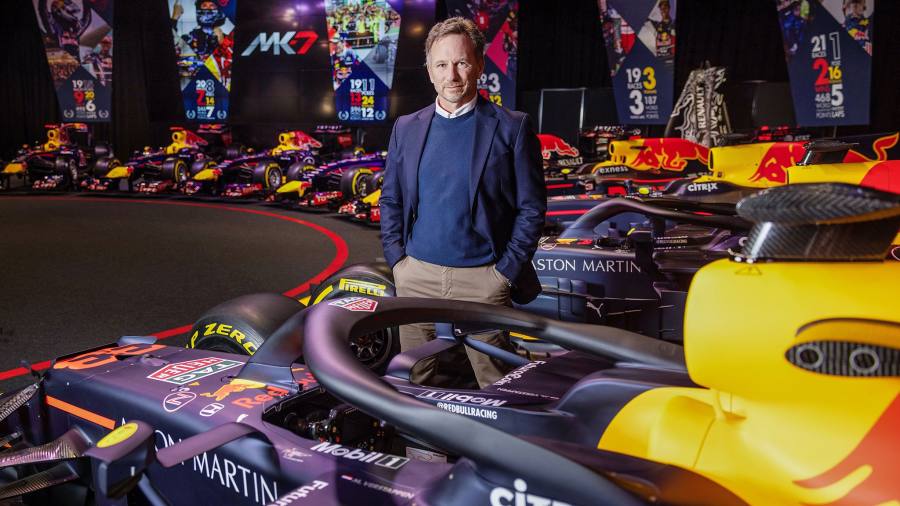 Red Bull Racing chief Christian Horner had just watched Max Verstappen win his first Formula One world championship in one of the most controversial finals in the sport’s history.

So instead of a triumphant celebration, Horner spent the immediate aftermath of the race fighting his team’s corner as rivals at Mercedes, which had won the driver’s championship for seven consecutive seasons, protested the result.

“After the competitiveness of the season, there was always going to be some controversy,” Horner says in an interview at Red Bull’s Milton Keynes campus. “We read the situation correctly, reacted appropriately and got the result.”

Verstappen and Mercedes rival Lewis Hamilton, statistically the most successful F1 driver in history, had arrived in Abu Dhabi equal on points. But all looked lost for Red Bull as Hamilton dominated the Grand Prix and put himself on course for a record-extending eighth title. That was until a driver further down the grid crashed and put racing on hold.

What unfolded was a drama fit for the new generation of fans raised on Netflix’s F1 series, with the Fédération Internationale de l’Automobile, the sport’s governing body, forced to launch an inquiry and acknowledge that its handling of the crash was “tarnishing the image of the championship ”.

Away from the television cameras, Horner strikes a far calmer demeanor than when he hit out at Mercedes’ “desperate” protests in the immediate aftermath of the race, answering questions quietly in his office. Horner, 48, who is married to pop star Geri Halliwell, quips that he’s still the youngest team principal in the F1 paddock when reminded he’s the longest serving. He has held his role since Dietrich Mateschitz, owner of the Red Bull energy drinks brand, appointed him in 2005 at the age of 31 to lead the billionaire’s newly acquired team.

Having previously enjoyed successes with his own racing team outside F1, Horner joined Red Bull at a time when the sport was still run by Bernie Ecclestone, who likened his own rule as racing supremo to that of a “benevolent dictator”. That all changed in 2017 when US group Liberty Media took over in an $ 8bn deal and transformed F1 for the digital age, investing in social media and taking fans behind the scenes in a Netflix documentary series.

As one rival notes, Horner’s willingness to scrap for Red Bull has been undimmed by his 17 years in the sport, a quality that he uses to motivate his mechanics and staff while drawing on his experience to navigate the technical challenge of competing in F1.

“Once you’ve experienced winning, you know, it’s almost like an addiction. You do not want to lose that, ”he says. “You want to experience it again and again, and again.”

But not even a leader with his experience could have predicted the culmination of an intense rivalry in a season of collisions between Verstappen and Hamilton, Horner and Mercedes boss Toto Wolff, whose off-track clashes became a story in their own right throughout the year.

The controversy centered on how race director Michael Masi handled the aftermath of the crash, which forced drivers to follow a so-called safety car at reduced speeds to protect them.

Once you’ve experienced winning, you know, it’s almost like an addiction. You do not want to lose that. . . You want to experience it again and again, and again

At such a late stage, when it looked entirely possible that racing would not resume, Horner knew he had to speak up for his team.

“Why aren’t we getting these cars out of the way? We only need one racing lap, ”he urged Masi via radio.

Masi allowed the cars to move, without implementing the same rule elsewhere on the track, and called in the safety car early rather than waiting until the end of the next lap as suggested by the rules.

With fresh tires, Verstappen bore down on the disadvantaged Hamilton, made the pass, defended, and crossed the line. Horner’s driver had won but confusion reigned as viewers struggled to comprehend Masi’s interpretation of the rules.

Wolff, who owns a third of the Mercedes team, later claimed that Masi had left Hamilton “like a sitting duck” with a “freestyle reading of the rules” that “robbed” Hamilton, although Mercedes ultimately decided against going to the FIA’s International Court of Appeal.

The FIA ​​has since removed Masi from the role of race director. It was also a reminder that drivers do not hold their fate in their hands, but Horner has no regrets. “My job is to push as hard as I can for the best interests of this team [and] if I was not doing that I would not be doing my job properly, ”he says. “I’ve complained a lot to the race director in the past and nothing’s happened. I was aware that there was pressure. . . from the other side so you just try and counter that pressure. ”

It was Horner’s first significant trophy since he led Red Bull to four consecutive double championships from 2010-13, a period of success that was ended by the emergence of Mercedes, and Austrian manager-shareholder Wolff.

Critical to breaking Wolff’s grip was retaining Verstappen throughout the lean years. So how did he convince the talented driver to stick around while Red Bull’s car could not catch the Mercedes? “He’s been great, he had opportunities to go to other teams, he stayed loyal and believed in the project,” says Horner. “I think it’s based on trust and relationships. . . he could see the commitment that was being put in from the shareholders. ”

The decision in 2018 to switch from Renault to Honda was another “catalyst”, he says, as the Japanese group developed an engine capable of beating Mercedes.

More recently, says Horner, the rivalry has intensified because of Red Bull’s new Powertrains division, which is building engines for the team following Honda’s decision to exit F1 at the end of the 2021 season, leading to competition for staff.

The competitiveness between the two teams rose further when Verstappen and Hamilton fought so fiercely for the 2021 championship.

Who is your leadership hero?
Alex Ferguson [the former Manchester United manager]

If you were not a team principal, what would you be?

Off the track, the acrimony reached boiling point at the Qatar Grand Prix, where Horner and Wolff shared the stage at a press conference, as the Red Bull chief questioned whether the design of Mercedes’ rear wing had been designed to flex in a way that did not comply with the sport’s rules in order to gain a speed advantage. Mercedes rejected the accusation.

While both men stressed mutual respect, Wolff said the “gloves are off”, while the Red Bull chief hit back: “I do not need to go to dinner with Toto, I do not need to kiss his ass.”

When the drivers made contact on the track yet again in Saudi Arabia, Wolff took it out on a pair of headphones. “The fact that he was getting agitated, he did lose it, so publicly, he’s never been in that position before, he’s never been challenged, he’s never been pushed, and we did that as a team,” says Horner. . . suddenly you saw Toto in a whole new light. ”

But at what cost? Verstappen won the championship but the question is: has the draining title race distracted Red Bull from preparing its new car for this season, amid an overhaul of F1’s technical requirements?

“Will there be a curveball and somebody else has thought of something we haven’t?” he asks. “I’ve got every confidence that we should have a decent car.”